Suppose you are a spy who needs to infiltrate an enemy base that is teeming with villainous Germans. I know, it’s hard to picture Germans as the bad guys, but work with me here. Now, suppose you come to a room that has a security camera panning back and forth, and two guards talking in front of a door that you must go through to proceed. What do you do?

(a) create a small distraction to lure the guards away from the door, and then sneak through when the camera isn’t looking

(b) listen to the guards’ hilarious conversation about [monkeys, whether beer turns people into criminals, etc.] and hope they leave the area once they’re done yakking

(c) disable the security camera with a fancy techno-gizmo, then shoot the guards with your silenced pistol

(d) hurl a grenade to take out the camera and the guards, then kick down the door with your submachine gun blazing

If you’re playing The Operative: No One Lives Forever, any answer is the right one: to accomplish your objectives, you are given free reign to use stealth, patience, cleverness, brute force, and your older brother as you see fit.

Set in the 1960s, No One Lives Forever puts you in the Go-Go boots of Cate Archer, a strong, sharp, sexy female superspy who fights against the forces of the evil organization known as H.A.R.M., as well as rampant male chauvinism. H.A.R.M., like any good evil organization, has nefarious plans to unleash something sinister upon the world if its demands are not met. Cate Archer is the one operative who can take on the missions of reconnaissance, espionage, and wanton destruction that will ultimately put a stop to H.A.R.M.’s odious plans and prove that a woman is just as capable as a man when it comes to blowing up cars and shooting security guards in the groin with a harpoon.

Over the course of the game you’ll travel to such exotic locales as the streets of Morocco, ancient ruins in the jungles of South America, a chateau in the Alps, a space station in low orbit above Earth, and a reception desk in Bumberton, England. You’ll use all sorts of gadgets, including a perfume bottle that spritzes sleeping gas, powder that dissolves enemy corpses that you don’t want to be seen, and lipstick grenades. You’ll fight helicopters, scuba-diving assassins, sharpshooting women in short skirts, and fez-wearing thugs. And you’ll wear bunny slippers. For quieter sneaking, of course.

Depending on the mission, you’ll find yourself squaring off against a near-endless stream of snipers to see who’s quicker on the draw, hopping into a snowmobile to escape (and run over) the bad guys, figuring out how to disable a rocket before it fires its engines and burns you to a crisp, cleverly talking some information out of a person or two, and finding a way to survive after falling out of an airplane without a parachute. And, as always, there’s the obligatory “escort the helpless scientist” mission, except—get this—the scientist actually gets out of the way when gunfire erupts in the hallway. Smart man, scientist dude. Smart man.

There’s more than enough variety in the locations, weapons (and ammo types), gadgets, enemies, and challenges to keep the game consistently interesting, and there’s a surprising amount of replay value considering NOLF was released long before the Achievements craze started sweeping the FPS scene.

Beyond the option to either sneak around or cause a ruckus, you can choose which weapons and gadgets to take with you on each mission. Is the AK-57 not subtle enough? Switch it up with a sniper rifle or a crossbow. Is the revolver too small for you? Try a rocket launcher disguised as a briefcase. Whoo! Kablam! Variety is the spice of life, they say, and I think Emeril Lagasse would be pleased by the amount of BAM! in this game.

Also adding to the replay value is the presence of intelligence items in each level—blueprints, photographs, letters, memos, etc.—that are often well-hidden and/or randomly placed each time you play. The documents you find usually shed some light on the plot, and if you pick up enough intelligence items, you gain bonuses such as an increase to the amount of ammo you can carry. But, more importantly, many of the intelligence items are hilarious. 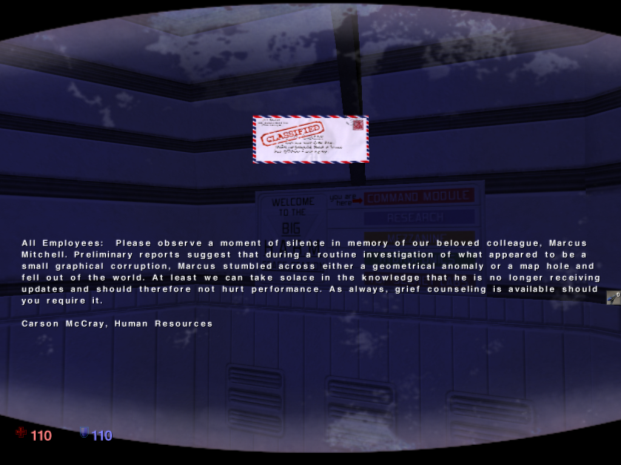 Humor is a big part of the game, but given that the fate of the world hangs in the balance, it’s to be expected that there are some serious moments as well. The serious doesn’t always blend so seamlessly with the funny, but the heavy consequences of being entangled in international espionage make for a more substantial game; the characters are deeper and more dynamic as a result.

Indeed, the characters are one of NOLF’s numerous strong points; many of the characters are caricatures, to be sure, but they’re rather lovable (or love-to-hate-able). Cate takes orders from the kindly and optimistic Mr. Jones and his grumpy and sarcastic counterpart, Mr. Smith (Men in Black reference, anyone?). She faces off against the likes of Magnus Armstrong—a loud and proud Scotsman—and Inge Wagner, whose singing is the real reason the Allies attacked Germany. And even the myriad nameless goons Cate guns down have plenty of personality.

Although the character models aren’t as charming today as they were when NOLF’s graphics were top-of-the-line, their distinct, vaguely cartoony style has helped them to age just a touch more gracefully than, say, the character models from Half-Life. The environments hold up better, though: there are many rich and detailed textures, the level architecture is often creative and fun to look at, the lighting is exceptionally well done, and there are a great many little touches that contribute to the atmosphere: Nuts and bolts fly when your motorcycle crashes into a tree; you leave behind footprints as you walk through the snow; and at one point while exploring a wrecked ship at the bottom of the sea, the walls start to compress due to the pressure—so cool.

The sound is equally impressive, which is especially important in a game with an emphasis on stealth (and making things explode). Different surfaces make different sounds when you walk on them, and enemies are more likely to hear you if you’re sprinting over metal grating instead of duck-walking over a shag carpet. Likewise, you can tell where enemies are patrolling from their footsteps and the aforementioned funny conversations, which are a pleasure to listen to not only because they’re funny but because the voice acting is top-notch. The roles were cast perfectly, and some of the characters’ accents are delightfully over-the-top.

As far as the other sound effects go, The Super Atomic Laser Weapon sounds like a Super Atomic Laser Weapon, the Snozzberries sound like Snozzberries, and everything all across the board sounds just right. The music is spot-on as well: it captures the essence of the 60s most of the time, and it’s groovy, relaxed, tense, subtle, and frantically energetic in all the right places. A few of the songs are reused toward the end of the game, which is a bit of a letdown, but that is truly the only aspect of the game’s audio that is anything close to a disappointment.

Really, there’s very little I can say about NOLF that isn’t positive. It’s true that a few of the pre-mission cutscenes with Mr. Jones and Mr. Smith can drag on longer than this review (unlikely, but true) because they’re largely exposition and frequently lack humor, and the slightly tricky boss fights can be oppressively un-fun until you figure out what you’re supposed to do, and the vehicles are somewhat clunky to drive, but other than that, any weak points or negative aspects of the game are too minor to get caught up on (says the guy who pointed out that Proto Man’s four-seconds-long whistling theme in Mega Man 8 sounded terrible).

Thus, it’s no surprise that NOLF won the award of Action Game of the Year from PC Gamer, Computer Games Magazine, and Computer Gaming World. Consequently, a “Game of the Year” edition of NOLF was released that includes an all-new mission at a tropical resort that takes place after the end of the original game, plus some swag such as a strategy guide and bonus music CD (but those are outside the scope of this review, so pretend like I never said anything). This extra mission isn’t anything groundbreaking, but it’s good fun; part of it takes place inside an active volcano (Cool! I mean, uh… Hot!), and the villains sport preposterous monkey masks, so it’s definitely worth playing. Ook ook.

NOLF also features a decently robust multiplayer mode that can support up to 16 people, but the lack of computer-controlled opponents means you can only play against humans, which is unlikely to happen; despite the praise and recognition NOLF has received, the sad truth is that I don’t have any friends. Who play NOLF.

So, if you ever manage to find other humans (or acceptable facsimiles) in possession of a copy of NOLF, there’s an enjoyable multiplayer experience to be had in such levels as a subway, a gigantic chessboard, and a hockey rink with functional Zamboni.

Still, the real fun is in the single-player missions. The characters and atmosphere create an immersive and memorable experience; the story, humor, and variety keep the game fun and interesting; and the level of choice and flexibility you have adds to the game’s replayability and helps to give it a broader appeal than most first-person shooters. All things considered, No One Lives Forever is one of the finest FPS games of its time, and—oh, I’m being shot at.

Hey everyone, and welcome to another edition of Inside the Guide. In this column, I discuss games that I've written GameFAQs guides for. This month, there's a slightly educational bent, as I talk abo