Mr. Rescue is a game where you play as a fire fighter, rescuing people from burning buildings. The game plays out in a familiar format: You make your way vertically through levels, avoiding obstacles and collecting power-ups so you can save more people and get the high score. Watch your water level and heat gauge! The gameplay itself is pretty simple, but it’s pretty challenging to make it through a whole building without overheating. 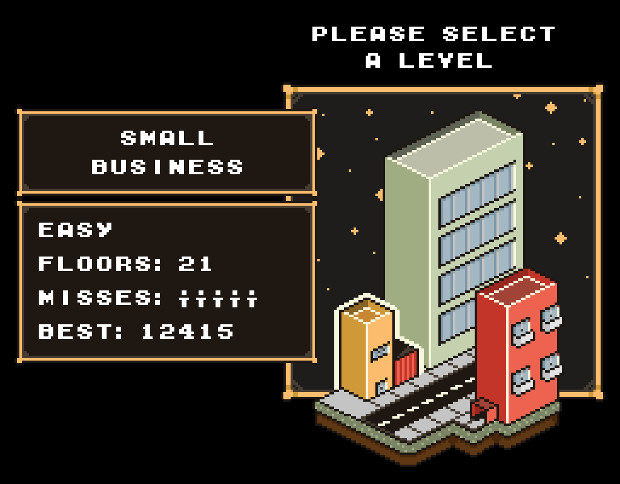 The name is also a little more literal than you might expect from the screen shots—it’s explicitly stated in the instructions that your job is to rescue people, not to put out fires. If you take too long, people can catch on fire and, uh, be “missed”, with a limited number of misses per building before you lose. You can also miss people by climbing the ladder to the next level before saving everyone, which can be harder than it sounds when there’s no way to tell where everyone is without risking running through flames. Want to put out the fires instead of running through them? Trying too hard to put out all the fires will mostly lead to you running out of water and overheating your suit. Get used to seeing the message below.

Still, I have to give it to the developers for making a fun and creative game. I like the graphics, I like the music, I like the concept. I mean, did I mention the part where “rescuing” people involves picking them up and tossing them out the window? Like, you don’t just reach the person and get your points—you have to pick them up and throw them through the window. You can also throw them at doors to break them down instead of wasting your precious water. And if you throw more than three people through a window in a row, you get a combo bonus!

Checking out the developer’s itch.io page, folks who have been around itch.io for a while may recognize another game or two, and I really look forward to any new games they might come out with. Mr. Rescue is available for “pay what you want”, which generally translates to “free”, but I’ll always encourage people to donate a little bit. If you enjoyed the game and want to see more like it, the only way is to support the developer!

It isn't often that somebody sits down to play a browser-based Web game unless they're trying very hard to avoid doing something productive with their time.  Unfortunately, it seems that most popular