Really, this opens it better than I ever could. 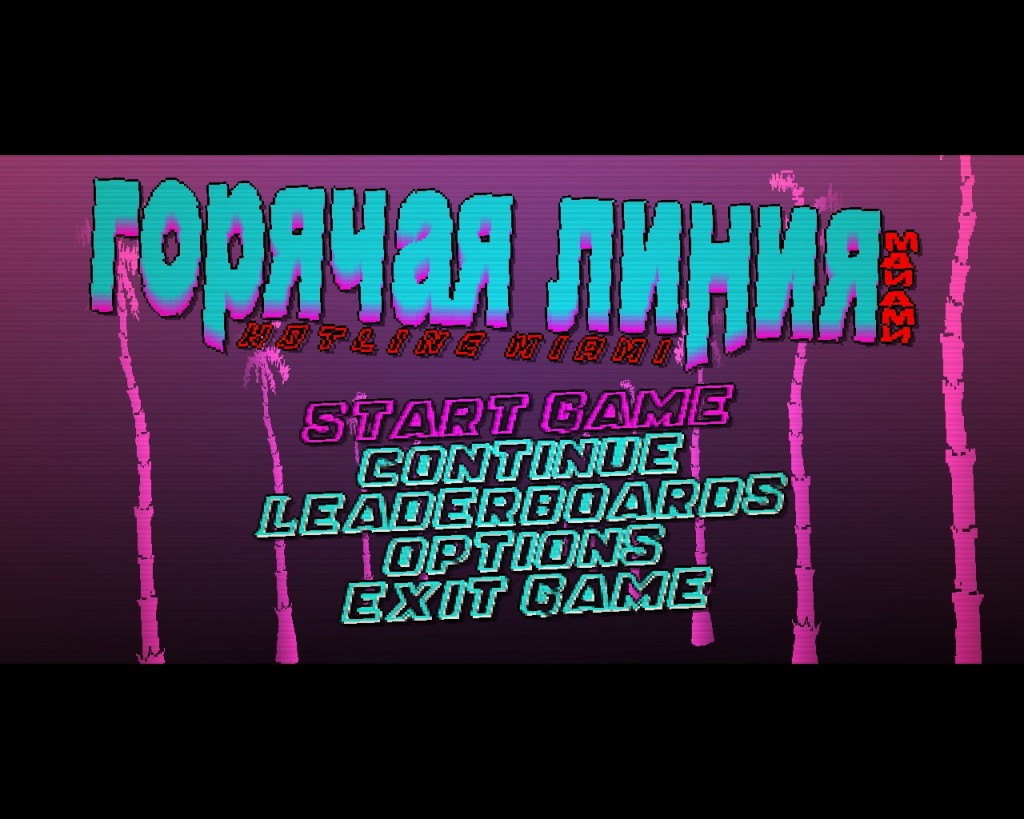 I…this is the English localization, right?

Hotline Miami is a top-down action game with heavy puzzle elements. You play a man in a letterman jacket who follows mysterious phone calls to different places and murders everyone in the building. The graphics are reminiscent of the original Grand Theft Auto games, except they’re bright and vibrant to contrast with the grit you’re thrown into. The music is pulsing electronica, flowing into the gameplay and driving the violence of the game. It’s intense, violent, visceral, satisfying, and honestly leaves you questioning why you’re doing this. 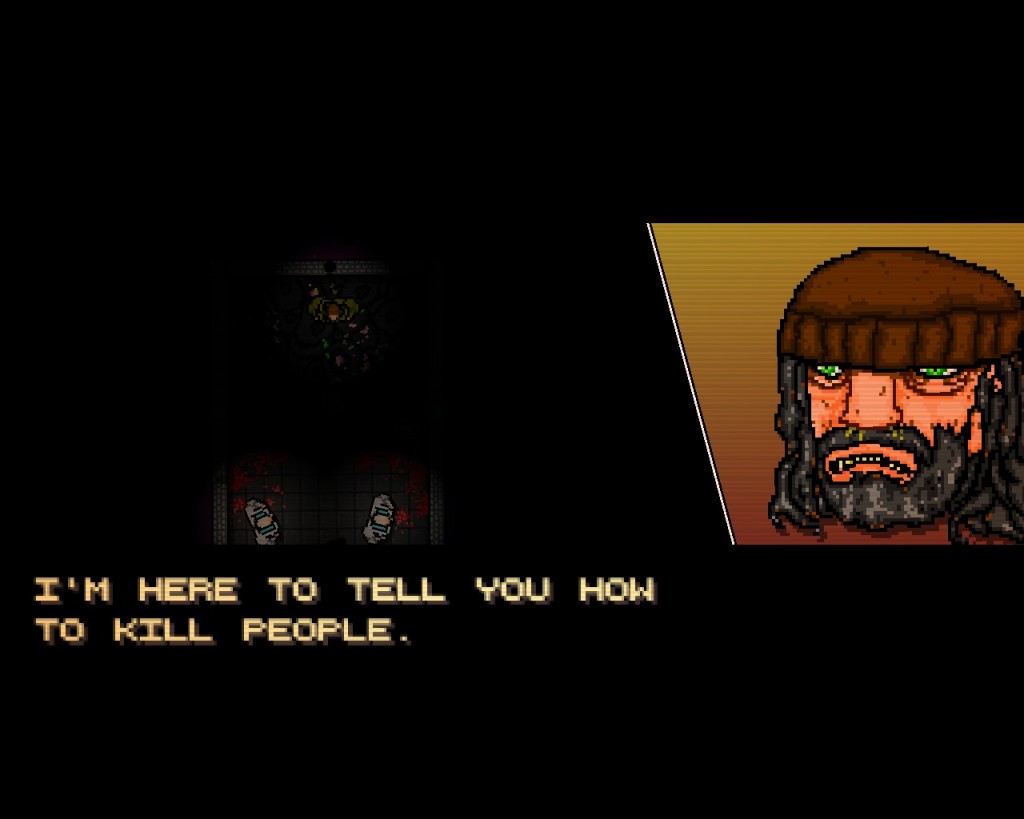 At least this game’s honest with its intentions.

The gameplay in Hotline Miami is simple and deceptive. You move with the WASD keys, attack with a left-click, manipulate objects with a right-click, and finish enemies with the spacebar. Though the game’s very action-packed, it’s also very much a puzzle game, where the puzzle is simply, “How can I kill everyone in this room without dying?” This creates an interesting juxtaposition where you must be careful and pay attention, but the action pumps your blood and keeps you moving. You solve the “puzzles” of the levels by picking a mask, picking up weapons, and of course killing everyone you see. You unlock new masks by completing levels and new weapons through the points you get at the end of each level. The gameplay is fun and engrossing, levels are over quickly and painfully, and you’re left at the end with your heart pounding and shortness of breath. 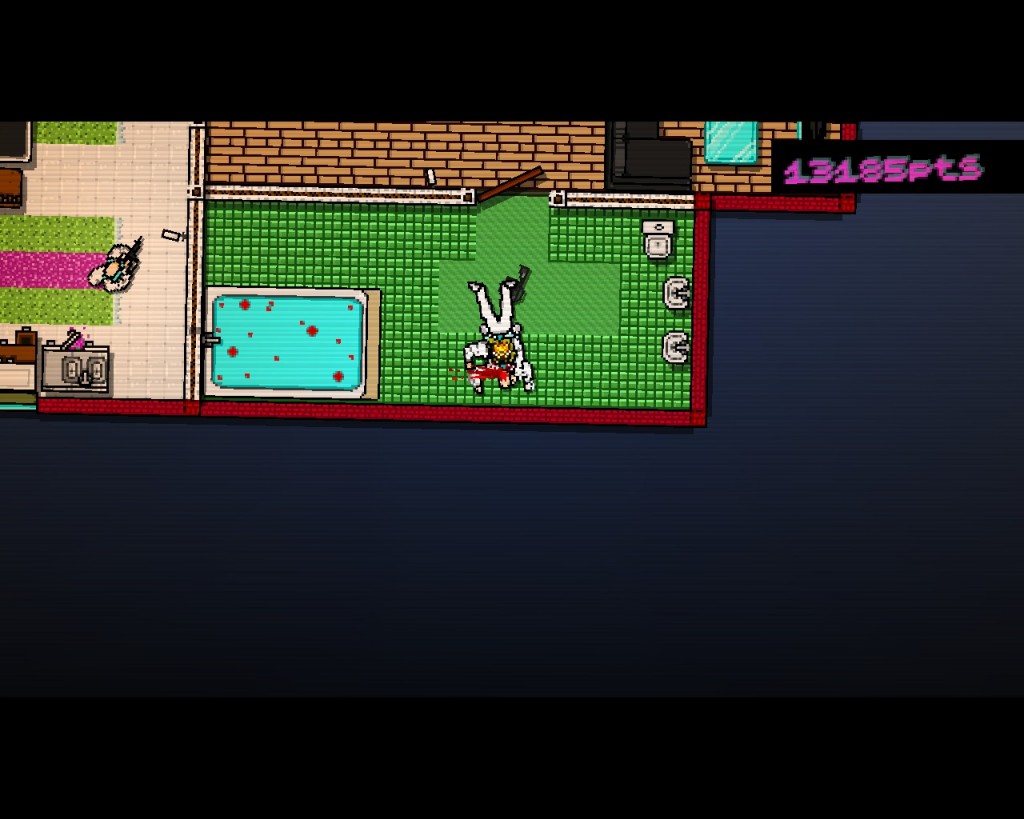 You get more points for performing brutal finishing moves on defenseless enemies.

Honestly, Hotline Miami is a work of art, overall. The graphics are vibrant and stylish, representing an older graphical quality but smoothed out and improved. The music is pulsing, visceral techno driving you through a game that should be played carefully. The story is based off of fact, following a historic incident with a stylized take on the violence of an era. As well, the story itself is without real explanation, leaving you without knowing anything until the very end. Even then, though, you’re still left wondering what really happened. Hotline Miami is an artistic game that uses its assets to drive you through the game, leaving you almost feeling like you were compelled by the music, the graphics, and the story itself. 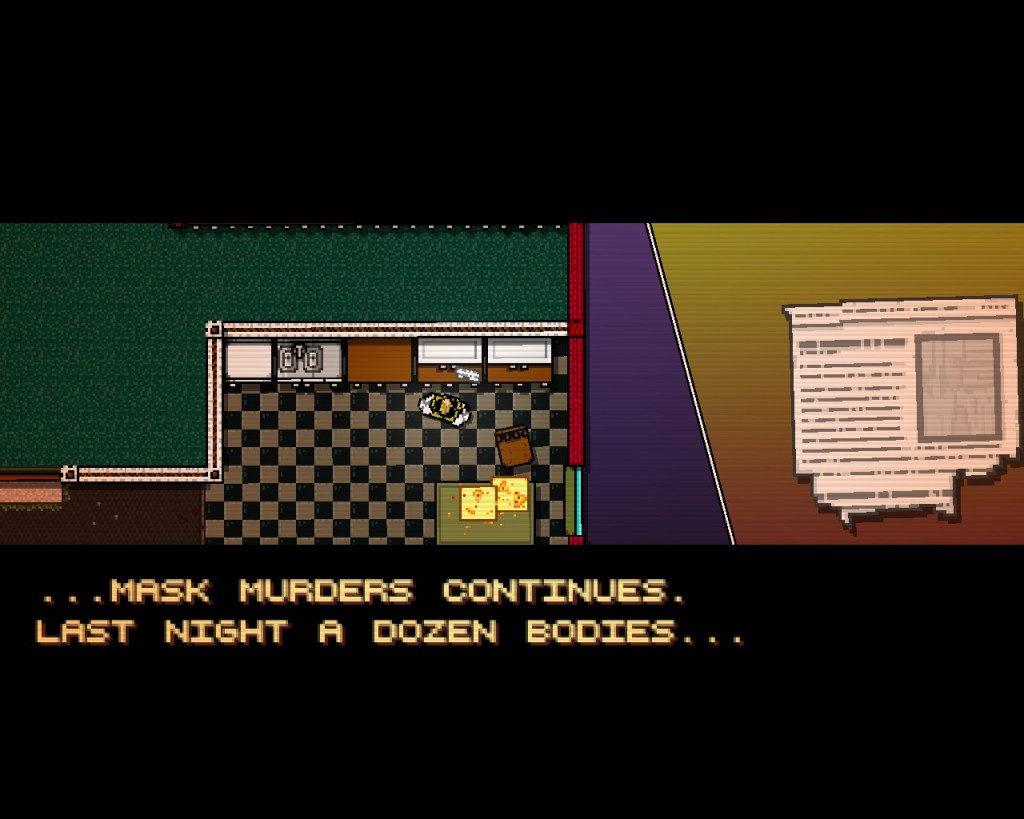 Hotline Miami‘s story seems simple but really ends up being highly complex. You start getting strange letters and answering machine messages. These messages cause you to go out and murder criminals and gangsters for no apparent reason. As the game goes on, you’re visited by hallucinations between missions, and find news clippings of your adventures. The story was heavily inspired by Cocaine Cowboys, a documentary about the drug trade in Miami during the ’80s. David Lynch‘s films also play a huge role through inspiring the violent and surreal style of the game. The narrative overall is rather bare-bones, and the unreliability of it all is perhaps most compelling. At the end, you’re left wondering what happened, the events of the game provided without closure. 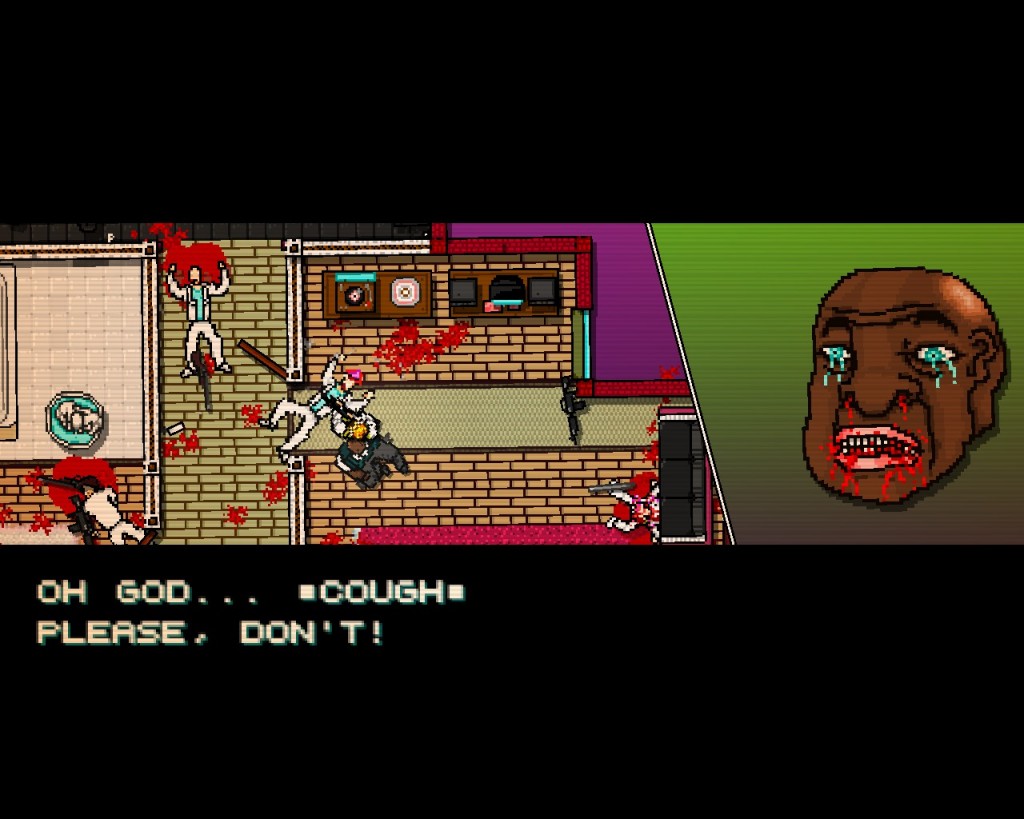 Sometimes things can look a little…silly…

However, no game is perfect; Hotline Miami is no exception. Representation is a mixed bag—of the two playable characters, both are men, and the one woman in the story who speaks does not get respectful treatment in the plot. Though one of the characters is shown to be bisexual, that really is all the positive representation present. Levels often feel like trial and error, with the very way the game was designed forcing you to die over and over if you can’t find the right way through. The biggest gameplay issue is that, since you can walk through enemies, it gets really hard to move through a room while clearing out your foes.  Story-wise, the game ends on a low note, making you wonder exactly what you’ve done (honestly, a gift and a curse). I don’t feel the flaws distract too severely from the quality of the game, though. 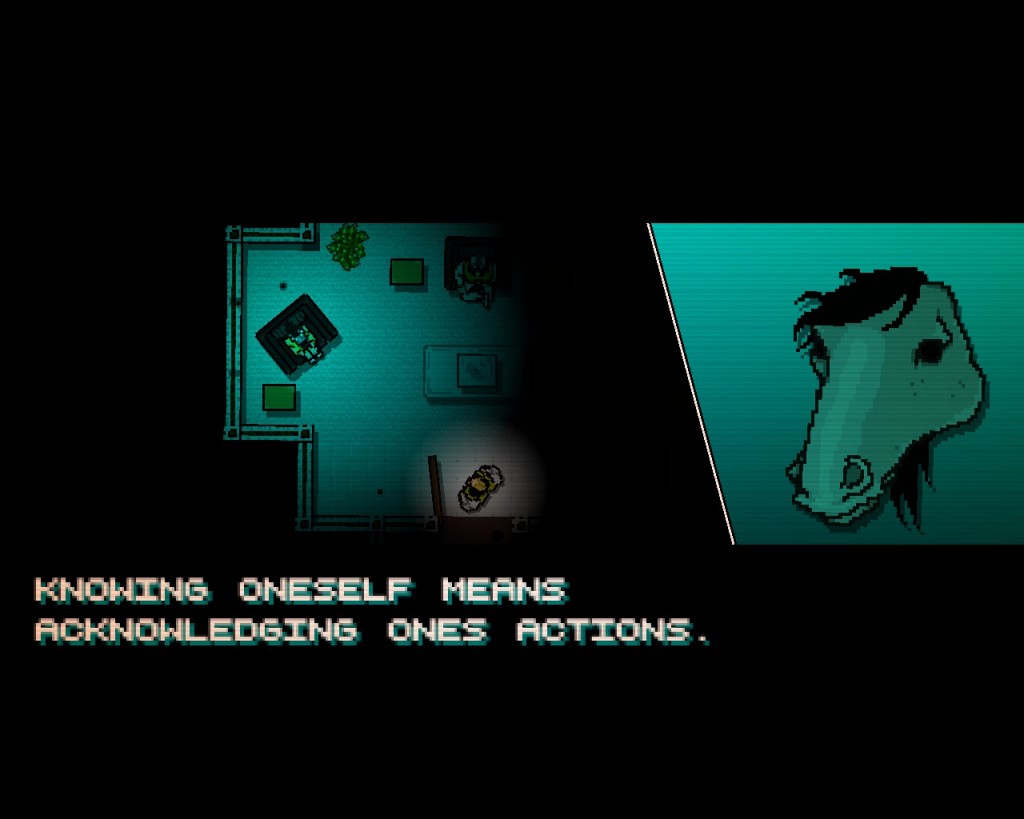 And at the end of it, just what have we done?

I highly recommend Hotline Miami. A tale of indie triumph, developed by two people going through a rough time in their life, that competed against AAA titles and won, even seeing a sequel! Hotline Miami is well worth every penny, especially if you enjoy violent videogames that make you think. 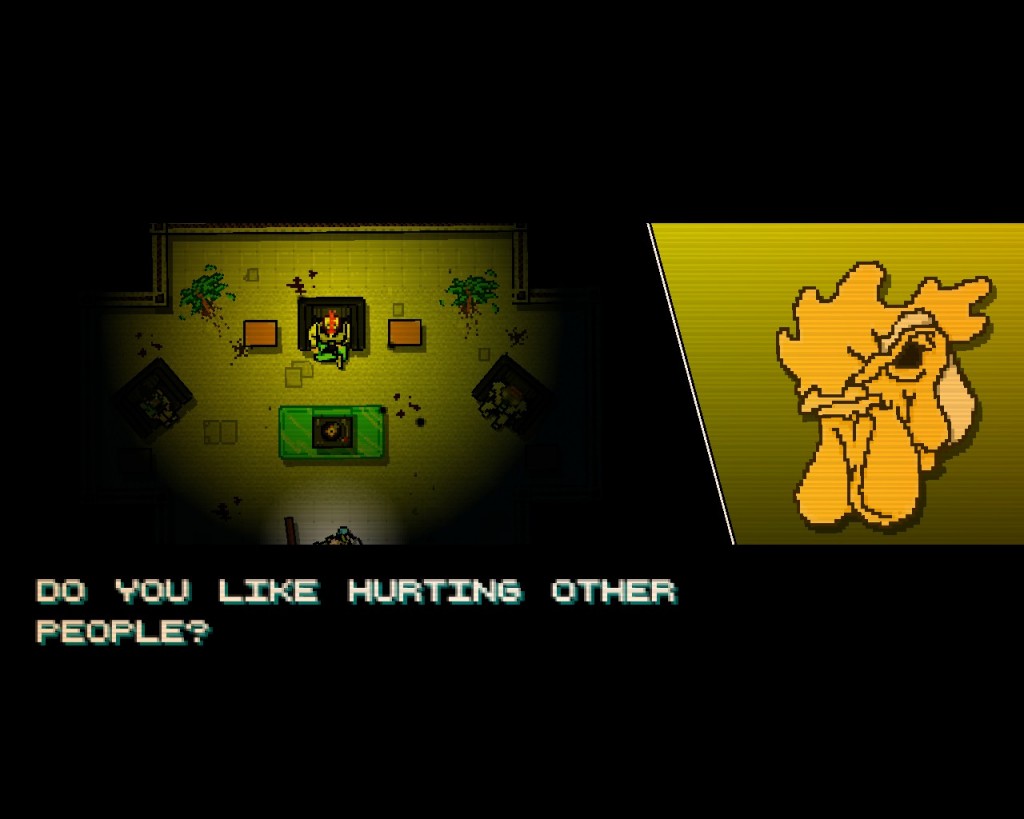 What do you get when you mix together elements from The Lord of the Rings, classic point-and-click adventure games, and that annoying guy from high school who always quoted Monty Python all the time?