The journey begins anew and without filler.

Let it be known across GameCola that I enjoy my One Piece. Eiichiro Oda’s incredibly successful series about Monkey D. Luffy and his band of merry pirates has been one of my favorite things ever since I was in high school. I’ve grown up with One Piece—and it’s grown with me. Needless to say that when the first installment of One Piece: Pirate Warriors was released, I was ecstatic. Two of my favorite things were being combined. How could this be bad? Well, it kind of was. I walked away from that title disappointed; so much so that I went and skipped the second installment altogether. I was wary of this third title, but at the urging of some friends I gave it a try. And like One Piece, what started as a slow burn developed into something very enjoyable. 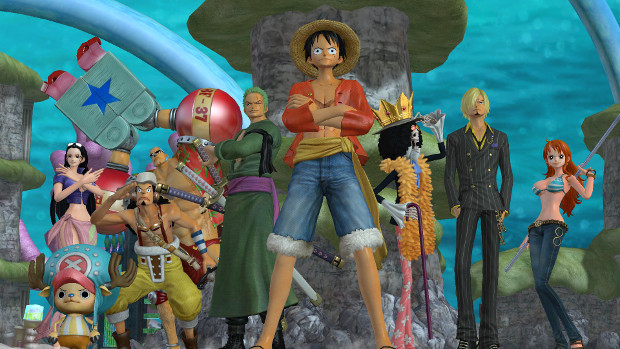 The gameplay of One Piece: Pirate Warriors 3 is your standard Warriors fare at its core. You’re impossibly strong. There’s lots of bad guys. Go and beat them up. The AI characters need your help because they’re incompetent. This is enjoyable enough on its own, but Pirate Warriors 3 adds some nice new features to shake things up.

The big feature that really sets this title apart from the rest of the Warriors titles is the “Kizuna Rush” system. As you fight, you slot a few of the available One Piece characters on your side as Assist Characters. At first, they won’t really do anything. But as you fight, the meter next to their portrait will continue to rise. As it gets higher, party members will begin assisting you in battle by popping in to help you out at the end of a combo, if you want to commit to the additional button press they’ll need. Once you max out their meter, you can perform a Kizuna Attack: a powered-up super where you and the party member will both attack the enemy, usually annihilating them entirely. The fantastic thing about this is that party members you’ve used previously in a battle will appear in subsequent Kizuna Attacks. This means that you can eventually have up to four additional people help you unleash ridiculously strong attacks against powerful bosses or capture areas. It’s a pretty satisfying little element that really makes it feel like your group is growing in power as battles progress. 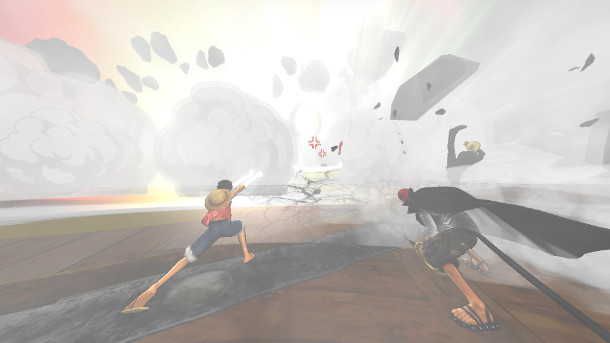 It’s safe to say that half the time you won’t even be able to tell what’s happening. But you’ll know those enemies are dead. And that’s all that really matters.

The game is spread out across several modes. The first one most will probably touch is Legend Log. It’s a retelling of the One Piece story starting from the beginning of the entire series and culminating with a retelling of the current Dressrosa Arc. You probably won’t be able to get a full grasp of the series just from this mode. Most of what you’ll see here is fanservice for the series faithful. Still, the scenes are enjoyable enough to watch, and the addition of a few areas absent from the first game sure made me a happy camper. There’s also the Legend Diary for every stage—special objectives that players can complete on these maps to earn coins for upgrading their characters. Some of these objectives are impossible to obtain on a single run, so it adds some replay value to the stages as players try to beat them with different characters. Luckily, the game is forgiving and players don’t need to achieve every objective in a single run. 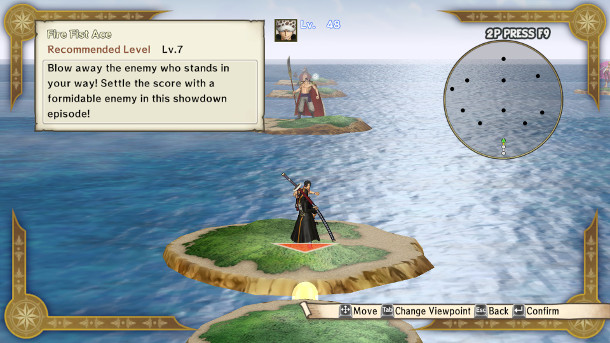 The second mode you have available to play is Dream Log. This mode simply entails defeating hordes of enemies using random allies on randomized maps. It’s a nice, quick mode for those that just want to jump right into the game without experiencing the story—though if you start from here, a lot of characters you would acquire from the Legend Log will still be locked. It’s best to play this mode afterward, since you do acquire even more characters from beating it. Once you complete the Dream Log, you unlock the final mode: Nightmare Log. Nightmare Log is essentially an insanely hard Dream Log. You’ll need to have some of your strongest characters available to beat it. It’s essentially just there for anyone who wants a challenge. A large number of players will most likely never touch this mode, but I’d recommend giving it a shot at least once. 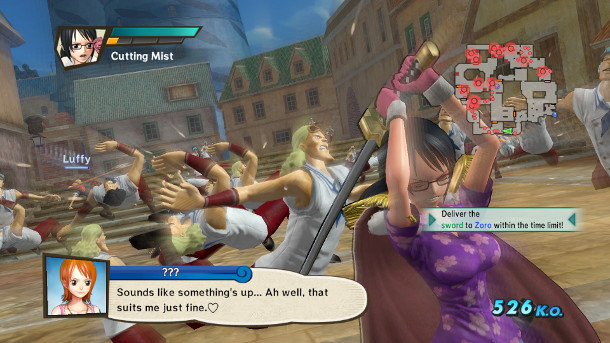 All in all, Pirate Warriors 3 is both a fine Warriors game and fine One Piece game. Players obviously won’t enjoy it as much as they could unless they are fans of both series, but the game has something to offer for both groups of players. Warriors fans will find some solid gameplay with interesting improvements. One Piece fans will find a game that does the series justice. Overall, it’s a title worth playing, even if there are better Warriors games out there.

Tom flew high over Hyrule, the entire expanse of the kingdom laid out before him. Were he inclined to look down, the sight would have taken his breath away, but he was only concerned with one area: th