You sit there broken and sobbing, watching the end as you’re taunted by the final boss. You tried your best; you didn’t want any of this. But this is the end of the story, and going back to the beginning may help. You’re a human child who has decided to investigate a mountain from which no one has ever returned from. While climbing a storm breaks out, and you seek shelter in a cave. You fall into a hole, and eventually you’re rescued by a kindly old woman with a caprine face. Fast-forward and you’re standing in front of her—”I won’t let you risk your life!” she cries, tears in her eyes. “You have to get through me if you want to leave the safety of these ruins!” Moments later, her body turning to ashes, you open the door and step out into the underground, ready to begin your… 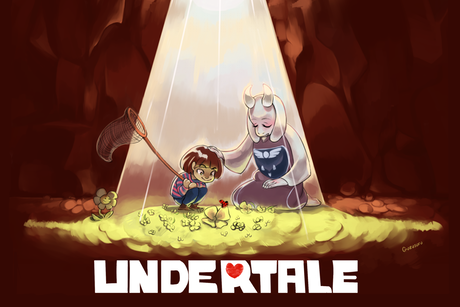 Somehow not as idyllic as the promo graphic suggests.

Undertale is a turn-based RPG made using GameMaker: Studio by Toby “Radiation” Fox and his team. It’s an RPG similar in style to classic jRPG Earthbound, borrowing elements from the Shin Megami Tensei series, and oddly the sense of humor in the interactive web media Homestuck. The game utilizes original graphics, music, and writing to tell a rather complex tale. The story starts off being about a child escaping the underground, but it turns into something so much more complicated. What’s most interesting is that the game adapts to choices made not only in the story, but in combat as well. It’s an interesting twist on the standard RPG genre. 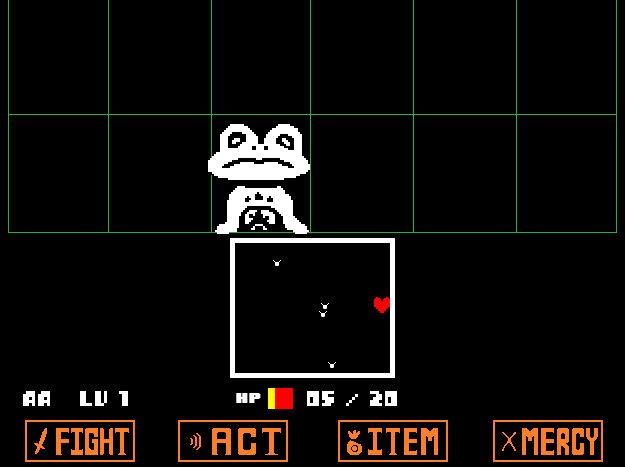 Dodging attacks isn’t up to the RNG!

Undertale plays like many RPGs before it: menu-based with very little to do outside of combat. However, things change drastically once you enter combat. You deal damage by lining up your attack on a slider, hitting the center for maximum damage. You avoid damage by moving a heart-shaped representation of your character around, avoiding projectiles that appear on screen, while collecting whatever power-ups enemies toss at you. Random encounters also eventually stop happening once you defeat enough of them. Most unusual though is the option to talk to, and spare through conversation, all enemies you encounter. You get no EXP and can’t raise your LOVE (that is, your level) this way, but it can be useful depending on the situation you’re in. Above all the rest, this is a unique presentation of RPG mechanics. 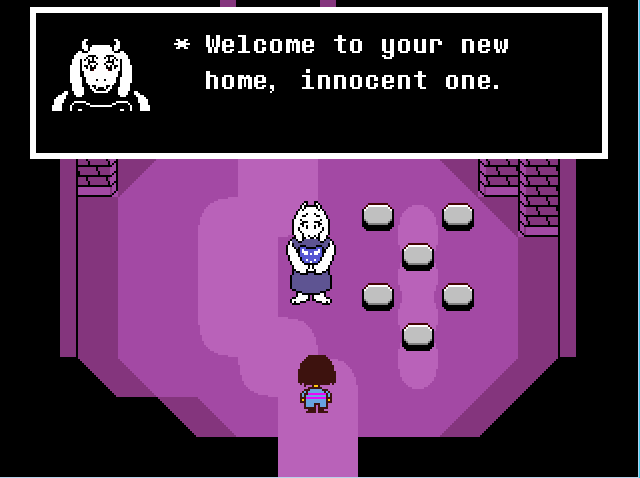 While not “artsy” the game is very artistic!

Undertale‘s story, music, and visuals show an interesting artistic vision. As you learn more about the underground, there’s this underlying air of hope and despair in the setting. The story itself is emotional; between making new friends or defeating hated foes, the game tugs at your heart and soul. The visuals are charming, quirky, and oddly expressive despite their simplicity. The music is catchy and uplifting, among a number of other emotions based on the situation. In all, Undertale is another indie game that provides an artful presentation to videogames. 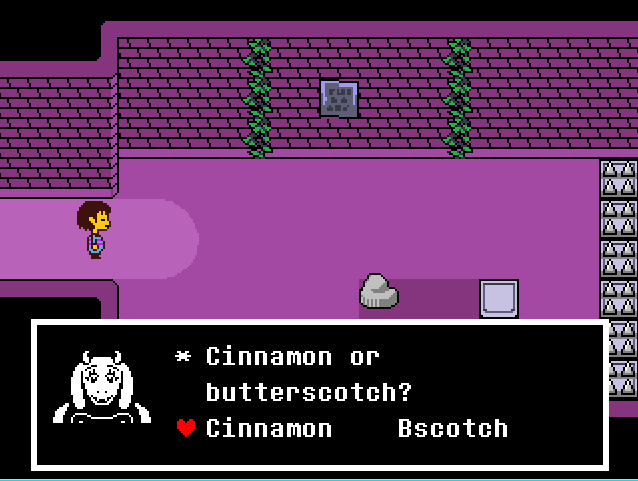 The game remembers even the most meaningless choices!

The story itself is quite a feature of the game, though! You play a child lost in an underground world inhabited by many monsters. Forced there after a war with humanity, the monsters dream of one day leaving the underground and returning to the surface. To do this, they need the soul of a human, and—oh, just their luck! As you progress through the story, you learn more and more about the society underground, meet more influential monsters, and maybe even make friends along the way! Throughout your journey, there are moments that tug at your heart, and the true story behind the events of the game is sad indeed. Undertale provides a moving, unique story that’s well told and worth multiple playthroughs. 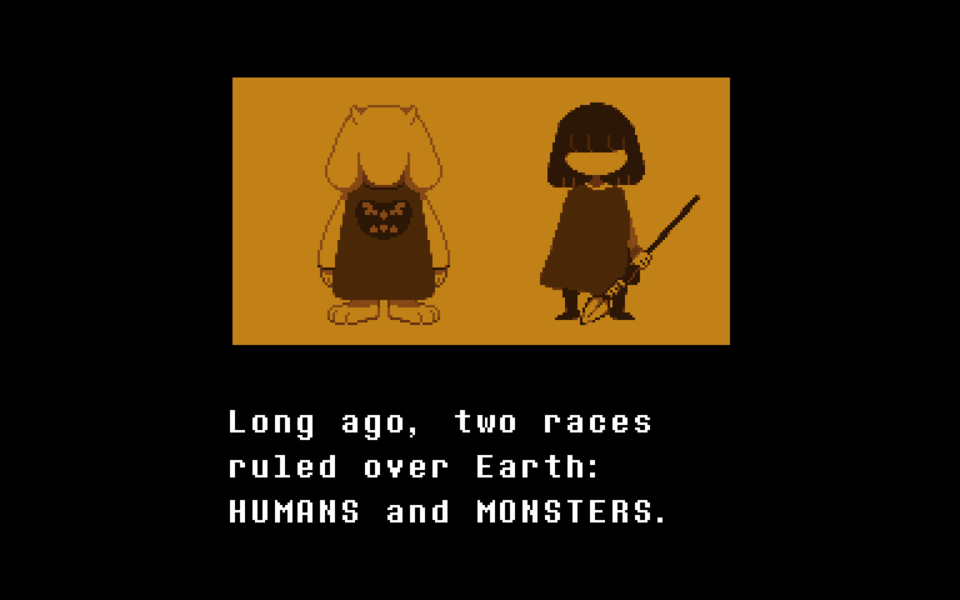 With a cast mostly of monsters, it makes sense the one human is so malleable.

Honestly, the game’s good on representation, too! The most noteworthy is that the main character is gender-neutral! Whether called “Child” or “Human”, the main character is presented and referred to entirely in a gender-neutral way. As well, they’re not given any particular racial identity. Almost entirely a blank slate, you’re able to project whatever identity you want onto them. There are also characters of other LGBT persuasions in the game, from a lady fish monster wanting to pick up other fish, to a lady dinosaur scientist with a crush on a mermaid, and a skeleton that might be aromantic! The lack of other human characters is a slight barrier, though—but given the story of the game, it does make sense. The representation this game provides is rather satisfying, even if slightly lacking due to most of it being applied to monsters. 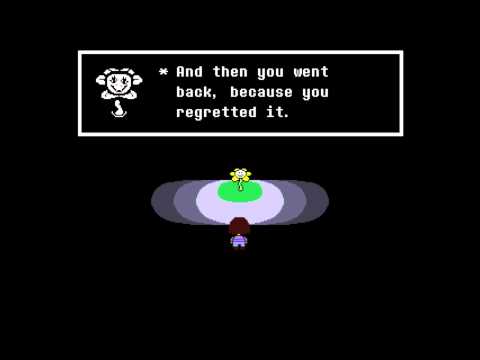 The game will shame you for not liking that pie!

There are some flaws, however, as no game can be made perfect. Undertale is rather obtuse at many points; puzzles can be difficult to solve at best, and some feel downright impossible. The game skirts emotional extremes far too frequently, with some moments feeling way too silly. However, those are a blessing compared to how you will be brought to emotional lowpoints through the story. At least one final boss is very surreal, and has been compared to actual hallucinations, potentially triggering of unreality. The game will even shame you for your actions at various points, whether in-game or merely saving and loading to try to get a better result, or even playing again after getting the best ending. It’s powerful and emotional, and while many see that as a good thing, it can also be very bad. 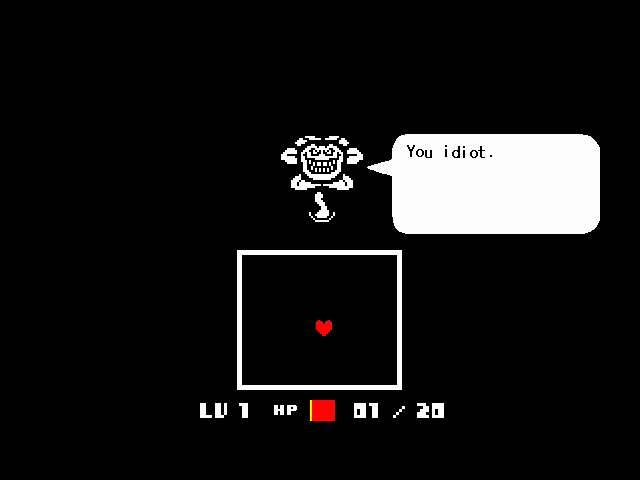 The most scathing words said to you.

Do I recommend Undertale? Honestly I do, as it’s a game I find difficulty in picking apart. Aside from issues with presentation and how certain endings play out, it’s really good! Another example of indie games achieving what AAA titles would be afraid to try. Play the game, and spend money on it! It’s truly a fantastic title! 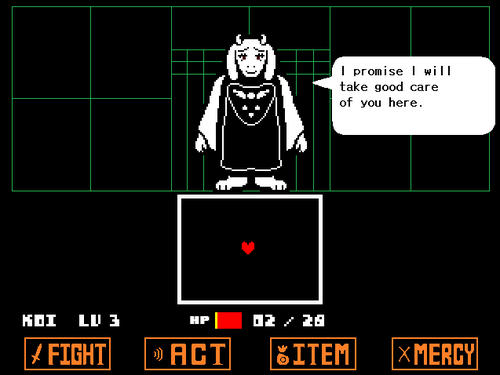 GameCola fan Julia tells a touching story of how the staff helped her through a tough time, whether they knew it or not.