I tend to write a lot. All in favour of a short review say aye. Aye.

Where Katamari Damacy greatly innovates, Me & My Katamari thoroughly improves. By its very nature, designed for the “bus journey home” or “math class” short bursts of gaming, the transition from console to portable evolves the game into something far greater than it was. And it was great to begin with.

Whilst Katamari was still an original concept (before the mobile, iPod and Xbox 360 games oversaturated the series), the games were delivered with quality in mind. Effort and play testing had obviously been done, and Namco had yet to deliver a truly awful gaming experience.

Me & My Katamari delivers a momentous quantity of gameplay. That’s all that can really be said—ported well to the handheld system with minimal errors.

Thanks to the casual nature of the trademark Katamari gameplay, the PSP edition stands tall as my favourite, despite Beautiful Katamari having the best online multiplayer ever made. 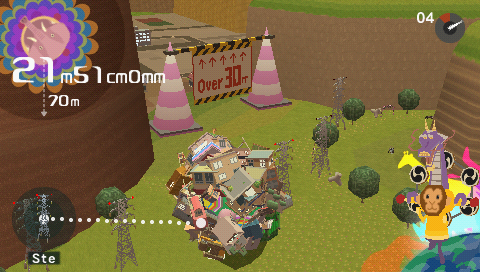 This portable edition still retains the same mistakes as its parents (the occasional slowdown and sucky collision), but it also retains all of the allure of its blood-tied relatives, for most of which the soundtrack is responsible.

This is very much the type of game you can spend upwards of one-hundred hours playing, because it is endlessly charming and appealing. The bright, colourful style of Katamari Damacy is transformed for the PlayStation Portable with barely a blemish or chefoo.

Because the graphics themselves were always simple and blocky, the game looks great on a system that produces simple and blocky graphics. The sharp jagged edges (that iPod games never have) are a gorgeous, lavish banquet for the retinas.

Great precision has been employed, as this port could not have been finer. The developers comfortably transported the controls in the only way possible to keep them faultless and undamaged; the two-hands-on-the-ball controls fit in well with the buttons on the left and right sides of the PSP.

Although baffling at first, the controls soon became comfy for me. Not a patch on playing with the Xbox 360 controller, but it’s horizons more comfortable than a Dual Shock controller, period. 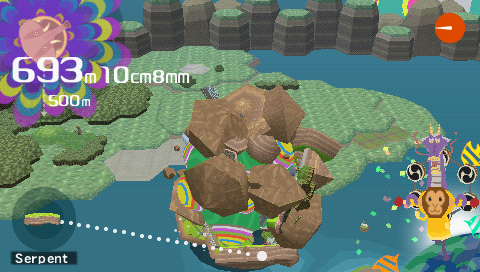 Prince and the cousins are fixing the King’s handiwork again—on this occasion, he’s managed to flood every island on the ocean, and destroyed the homes of countless animals. Countless animals? More like twenty or so, but it is a big enough disaster that it has to be put right.

Roll up stuff, and more stuff, over and over, which works for me with my slight obsessive compulsive disorder. There’s an immensely beautiful soundtrack to boot, so how much more could you want?

Ad-hoc multiplayer is included, although the modes are slightly lacking in matter. You can also share your “collection” with other players, which makes collecting 100% of the items much easier than its console counterparts.

Me & My Katamari is always sitting in my UMD drive whenever I can’t decide on a good game to play.

Where am I going with this? My twenty-video Me & My Katamari playlist, of course, where I play about half of the game! Remember, you’d be dumb to miss out. Check out my playlist, “Me & My Katamari,” to save some face.