Not long ago, I decided to pick up and play my GameCube copy of Metal Arms: Glitch in the System and I realized how my “taste” in videogames has changed in recent years. I remembered how much I used to like shooters, as well as how I liked to spend time playing online multiplayer matches—they both became kind of my field of expertise back when I set foot here in GameCola.

Even though I’ve felt at home writing for this site since then, there have been moments when I’ve felt a little bit out of place; mostly because I used to talk about some of the most popular shooting games in my previous column while the rest of the writers usually wrote about point-and-click adventure games, and…what’s that? A lawyer simulator?

Oh… But I was the one talking about “odd” games, wasn’t I? Former Editor-in-Chief Paul Franzen drove that feeling home on every chance he had.

This is a comment Paul left me while giving me input on an article I was working on some time ago. I’ve been saving it ever since.

Metal Arms is a game I feel obliged to talk about—it’s an amazing third-person shooter that didn’t receive the attention it deserved, so it pretty much faded into obscurity (and isn’t that this site’s main focus?).

Metal Arms’ plot and characters are pretty unlike other titles of its genre. Instead of a space marine or a hardened commando, in this game you take control of Glitch—a rather small funny-looking robot—who is recruited to fight against an ambitious and powerful Droid called General Corrosive and his army of evil Mil bots, who are responsible of bringing chaos to a once-prosperous Droid civilization in a faraway planet called Iron Star. 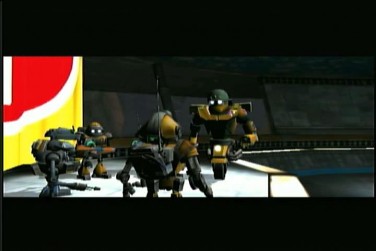 But the story is not the only thing that separates this game from the many, many other titles of this genre. To explain this, I’ll have to look back ten years ago:

Back in 2004, when I picked up Metal Arms—brand new from a bargain bin—I was pretty hooked on shooting games, especially to a certain title that came around 2001 called Halo: Combat Evolved; a game that pretty much set a new standard on first-person shooters (You do know Halo, right? Oh, come on! Do I have to explain everything?)

I’m mentioning that because every shooting game released after 2001 took some inspiration from what Halo did for shooting games on consoles. Back then I didn’t have an Xbox, I had a GameCube—the worst possible console to own for a first-person shooter aficionado. So, I was pretty much all over any game that tried to do something anywhere close to what Halo achieved on my Nintendo-Box. After so many years of playing shooting games, I can actually say that Metal Arms not only took inspiration on the new trend in shooting games that Halo started back in that generation, but it was one of the only ones that dared to do something different with that formula.

For starters, Metal Arms implements AI behavior magnificently. The game includes a wide collection of enemies who will react differently to your presence—some of them will engage you, others will run like idiots the moment they feel the pressure, and others have you going “Oh, God…stay away…stay the heck away from me!” until you’re nothing but scrap metal. 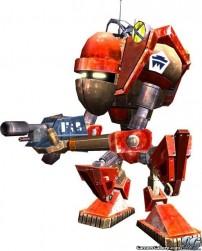 Enemy design 101: Make them look Nazis…German accent and all.

That leads me to talk about the game’s difficulty: it’s hard. I’ve never played it on easy difficulty, but “normal is hard” in a pretty satisfying way. There might be plenty of dying between you and the end of every mission, and that’s why I wouldn’t recommend the harder difficulty settings. I’ve tried them and they just settle on increasing the amount of damage you receive, and decreasing the damage the enemy units receive, so only completionists should be bothered to do them.

Other gameplay mechanics that this title took from Halo is the ability to fire the main weapon with one trigger and throw grenades with the other, as well as the addition of vehicles in some missions. On the other hand, this game didn’t adopt the regenerating health system introduced back in those days; it isn’t really good or bad, but it will make you approach your enemies in a different way, knowing that your vitality depends on limited health items scattered along the level, or dropped by defeated enemies, and you can’t just duck behind a wall and reengage after your health has recovered.

Now let’s talk about what set Metal Arms apart from the rest.

You’re not limited to carrying just two weapons. Glitch collects different weapons along the way and stores them in his backpack for later use. Actually, they’re not really weapons—they’re arms you can attach or detach from him depending the occasion.

Also, this game was created with progression in mind. You’ll be able to upgrade your character, weapons, and other items along the way. This offers a pleasant experience, since your combat effectiveness against the strongest enemies will develop as you go, and you’ll be able to face multiple and more varied enemy formations as you progress through the story.

The progression in this game also helps you to absorb the whole chunk of features this title has to offer, and the most unique one of them comes halfway through: The Control Tether. It gives you the chance of hijacking an unsuspecting (or immobilized) enemy and control it as you please. This not only gives you different “characters” to play with, but also a strategic (and hella fun!) option of fighting your enemies without placing yourself in danger. 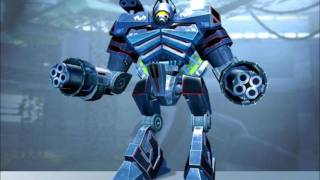 Imagine Robocop’s ED 209 with a Predator’s shoulder-mounted canon. That’s how it feels to hijack an enemy Titan.

Oh, and this game is long—over forty missions long—, and the level designs along the game encourage exploration, so you’ll be putting your jumping skills to good use since it’ll be required for you to jump over pits, or traverse on platforms in order to find items like ammo or upgrades you surely won’t want to leave behind.

Gameplay aside, the game’s animation shows a lot of dedication. Everything Glitch does is fully detailed; sometimes I can’t help but pay close attention to the way he walks, or reloads his weapons, or even the way his communications antenna sways around with every move he makes.

But the most notable aspects are the sheer amount of destruction the game offers. The most notable one is how the enemies’ limbs fall apart as they receive damage. That makes part of the strategy of the game, since dismembering enemy parts can drastically reduce the combat effectiveness of your adversaries. It never gets old to see an enemy still trying to hit you while its arm is dangling from its socket.

Humor was really taken into consideration while developing this game. It’s the kind of ironic humor that may not make you laugh, but will indeed make you smile and cheer you up as you advance through the game. That humor was also taken into the characters and enemies alike.

On the other hand, there’s not really much to say about Glitch (the game main character), and that’s probably because Metal Arms: Glitch in the System was supposed to be the first part of a planned trilogy that would explain the main character’s whereabouts and how the game’s conflict originated in the first place.

Jim Sterling has already done an excellent job at narrating the whole story behind Metal Arms’ creation, and how Vivendi (the game’s publisher) didn’t quite see the title’s potential until it was too late. Also, Vivendi held the game’s rights long enough that the company was swallowed by Activision, which doesn’t have any plans of making a sequel nor parting from the IP, so there’s no way of telling if there’ll ever be another release.

I’d be surprised if I found someone who had played this before. But I’m not surprised to see people still talking and supporting the idea of following up the story left behind (there’s a Facebook page appropriately called We Want Metal Arms 2).

I’m barely touching the surface over here—there’s plenty more I could say about this game, but I don’t think I’d ever stop talking about it if I continued. Underrated is pretty much how I’d describe Metal Arms. It dared to do so much to the tried-and-tested shooting genre, and it didn’t get the attention it deserved.

I would recommend this game…well, not only to shooting games junkies, but practically anyone willing to try something “new” and different. Ten years later, I’m having fun with Metal Arms once again, and that’s something not every game is capable of doing.