Little King’s Story is a Pikmin-esque minion management game where you, as Little King Corobo, build your kingdom and lead your people in conquest as you seek to take over the entire world. Standing in your path are puzzles, monsters, and seven other kings, all challenging you for the right to rule. Now, I could say something over-the-top about how Little King’s Story is the best game you won’t play this year, or that you should go out and buy it immediately, but I won’t (although those two things are completely true). What I will say is this: The development team behind LKS must have loved this project, and that love is clearly evident and makes the game a joy to play.

I was hesitant at first, because from the box and disc art LKS looks like another cutesy Wii game, and such games have a tendency to be terrible or great. My fears, however, were quickly put to rest as the game opened with a beautiful, hand-painted cinematic and a wonderful rendition of Ravel’s “Bolero”. Vangie, unfortunately for her, happened to be in the room with me at the time, and thus received the full force of my geekgasm as I proceeded to bounce up and down with glee at hearing one of my favorite pieces in a videogame. The game only got better from there, as I found all the cinematics to be done in the same rich style, with the normal gameplay graphics being lush and bright. This went well with the game’s child-like atmosphere, as the visuals perfectly capture the brightness and vivid colors of a child’s drawing. AND THE MUSIC! If you’ll excuse me, I believe I will be a bit over-the-top here. Ravel’s “Bolero” was only the beginning, as the entire game is filled with updated versions of classical pieces. Even if you are not a fan of classical music, many of the pieces will at least sound familiar to you and are guaranteed to put a smile on your face. Whether it’s battling your way through the Ripe Kingdom (lots of food there) to the tune of “La Donna é Mobile” or the fast and frantic battle with King Jumbo Champloon with a remixed can-can playing in the background, the music accentuates the whimsical and bright nature of the game wonderfully. Even if you don’t play the game, go check out the soundtrack; it’s worth it.

All right, Michael…take a deep breath…aaaaaaaaaaaand good. Sorry, just had to get all that stuff about LKS’s music out. Moving on, the game plays well, although the first couple of hours are a little dry. At first the game seems like a pretty cut-and-dry Pikmin clone: You have a few different types of citizens with different abilities, and you lead them around collecting stuff and beating up monsters. After this, however, the game expands greatly, opening up new areas and allowing you to grow your kingdom, level-up your character, and complete sidequests. There’s a lot of stuff to explore; however, I should mention that many of the sidequests are nearly-identical monster hunts. Still, LKS offers a more expansive world and opportunities for customizing yourself and your kingdom than many similar games (Overlord 2, I’m looking at you).

Some of the game mechanics can prove to be a little frustrating, though. Sometimes your army, especially when it grows above 15 people or so, has trouble following you, forcing you to go back and collect people who accidentally fall off ledges and cannot reach you. Also, selecting the proper unit involves cycling through every available class, a major pain if you’re trying to command your soldiers to attack a boss for the few seconds it is vulnerable. Overall, however, the game plays pretty smoothly, with combat and exploration being fairly easy to master, even if there are a few flaws. 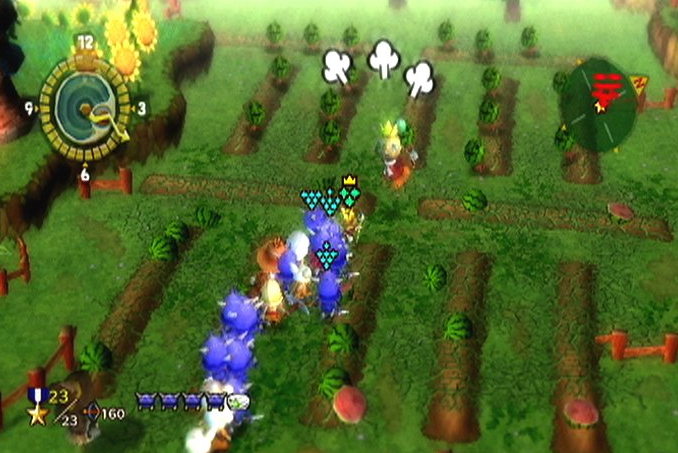 Oh, and did I mention this game is totally on crack? Because it’s totally on crack. Take the weirdness of Katamari Damacy, crank it up a notch, and you’ll have a good idea what you’re in for in LKS. It’s a wonderful weirdness, though: half child’s imagination and half fever dream. If you don’t believe me, just check this boss intro out. Yes, the guy with the TV head is the boss, and to beat him you must dig up the appropriate spot on a map of the world (the REAL world, not the in-game one) based on hints he gives you. It’s actually one of the more innovative boss battles I’ve encountered recently.

So to sum up, Little King’s Story is a game with a few technical flaws, but these flaws are more than made up for by the game’s breathtaking art, music, fun gameplay, and general quirkiness. In an era of big-name blockbuster games, it was really refreshing to see something new and unexpected come out and be so wonderful. As I mentioned before, it’s clear that the people behind LKS loved this game, and that’s something that will make you love it all the more.

Well, it’s officially happened. After two and a half years of dating, I have finally succeeded in finding a videogame that annoys my gamer boyfriend as much as he hath done unto me. Incredible, I kn ...