Fire Emblem: Fates is a perfect example of a great idea ruined by godawful execution.

Let’s start with the great idea: choice. The previous game in the series, Fire Emblem: Awakening had moments where you had to make a choice, but the storyline continued pretty much the same regardless. In Fates, however, your choices determine which side you end up joining, which in turn completely changes the story, the characters you can get, and—of course—the ending. This decision of whether to side with the country you were born in or the one that you grew up in, your biological family or your adoptive family, is made in Chapter 6. Or as soon as you purchase the game.

Choose your side based solely on the cover art!

One of the major questlines in The Elder Scrolls V: Skyrim is the Civil War quest, where you can side with the rebellious Stormcloaks to free Skyrim from the Empire, or with the Empire to stop the rebellious Stormcloaks from freeing Skyrim from the Empire. So you go to buy Skyrim and choose the Stormcloak edition, because ever since Star Wars, everyone wants to be a Rebel. However, when you go to join the Stormcloaks, it turns out that they are all horribly racist, so why would you join them? But too bad, you can’t join the other side because you bought the Stormcloak version! Or what about a game like Mass Effect, where the whole point of the game is that every choice you make has consequences. Now imagine if you had to buy a special version of the game for each choice you want to make. Want to save the council? Hope you bought the specific version of the game that allows you to make that choice!

This is not the only terrible decision Nintendo made with this game. Let’s talk about gameplay style for a while. Fire Emblem: Awakening introduced a gameplay style new to the series. Instead of automatically progressing from one level to the next, a world map allowed you to select levels, as well as redo levels with Risen enemies to grind EXP, gold, and relationship points. This was welcomed by some, but not by others. Because of this, there is an option to choose whether to use Awakening‘s playstyle or classic Fire Emblem‘s style. And, as with the faction choice, the option is between Birthright and Conquest. That’s right, if you liked Awakening‘s playstyle, you HAVE to ally with Hoshido, regardless of whether or not you like them. And this doesn’t apply only to the specific games. Even if you had both routes available, the Hoshido route will always be Awakening style, and the Nohr route will always be Classic style. This is, like the route issue, an abysmal idea. Think of every game that allows you to choose control style, difficulty, and other such options. Now imagine that this locks you into a route, and you have the gist of how bad this is. While it IS true that the options in Fates are more than just control/difficulty options, this is still a terrible decision.

Previously, I mentioned having both routes available. You can purchase both games at $40 each, but there are (slightly) easier ways. If you buy one game, you can download the other version at a discount for $20. The third way is to purchase the Super Special Awesome version for eighty dollars, which has both games as well as the third route: Revelation, where you don’t side with either country. This third route will also be available as DLC sometime after launch for $20. That means that in order to get the full Fire Emblem: Fates experience, you have to pay twice the normal amount for a 3DS game. 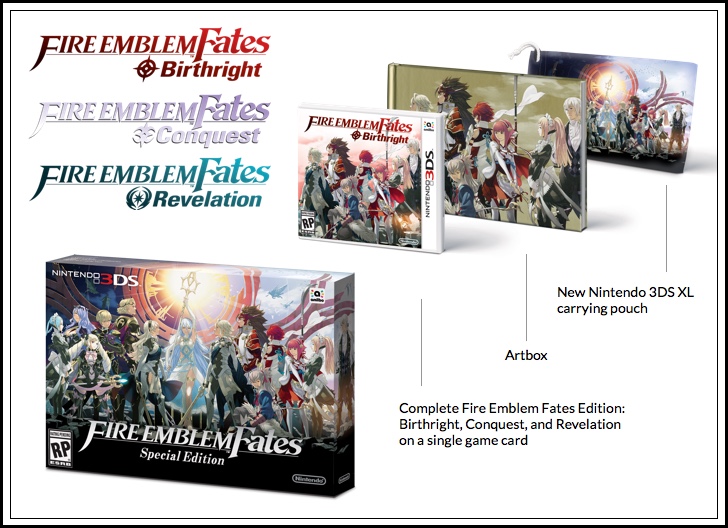 The full game on a single game card—just to emphasize that you paid too much.

Some may compare this to another Nintendo series: Pokémon. This isn’t a very fair comparison, as the Pokémon games are two slightly different versions of the same game. The only differences are usually which legendary Pokémon you get at the end, as well as a couple version-specific Pokémon. These differences are there for the sole purpose of forcing people to trade Pokémon with each other, which is the point of the series. This, on the other hand, is a single game split into THREE SEPARATE GAMES. While I forgive the Pokémon series for its multiple games; Fire Emblem: Fates is a whole different kettle of Magikarp.

As I said in the intro, Fire Emblem: Fates has some great ideas. In fact, if it was just one game, you might have got an article praising the game for the choices you can make. However, Nintendo managed to take a great idea and utterly ruin it with this multiple games crap. It’s not enough to have great ideas. You have to execute them right. Will I buy Fire Emblem: Fates? Probably. It looks good, and the ability to choose your side is awesome. However, the fact that I have to shell out twice as much as I would for a normal game is absolutely infuriating.

You know, I really like what they're doing with the new trailer for the Army of Darkness iPhone game. With most videogame trailers, the developers try very hard to make it look like a game's going to