Considered a spin-off to this well-known series, Sonic 3D Flickies’ Island (as it’s known in PAL territories) is not actually a three-dimensional game. Not in the way it’s played, nor in its content; I would hasten to call it a very one-dimensional game. Your goal is to once again put a spanner in the works of Dr. Eggman’s latest diabolical scheme. In the space between the previous sentence and the next, I will give you a short moment to guess what that scheme might entail. That’s right; you guessed correctly. As predictable as Princess Peach getting kidnapped, Dr. Eggman’s scheme involves utilizing the infinite power of the Chaos Emeralds to achieve his evil ambitions. Surely after Sonic gathered them the last time, he’d have gotten sick of this, and hidden the blasted things in a safe, or something?

The main focus of 3D Blast is on the Flickies. This is the official name for the critters that appear in the series, although specifically in this game, they are all birds. The name gracefully originates from what I consider to be a soul-crushingly boring game, Flicky. This is one of Sega’s old arcade games, where the main character of the game is a little bird, collecting chicks and launching flower pots at vicious cats. Please trust me: I may make the game sound interesting, but I can assure you that even playing Flicky for the fifteen minutes required to get the Achievement or Trophy in Sonic’s Ultimate Genesis Collection is longer than you will ever want to spend on this stupid, puerile filth. 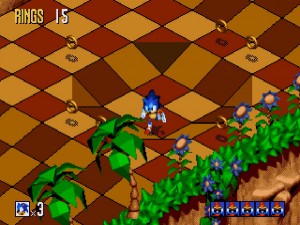 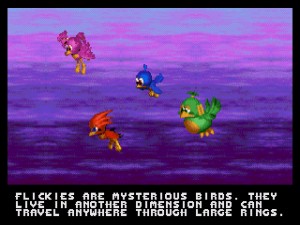 By the time Sonic comes to Flicky Island, all his “friends” have been turned into robots. I seriously don’t understand why a mad scientist with an IQ of 300+ relies on little woodland critters and birds to do his bidding, when he could instead just create some robot people who could actually do a decent job firing a gun. All these snakes, caterpillars, bees and fish just seem pointless. Is it to try to camouflage the fact that they are all robots?

The most troubling thing about this story is that Sonic travels to Flicky Island on a whim, to visit the Flickies. Had he decided instead to visit the Deep South and meet up with his cousins, The Frogs, he could have ended up damning the Flickies to eternal toil and bloodshed, while Dr. Eggman builds a powerful machine and wreaks havoc upon the world. I consider Sonic’s arrival at Flicky Island, at just the right time, to be a little too convenient. It isn’t like he has his own version of Spidey Sense. 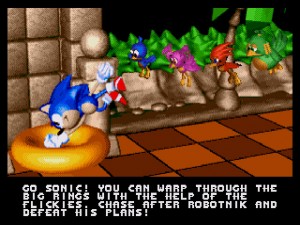 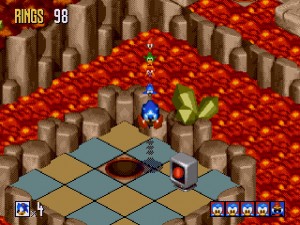 Now that I’ve had enough fun picking the storyline of this game apart into tiny pieces even your USB-powered vacuum cleaner could manage, it’s time to pick apart the gameplay. This is actually necessary, as the gameplay is where Sonic 3D Blast sees the most changes. In the (classic) Sonic the Hedgehog games, you’re required to help Sonic move from one end of the large-sized level to the other, whilst avoiding hazards and collecting golden rings. If you do considerably well, Sonic might travel to special stages in order to collect the brightly colored and not always green Chaos Emeralds.

You might notice, if you have played other games in the series, that Blast has much smaller levels. This could mean that the levels are more intricate. This could imply that more attention to item and object layout has been paid. However, this would be giving the game too much credit. Each level focuses around a checkpoint system, something that makes the game even slower. Each checkpoint requires that Sonic rescues the five Flickies trapped inside robots, which (in the plainest of English) means KILL ALL ENEMIES TO CONTINUE. 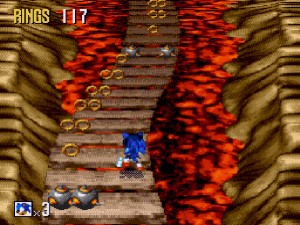 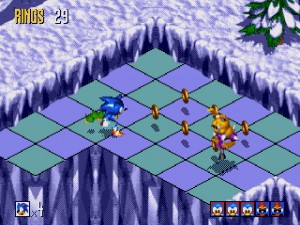 The more of those blasted poxy Flickies that Sonic attempts to rescue at once, the more bonus points you obtain. That’s the only incentive to carry around all five, besides the tricky-to-collect Sonic medals that can also be obtained whilst carrying the Flickies. If Sonic is hurt whilst he’s guiding them to the exit, then they scatter. You can imagine how annoying that can be if you get hurt whilst all five are following you, and there’s lava everywhere. Well, triple how you imagine that feels, because it will piss you off mega.

Unfortunately, the controls suffer as a result of the artsy-fartsy faux three-dee effects and the difficult camera perspective. Sonic slides around like a break-dancing ninja on a buttered floor. This results in making the game locations feel a lot more hazardous, resulting in you always being on the edge of your seat, and making dire judgements that mean the Flickies break free and run, forcing you to re-chase them down. This is just annoying. 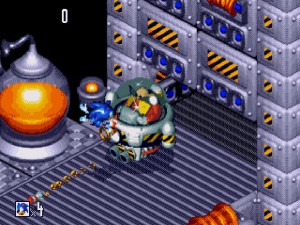 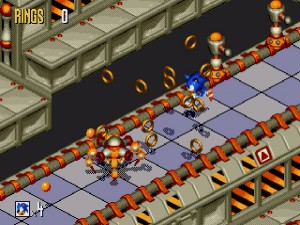 3D Blast is large, which is one of the great things it has going for it. There are seven completely different zones with their own aesthetics and style elements, containing two moderately sized levels each. After the two levels in each zone (which are both scored with a different music track based around the same melody), you then play a boss battle versus Dr. Eggman and one of his brilliant contraptions. If you have managed to collect all the Emeralds (which is easier on the Genesis version), you are given a chance to fight the Final Fight, where you systematically battle five bosses, twice.

Traveller’s Tales are on the record for having developed Sonic 3D Blast, but the game development was also supervised by Sonic Team, who started off by forming the level and gameplay designs. Two companies that have left great legacies, behind perhaps one of the games least enjoyed by fans. There are plenty of reasons to enjoy it, though, as the Genesis version has the best soundtrack, and the Sega Saturn version also boasts an excellently diverse and very different musical score. As far as the game goes, the later released Sega Saturn version of Sonic 3D Blast is a far superior game, and you can add an extra point to my overall score for that version of the game. 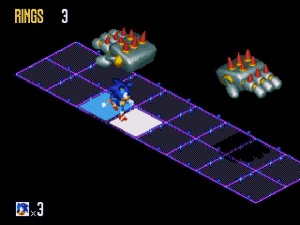 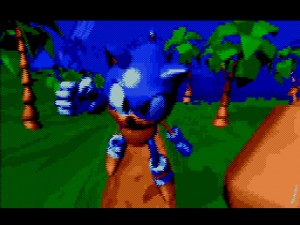 This is the first game in the series that requires you to kill a specific number of enemies to continue, something that has been used on occasion since and has been considered a horrid decision. This resulted in a title that broke from the fast-paced action that the series was known for. It is slow, sluggish and at times unplayable, teetering on terrible. Sonic 3D Blast never gets much attention from gamers, whether it deserves any or not. It’s plagued by issues, all ’round.

The most famous issue being that nudging the cartridge whilst the console is on will activate the Level Select screen.

GameCola search phrases provide further proof that the Internet was a terrible idea.