Sometimes, holidays come once every year…other times, they come all at once. In this case, November 16th was a momentous day for one year (with a bit of overflow into the next year)—never before, and never again. But, just because it only happened once doesn’t mean it should be forgotten! Let’s take some time to remember what November 16th once was to our fair Actual Internet Website.

We’ll start at the end, with “Captain Eric’s Psychic Thumb Feature Presentation”. This article is clearly an aftershock, an echo rumbling up after the initial explosion a year earlier. This blip on the historical seismograph even has a GameCola connection—Captain Eric predicts the release of Life in the Dorms, featuring the writing expertise of GameCola Editor Emeritus Paul Franzen!

Shenmue was a groundbreaking game when it was released. Was this announcement of a sequel what caused the November 16, 2010 historical anomaly? Considering it’s just a mobile game, probably not. There must be another cause…

It’s true—Donkey Kong Country Returns is terrifying. But, was it enough to have caused such a ruckus? Unlikely!

Aha! The marriage of Mike and Vangie. This is obviously the cause of the sudden spike in history! Two GameCola staff members coming together in marriage is like a nuclear bomb of nerdiness—a nerdclear bomb, if you will—going off in the fabric of time. It only makes sense that this momentous occasion was marked by a flurry of articles, all of the staff being inspired to celebration and throwing their posts like confetti on the internet. Let’s take a moment to remember this day in GameCola history and remember where we all were on November 16, 2010. I know where at least two GameCola staff members were! 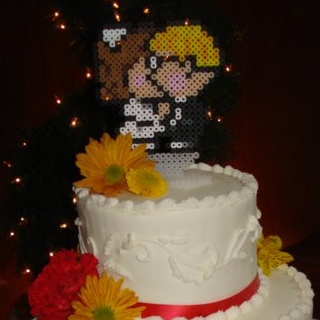