Alright friends, you knew this was coming. Time for the resident fangirl to break down the Ace Attorney anime and answer the only significant question you’ve been asking yourself this summer.

Should I be watching it?!

And let me tell you, the answer is a resounding “yes”…but with a grain of salt. 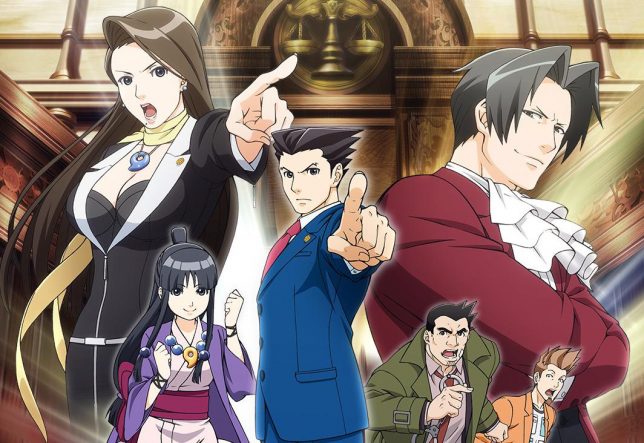 For those of you who are woefully behind on all things Ace Attorney, the anime began airing on April 2 and will run for 24 episodes. These episodes will cover the entirety of the first two games of the series. Right now, we’re at the break between games one and two, and given that we’re taking a week break (as of the time of this article), I figured it was time to share my thoughts.

Honestly, I have mixed feelings about the anime, and I predict that you will too. It depends on what you want—do you want a straight-up adaptation of the games, or do you want something completely new and fresh? I think the creators of the anime tried to split the difference. In some ways it works, but in some ways, it doesn’t.

I’m going to caution you, there will be spoilers ahead. Yeah, I know, we’ve all played the games; but if you don’t want to know how the anime changes things, you should probably leave now. This’ll still be here after you make yourself a bowl of popcorn and binge watch the anime. I’ll wait.

Alright, let’s start with the most important reason you should watch this anime. … I mean, what? The real reason you should actually watch the anime is…oh, who am I kidding, definitely Edgeworth. I mean, just look at him. He’s literal perfection. Don’t worry about the chains; that’s just some animators from the opening being silly and trying to make Phoenix/Edgeworth seem like a thing BUT IT ISN’T.

ANYWAY. In my opinion, the anime does a good job of staying true to the spirit of the games. Shoutout to Crunchyroll for including a special subtitle option with the names from the English version of the games and changing ramen to burgers—this is what we pay a premium for. A lot of people say it’s poorly animated, which may be slightly true, but it’s not really distracting. It has the kooky antics and the characters we all know and love. The voice acting is great, the music is on point, and even the little things (like the infamous blue speed-lines) are given a shoutout somewhere. The relationships between the characters are all as well-defined as they are in the games. I mean, look at these two.

Things were all well and good with the first few cases—only minor changes, like Wendy Oldbag (SIGH) telling Nick and Maya about the incident at Global Studios (from Case 3: Turnabout Samurai) in the middle of court instead of earlier. I was okay with that. I even kind of liked the changes that surprised me, the fangirl.

If you know me even a little, you know that Turnabout Goodbyes is my absolute favorite case out of all of the games. You. Do. Not. Mess. With. DL-6. That was my problem with the Ace Attorney movie, and I’m sorry to say, that is my problem with the Ace Attorney anime. They did it. They messed with Turnabout Goodbyes in probably the worst possible way. They didn’t resolve it. (Also THEY DIDN’T SAY THERE WAS AN EARTHQUAKE. IT’S NOT THAT HARD PEOPLE, COME ON. EARTH. QUAKE. IN. AN. ELEVATOR. WHAT IS SO HARD? … Sorry.)

So for any of you who’ve played the case, you know that, ultimately, Manfred von Karma is the one who sends Yanni Yogi the letter with the plan for the murder of Robert Hammond and for framing Edgeworth. In the game, Phoenix confronts von Karma about this in the evidence room at the precinct and ultimately gets hit with a taser, along with Maya, who manages to steal the bullet from Gregory Edgeworth’s heart [Editor’s Note: Not while it’s in his body], the critical piece of evidence. This is great because Maya was losing a lot of self-confidence and getting this important evidence was a boost to her character once she sees how important it really is. In the anime…well…it’s A LOT more convoluted. I’ll try and break it down, but I didn’t really even understand it myself.

So a day or two before the evidence room scene was supposed to happen, we see von Karma leaving with the DL-6 file (in the game, he takes this and the letter after tasing our heroes). At the time, I didn’t think anything of it, but on day three, when Phoenix HAS THE LETTER GOING INTO COURT, I realized we were missing something. I was kind of upset. I wanted to see how that scene played out. But I let it go (after some angry tweets) and kept watching. Then things got really weird.

MARVIN GROSSBERG shows up to testify in court about DL-6 and Phoenix shows the letter, saying this was all a setup. The boat shop dude confesses to being Yanni Yogi and to committing the murder and hooray, we win! … Well, at least until Edgeworth stands up and confesses to DL-6. Sit down, honey. Sit down.

But wait…isn’t something missing? Isn’t a critical component of this case just…not discussed?

Nowhere is it EVER mentioned that von Karma is the one who sent that letter to Yanni Yogi. NOWHERE. I’m actually extremely upset about that. It’s very important to the case and to DL-6 and they just…forgot about that part?

It did get better. Don’t get me wrong, I’m still angry. But…it got better. Mostly because of this. 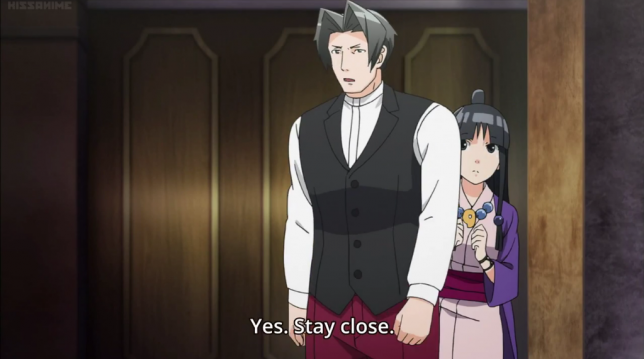 Alright, look, this is the only picture I could find and he looks really derpy, but EDGEWORTH WITH NO JACKET OR CRAVAT GOD BLESS. So what ends up happening is he fakes illness during the DL-6 portion of the trial to sneak Maya into the prosecutor’s office to steal evidence…because in the Ace Attorney universe, all offices have retina scanners. Look, I work for the District Attorney: this isn’t true. But hey, if I get to see Edgeworth without two articles of clothing…it’s all good. In there, Maya gets tased, but she does bring back the critical bullet that lets Nick win the case. So hooray, someone got tased and contradictions were resolved. Shame we’ll never find out who sent that letter…

Now you may be wondering, what happened to Edgeworth’s jacket and cravat? What possible reason could we have for seeing this beautiful beautiful body?

Well. Let me tell you.

Yes. They try and pass Larry off as Edgeworth. For like 0.5 seconds. It’s amazing.

And then we get this hot two seconds of him putting on his cravat. God bless.

So that case. I don’t know how to feel about it. I don’t feel like everything was resolved, but what can you do? Gotta move on, my friends.

And move on we did, to an episode set in the past and completely devoted to how Miles, Nick, and Larry became best friends. And can I just say, this was the quality content I wanted from my anime. I could write an entire article devoted to this episode and the character development and the adorable shenanigans with a puppy and then DL-6 AND IT ALL GOES WRONG AND WHY DEAR GOD WHY DID GREGORY EDGEWORTH AKA THE COOL DAD HAVE TO DIE? It was very distressing. But it was such a beautiful friendship and it made me happy and sad. Honestly, if you watch no other episode of the anime, watch this one. Because look at these dorks. 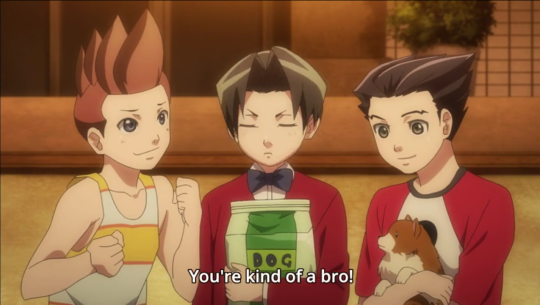 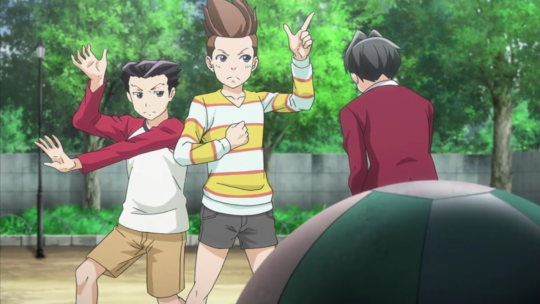 ALSO LOOK WHO IT IS. We’ll be seeing a lot of her very soon. 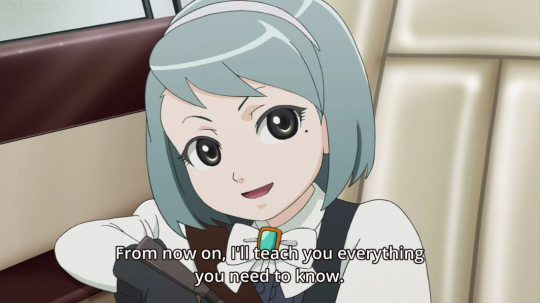 In the next episode, we go to Justice for All! The second case, so we’re going to see Maya in the defendant’s chair yet again. Plus side, great case and we see PEARL. Bad side, no Ema Skye…we’ll see how it goes.

To close this extremely professional rant-y article, have this video which literally made me laugh for an hour. You’re welcome. Fangirl out.

…and for those of you wondering, yes…this is in the game. UNEASE AND UNCERTAINTY. NOTHING ELSE. Alright. Fangirl out.

A game for which many of us have literally been waiting our entire lives.