I am going to try to be as unbiased as possible for this review, because I have been a Nancy Drew fan for a long time. Okay, deep breath…Pajama Sam, Full Throttle, every other PC game I’ve ever played, ever other videogame I’ve ever played. Okay, I can do this.

Nancy Drew: Sea of Darkness is a pretty momentous game—and I mean that for the company, for the fans, and as a really solid PC game in a world where the term “PC game” is changing. This game makes the Wii U games I’m playing lately look like sidewalk chalk drawings on the pavement in comparison. This is one of the best-looking games I have played in a while, and proves that PCs are still worthy gaming mediums. The fact that a concept as stodgy as “ship with hidden treasure in Iceland with a plethora of nautical references” is not only made intriguing, but very satisfying in the end, is something to applaud. 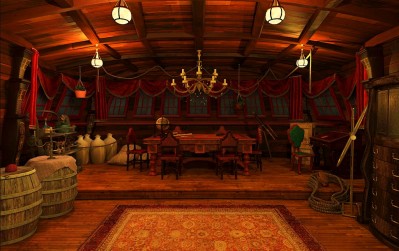 Gorgeous graphics for both interior and outdoor environments.

The plot is you, as Nancy Drew, are called to Iceland to investigate the disappearance of a sea captain who was at the helm of a historic ship that then crashed into the harbor. In honor of the annual town festival, your boss Dagny Silva, along with sea captain Magnus, spent years and tons of money restoring the Heerlijkheid, a ship with a mysterious past that the small town of Skipbrot has as a part of their identity. A part of the Heerlijkheid’s twisty past is the legend of the Dutch East India Company’s fortune stashed away somewhere on board, and hundreds of years have passed without a trace of it. The townspeople feel like the treasure, if found, should be held by the town, or to pass onto the last living heir that has claim to the ship, Elisabet Grimmursdotir. If this plot is already sounding thick, a very grumpy fisherman with a sad backstory is thrown in, as well as a picked upon archaeological researcher, and a whole knot of confusing feelings over the missing sea captain Magnus. But quite incredibly, the story is not only successful, it’s very well integrated with the location, puzzles, and even music. 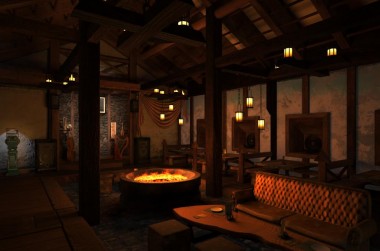 Lighting in a game this dark is very important.

The first thing you will notice is the astonishing improvement of graphics and effects. Not only is the fireplace in this game a delight to look at, there are flickers and waves of the aurora borealis in the skies, and on multiple screens! An effect like this going on in the sky is a first for a Nancy Drew game, and the progression doesn’t stop there. As you walk around the harbor and turn to look at the sea, icebergs move up and down with the tide and water laps up and down against pylons. While there’s a couple discrepancies where the water doesn’t move against objects, the major background objects in the harbor do, and that’s also really innovative for these games. And of course, it’s snowing throughout much of the game, and while it may seem a little hokey at times, absolutely adds a layer of three-dimensional depth that gives so much more to the game’s atmosphere. Finally, I have no idea how they could have progressed so much with their character models in the space of one game. The characters in the last Nancy Drew game were overall noteworthy, but did look a little rubbery at times. The movement and look of the characters in this game is leaps and bounds ahead; Dagny feels like an actual person with amazingly accurate lip-sync, Gunnar the fisherman looks like the real deal with one of the best computer animated sweaters I’ve seen, and you just want to hug Elisabet at times because she feels so real (and her backstory certainly helps). 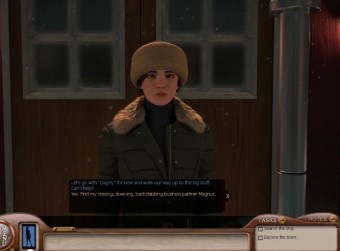 Considering some of the lofty and hard-to-broach topics the story tackles, from a town’s near disaster, xenophobia, to grief over lost loved ones, they are all covered in respectful and realistic ways. The culture of Iceland is celebrated in a way that’s easy to understand and even fun, although knowing some German (guilty) definitely helps for the Icelandic vocabulary challenge. I definitely have to give Her Interactive brownie points for using actual Icelandic letters in both the game’s environment and dialog text. As for the game’s location, the environment you interact with feels perfectly realistic as far as spacing goes. For some PC adventure games, it’s almost like the game takes place in a box or a corner where your world seems to be centered; but for Sea of Darkness, there’s a perfect sense of traveling from place to place while searching for clues and finishing puzzles. The soundtrack for this game also fits in excellently, and is even enjoyable to listen to outside of the game. 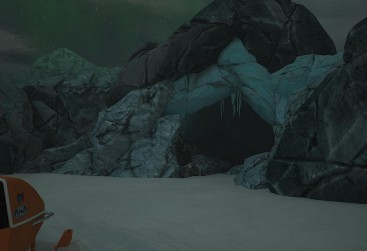 You got to love ice caves!

Ah yes, puzzles. Recently, the Nancy Drew games have introduced an in-game puzzle solution method, so you don’t have to exit the game to search for the answers online. Although the puzzles in this game are solvable with about three to twenty minutes worth of trial and thought, there are a few that just do not make sense, and the hints can be a life-saver, as well as the solutions if you’re really stuck. About two-thirds of the puzzles can be solved eventually if you think hard enough or sketch things out, but there are a couple to note that are unfair. At one point, you have to solve a puzzle that requires you to have one color of crystals two in a row, but they also must not interfere with crystals of the same two-colors in an adjacent column. Not only does the puzzle not make sense with the plot, the instructions and hints given to solve it are very poor. When I finally figured out what to do, I had actually almost solved the puzzle, and it looked like there were no areas that were wrong—and remembering my 7th grade math skills, there has to be more than one way to solve math and logic puzzles, right? The game wanted one specific answer to that puzzle, although my way also seemed plausible. This also goes for a triangle addition puzzle that happens earlier in the game, or maybe I’m just really terrible at math. On one more note, the puzzle you have to solve to open the right side of a box near the end of the game makes no sense, and offers hints that throw you off. You have to have six glass symbols in a row in a certain way, and there are indications in the box that seem like they would be hints, right? No, they have nothing to do with the puzzle and should be ignored; but then how do you figure out the solution? Maybe I didn’t pick up something in the game that would have given me the hint for this one, because every other puzzle in the game did have some hint or explanation. Save for those couple, the puzzles in this game fit in very well with the environment and further progress the story, which is impressive when you involve the town’s history, characters, and the immaculately detailed ship. 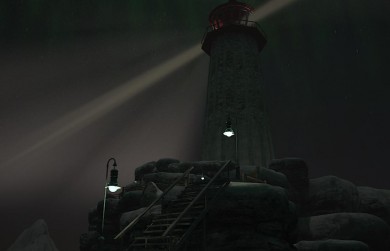 The lighthouse is one of the best locations to visit.

Nancy Drew: Sea of Darkness is a truly engrossing game, where you can get lost in the romance of snow, lost treasure, twisty relationships, and the Northern Lights dancing in the sky. Taking all the best from its predecessors, it sets the stage for exciting games to come. Even though it is bittersweet to think the next game will feature a new voice actress for Nancy Drew, I can only anticipate great things in Nancy’s next adventure. Until then, “I’ll miss the sky full of stars, but I’ve been in darkness for too long now. I can’t wait to see the sun again.”

P.S.—Yes, there is a Bjork reference.

A review copy of this game was provided by the publisher.

You remember that classic Flash animation BADGER BADGER BADGER? Apparently, that's a thing that you can own the rights to, and somebody does. And now that somebody is making a game about it and other