Hello! Yes, please come in. You’ve come at a good time. Just now, I’ve been tabulating the results—and I’ve determined the BEST games of 2017 as agreed upon by the GameCola Staff!

So please, take off your coat, come inside. There’s really no hurry. Take your time and enjoy the awards! 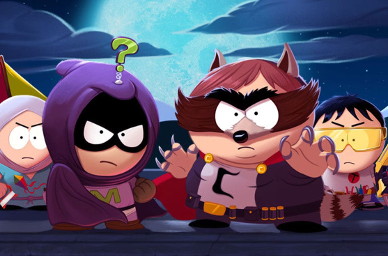 South Park: The Fractured but Whole

Brandon Tan: South Park: The Fractured but Whole continues the standard of quality set in stone by its predecessor, The Stick of Truth. Stylistically, it feels very similar to the previous game and different at the same time—the high fantasy environment is phased out for superheroes to enter the scene, and the staple RPG battles are changed to a grid-based tactical combat system. But even if it didn’t have any of that, what really won people over is that it truly feels like a South Park episode. The graphics look exactly the same as the style of the show, and the tone, writing, commentary, and humor are present as well. 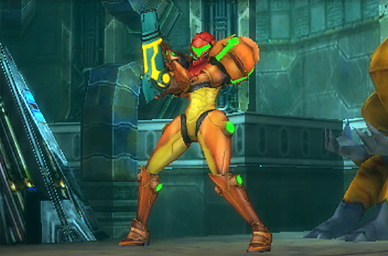 Daniel Castro: I have a weak spot for well-made remakes of classic titles, and in the case of Metroid: Samus Returns, it wasn’t only a good thing that they finally remade the game originally released on the Game Boy, it was actually necessary given that this was the second installment of the series, and until now it was basically lost to time.

While the original Metroid is an historical classic from the NES, the original Metroid II: Return of Samus—even though it used the best of the portable’s capabilities—had some issues translating the same magic onto the Game Boy due the limited screen size and color palette. Besides nostalgia, there wasn’t anything particularly relevant for going back to this game, but now we finally have the missing link from the original Metroid (also amazingly remade into Metroid: Zero Mission), and the marvelous Super Metroid.

But besides that, Nintendo and co-developer MercurySteam did a fantastic job at recreating this game, they introduced new ways to engage your enemies in fabulous 2.5D. Samus can now shoot in any angle, which allows you to shoot anything in your sight, and they even added a counter move which opens new ways to interact and punish enemies that dare to get close enough to you. This is the reason why I don’t particularly like HD re-releases, they can do better!

Best Use of Stereoscopic 3D 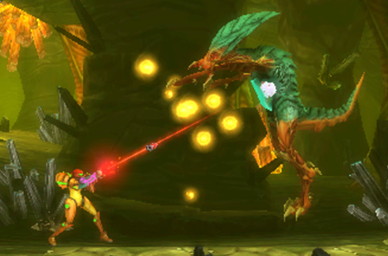 John Rizzi: Metroid: Samus Returns feels like a game that the 3DS was initially made for. For a 2D side-scroller, there is a remarkable amount of depth in the 3D presentation that make the claustrophobic pathways seem bigger, but still enclosed. The 3D effect is also complimented by the game’s beautiful color design. No two areas look the same, and cutscenes appear absolutely stunning as they take full advantage of the 3D effect with the seemingly handheld camera movements. Mae Borowski (Night in the Woods)

Robyn Tyrfing: Mae Borrowski starts off already as a character we can relate to. We first meet her in the bus station, forgotten by friends and family, left to find her own way home. Through the course of Night in the Woods we learn more about her, her fractured friendships, and the weirdness in her head. These qualities make her a character we relate to, they also make her GameCola’s Best New Character of 2017. She isn’t a badass super soldier, she’s not a hunter of powerful and exotic monsters, she’s not even a psychic detective or bombastic lawyer. Mae is a college dropout from a small town, her struggles are the very real struggles we have. Mental illness, fading friendships, the expectations of our family, a dying town, all of these are problems we face, they bring the character to life in ways that are not available to more extraordinary characters. In the case of Mae Borrowski, it’s the ways in which she is exactly the size of life that raises her above all the other characters of 2017. 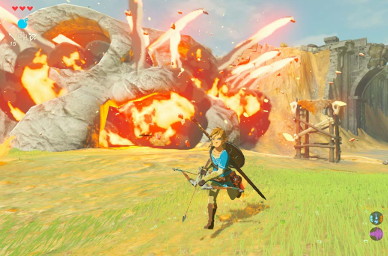 Joseph Martin: It’s easy to forget that just a few years ago Nintendo received only tacit praise at best. The company struggled to accommodate its passionate long-term fanbase and the fickle casual crowd. Their efforts often alienated both groups, with the former demanding a stylistic return to the ’80s and ’90s, while the latter insisted that modern game mechanics needed to replace the old ways. Many developers under similar pressure, including Nintendo during this time, tried to satiate each group individually. The Legend of Zelda: Breath of the Wild follows neither command—instead choosing to find a unique blend of new ideas and familiar themes from across the entire franchise that is so seamless and earnest it’s not always easy to tell which part is built from what ideological angle. And it would be one thing if this were just an unexpected streak of light in the night sky, but Breath of the Wild‘s philosophy has firmly pervaded Nintendo’s heavy-hitting franchises since its release, with games like Super Mario Odyssey and the upcoming Pokémon Let’s Go adopting the innovative blend of old and new. Breath of the Wild has changed the way Nintendo makes their games to let all its fans both have and eat their proverbial cakes. 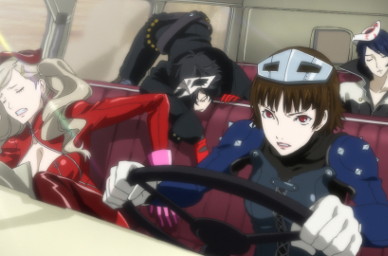 James Pelster: I could spend hours gushing about how much I love Persona 5, but for now let’s just focus on one of the main points: its story. As with most JRPGs, a detailed storyline is certainly expected, but Persona 5 resonates with me much stronger than other games I’ve played in recent memory. Without spoiling too much, at its core the focus of Persona 5‘s conflict is about a group of high schoolers rebelling against people who take advantage of those around them to fuel their own selfish desires. Though the game largely takes place in the mundane and ordinary setting of urban Japan, it eventually gives way to a much more fantastical endgame, allowing the writers to take that core motivation to unexpectedly extreme heights. But the main plot isn’t all that’s great about Persona 5‘s writing. Along the way, you meet countless other characters who you interact with and form bonds with, and by the end of the game you really start to understand their own personal ideals and goals (heck, even some of the villains are pitiable in their own right). Although it might not seem like it to someone unfamiliar with the series, forming bonds and relationships with other characters is a huge part of how you’re intended to spend your time. And the best part is, most of these optional character interactions provide the player with various advantages and/or buffs in combat, providing a great motivation for a newcomer who might otherwise consider skipping this important facet of the game.

Honorable Mention: Night in the Woods 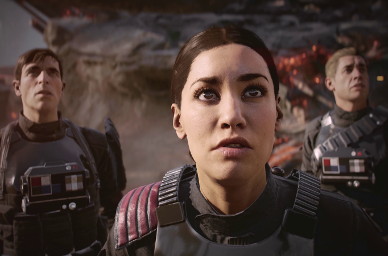 Daniel Castro: Let me be clear: Both the original Star Wars: Battlefront I & II for Xbox and PlayStation 2 are among my favorite games from two that era; you know Star Wars is all about the Force, the Lightsaber battles and all that, but for some of us, being into the boots of an Imperial Stormtrooper, or a Rebel soldier, or…an Imperial Snowtrooper was such an unexplored territory that this series provided to the fullest.

The third game of the series was trapped in development hell, and a whole game generation flew by without releasing a third game in the series. So when the new generation rolled in and I learned that we were going to get a new game in this series, this became my most anticipated game back when it was announced; the final product though, it was OK, it just lacked many things the originals did have (especially a campaign mode).

So when they announced this sequel I was all over it, there was no way this one could go wrong! “Just do everything you did in the previous one, just add the things you didn’t include the last time and we’ll be friends again!” I thought. The game even includes a campaign mode; a completely new story that fits into the Star Wars canon, so…how in the hell did they screw up this time?

Well, two words: loot boxes. EA just couldn’t resist watching how companies like Warner and Activision-Blizzard were just making their way into their playerbase’s wallets by selling them random virtual goods, so they jumped up into the same frenzy train, and not only that! They entangled their lootboxes with the game progression system, so you could get an edge on the game if you were willing to provide some green in exchange! All of this had some people wondering what else the gaming industry had prepared for us. 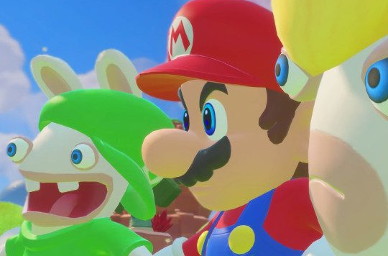 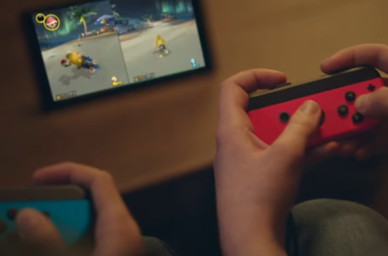 Paul Franzen: The Joy-Con is like if Nintendo took the Wii-mote, and decided to make it into a real videogame controller. The key thing here is diversity of play: you can play games using one Joy-Con; you can connect them both to a Joy-Grip to form a regular-ass controller; you can connect them to the Switch itself to make a weird giant portable system. Both controllers even come bundled with the Switch, so you get two-player local gaming right out of the box. You can connect them to your computers using something called “blue tooth”, which is basically magic. They also taste a lot less weird than the cartridges when you lick them, which is huge for those of us who lick our electronics.

You know something? I don’t think there’s any Joy-Cons here at all. There’s only Joy-Pros. Diana Gray: Ah, Splatoon. The family friendly shooter that continued its legacy onto the Switch with Splatoon 2. Splatoon 2 did a great job of keeping the mechanics that fans loved of the first game, while also adding new multiplayer features that, although sometimes frustrating, ultimately are useful. Salmon Run, which teams you up with other players to collect eggs for a questionable purpose, randomly assigns you one of whatever four weapons are currently being featured. It’s cool because it forces you out of your comfort zone to use weapons you’d never select otherwise (dear god, never give me a roller ever again). The shifting multiplayer modes on competitive play always provide a fun and unique challenge, and of course, the fun of Splatfests (where everyone teams up to have an argument over the most innocuous dilemma Nintendo could dream up) is legendary. I’m not going to claim multiplayer is perfect, but it’s clear that Nintendo learned from the original Splatoon and implemented new features into the second game to make it a fun multiplayer experience, easily deserving of this award.

Sorry, that’s it for today! Did you enjoy the awards? Did you agree or disagree? Be sure to leave a message in the guest book before you leave. And if you want to know the BIG winners—Game of the Year and all the rest—you’ll just have to come back tomorrow!

Forget New Leaf—this movie is the real reason Animal Crossing is so popular!