This is a game about a man named Stanley, who works in an office and performs an unsatisfying job. One day, everyone vanishes, and Stanley must explore his office to figure out where everyone went. Guided by an articulate and proper voice, Stanley explores his workplace seeking the answer. Or maybe he doesn’t, instead opting to stay in his cubicle until everyone comes out from hiding. Or instead he goes a step further and takes control of the story. Or, perhaps there’s another option entirely? Well, why don’t we figure all of this out in… 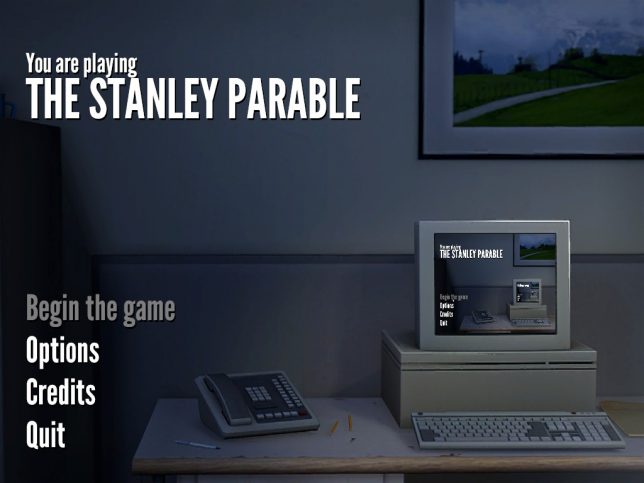 This is a story about a story.

The Stanley Parable is an exploration-based first-person videogame for the PC. Derived from a mod of Half-Life 2, the game went on to meet remarkable levels of indie gaming success. Using keyboard and mouse, you guide Stanley around his office seeking out story elements. The music is remarkably plain and the visuals are boring, though the story is rather interesting. Perhaps the game has not aged well, or maybe it never was really impressing, but The Stanley Parable does not seem to have held up to the praise I’ve heard attributed to it. 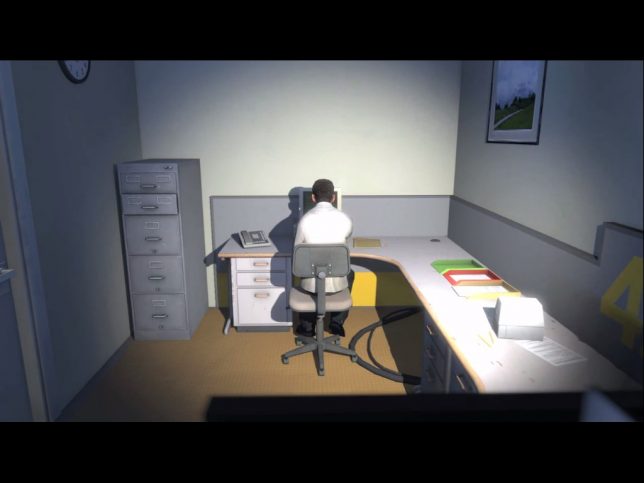 Controls are very simple, and not the core gameplay experience. Controlling Stanley is your standard PC mouse-and-WASD, with the additional of CTRL to crouch. It’s not very engaging at all, and all the instances that clicking and CTRL have an impact on the game can be counted on one hand. I suppose the winning content is in the story itself, however the actual playing of the game is not very satisfying.

Visuals are rather plain, too, appearing like bland stock objects one would find in a game engine’s demo pack. Not surprising considering The Stanley Parable was once a mod for Half-Life 2, but it certainly doesn’t make for an interesting environment. I understand the game is not about looking good, and indeed many games can be good without being beautiful. I just was hoping for a more interesting environment.

A handful of the many meaningful choices the game will make available to you.

The soundtrack is almost nonexistent. There’s a very generic theme to the tracks, and often the music is not noticeable. The most memorable sounds are the voice of the narrator, but then that gets grating as time goes by. Everything wears itself out, and even when you notice something new being said there was a chance you’ve already sped through it in impatience.

A leaderboard, minigames, and two full games await you in this release of The Stanley Parable.

The story is where The Stanley Parable shines, however unfortunately it is too thin to hold the whole experience up on its own. The stories range form terribly boring, to ridiculous, to mundane, to clever, to a punch in the emotional gut. Written as a storytelling exercise, The Stanley Parable succeeds in that respect. The many paths and options you are presented with in the game all have meaning, and no two branches will lead to the same ending. It’s just unfortunate that each path lacks weight to hold itself down, and the premise feels old after the first two or three playthroughs.

Humor is a big part of The Stanley Parable, but unfortunately it does get old after the first couple plays.

The Stanley Parable is lacking in representation. Of course it is, honestly, there are only two characters. Stanley is a white man, and the Narrator is a posh, British-accented omniscient and nigh-omnipotent entity. I suppose that does count for something, the technicality of which being that the narrator may be an all-powerful entity of which gender is not a concern. So that’s actually a point in the favor of the Stanley Parable in terms of representation, I suppose. 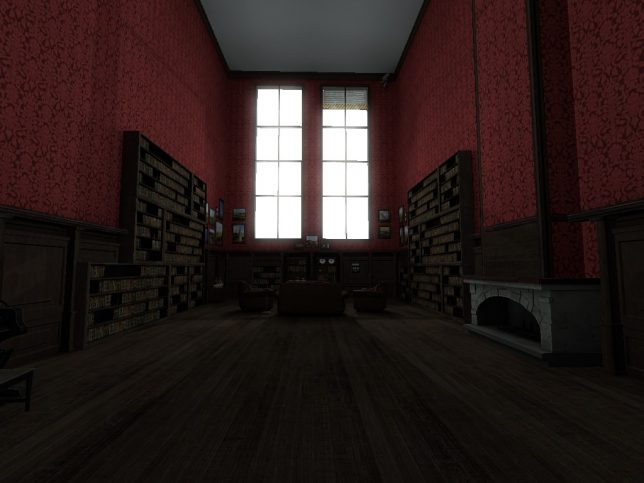 There’s even a boss room!

But, what’s good about the Stanley Parable? Not a whole lot, to be honest, and I think that’s just a sign of where it came from. As I’ve mentioned, The Stanley Parable was built originally as a mod of Half-Life 2, and was created to test an evolving narrative around a player. To this end I feel it succeeded, and it did a good job, as every choice the player makes feels like it changes the narrative in some way. In an era where the term “player choices” are thrown around by every major release, it’s funny to show that such a small and honestly mediocre game accomplishes meaningful choices better than what most major studios today have achieved. 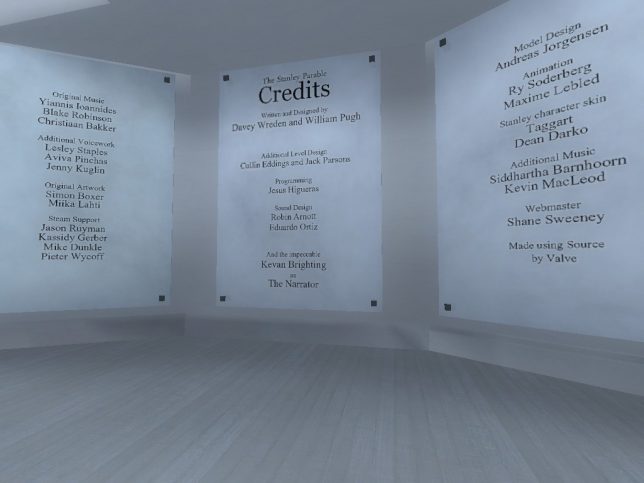 Meta humor does play a huge part in this game, though.

So, do I recommend the Stanley Parable? Despite having a lot of criticism for it, and a comparatively low rating, I do indeed recommend it. It’s a period piece, of sorts—an indie game developed as a mod that saw commercial success later on. Its saving grace is clever writing and promoting player agency, which mainstream videogames still struggle to even match. Give it a go if you don’t mind essentially playing a proof of concept. Let's you and me have a little chat about the retail industry. No, no, come on. It'll be fun.