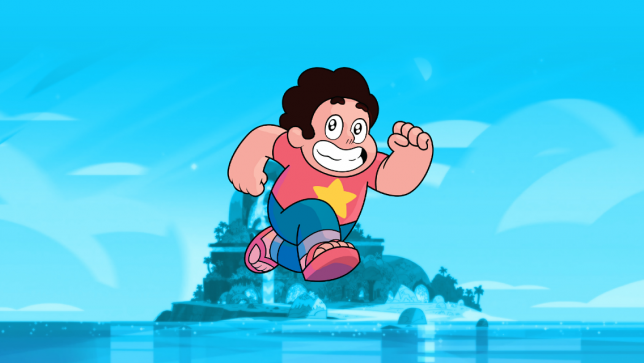 If you are familiar with the hit television series Steven Universe, you’re probably aware of its stellar soundtrack/sound design. Therefore, a game featuring the music of the show in the limelight should spark intrigue, especially after the fairly positive acclaim of the first official Steven Universe game: Attack the Light. Sadly, this free-to-play mobile game fails to live up to any reasonable standard and will leave you disappointed should you chose to venture into its short, stuttery syncopations.

Aside from its relation to the titular soundtrack, Soundtrack Attack’s other main selling point is its character creation ability, or “gemsona” creator if you want to delve into fandom terms. Unfortunately, this system is very limited, having only three body types to chose from with only minor cosmetic changes available from there. The story does do well at representing the kind of narrative that would feature a self-created character in a lead role in that it is very trite and bare bones, but being a mobile rhythm game means that having an engaging story is not something to worry about. There are a few text dialogue sections in between levels throughout the game, but it’s mostly either a brief reference to events in the show or a very bland “heroes vs. villain” exchange. 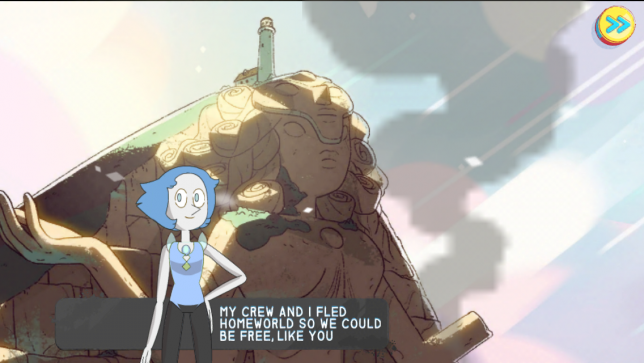 Speaking of levels, I should probably talk about the gameplay of this videogame, huh? It’s fairly simplistic, but that’s to be expected of a mobile rhythm game. Essentially, in each level a song plays and there are four types of button taps or presses that you perform in time to the music in order to score points, either tapping on the left or right side of the screen depending on which column the icon comes down. As you tap, hold, and swipe correctly, the points go toward building up your three-star meter. If you miss a note or tap at the wrong time, that meter goes down. At the end of the level, you get your one to three stars which are used to unlock the rest of the six worlds, each featuring seven levels. During the levels, there are also some notes that give you gem shards which you can use to purchase cosmetic items for your “Original Character Do Not Steal“. This is really very morbid if you think about it from an in-universe perspective, but I digress.

The sad truth about Soundtrack Attack is that it fails to deliver on its main appeal, nay, its namesake. Of the 42 levels in the game, only a little more than ten of them actually feature music from the soundtrack of the show. The rest of the levels feature very generic techno-pop-sounding instrumentals that don’t even incorporate elements of the show’s musical themes. While a few are passable enough, many are so bland and generic that they blend together, and there’s a selection of tracks whose instrumentation is downright grating to suffer through. Additionally, all of the songs that are from the show have been altered to fit stylistically with the rest of the music in the game. A couple of these remixes work, such as the We Are the Crystal Gems main theme as well as Strong in the Real Way, but most fall uncomfortably flat and some are even out of sync with the remixed pieces leading to a cacophonous mess that’s really hard to play through in a rhythm game. 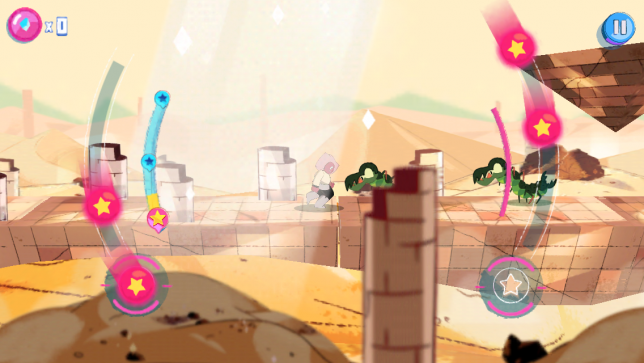 Or it would be hard to play were it not for the fact that the game is forgiving to a fault. Your taps are given a grade of “Perfect”, “Great”, or “Bad”. However, the game will give you a Great if you tap the side of the screen where a note is visible even if it’s nowhere near the correct position, making it very difficult to mess up in many situations. The counter to this, however, is that it’s incredibly easy to get off rhythm since you don’t really need to play correctly to get points. Rather, you will get slowly more and more off beat until you won’t know what notes those dots are supposed to be referring to. Additionally, since most of the songs are unique to this game, you won’t be familiar enough with the songs to be able to predict patterns, having to instead just try to focus on button presses even if they don’t really line up with the music.

The above issues are more of a frustration than anything, however. It is incredibly easy to progress in this game; it wasn’t until the second-to-last world that I began failing to get three stars on every level. Most of my failures came down to the fact that your star meter never fills past the three star mark, so if you are perfect but miss the very last note, you will only get two stars. Yet, if you are completely terrible but get the last few measures right, you can still often get top billing. It’s a very lopsided scoring system that’s simply unsatisfying. 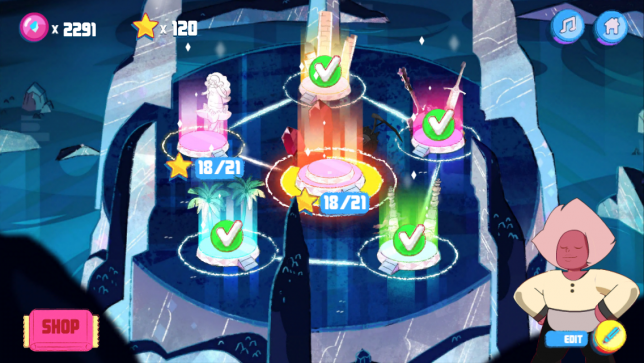 Soundtrack Attack does manage to dodge some of the pitfalls of free-to-play games. Getting the gem shards is easy enough in levels and rather than have you spend money to get more, you have the ability to watch ads to gain gems or increase your payout. This is a notable staple of Cartoon Network mobile games, and it’s a pleasantly unobtrusive one given that the currency is purely cosmetic. I was able to reach the end of the game without spending a single shard aside from the ones you are asked to in the tutorial.

Unfortunately, that’s pretty much where the positives stop. Along with what I’ve mentioned so far, the game has numerous minor issues to complement its major ones, such as glitches with the text display, framerate drops that ruin rhythm, and no incentive to deck out your created character as it is impossible to pay attention to their onscreen shenanigans. Even if your expectations for mobile games are low, you’ll still be disappointed with Soundtrack Attack and I suggest you instead either spend your time listening to the actual, wonderful soundtrack of the show or any good remixes.

ToeJam and Earl have always been thugs. They will always remain thugs. They are the epitome of living the thug lyfe. With that said, this update on VGiST comes, yet again, with more questions than ...