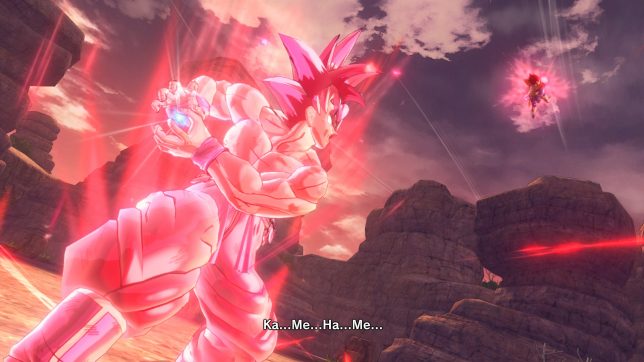 Dragon Ball has been going through a kind of Renaissance these days. We have the new Dragon Ball Super anime series (which is fantastic) the mobile game, Dragon Ball Z: Dokkan Battle (also good), as well as tons of new merchandise and promotions surrounding this iconic series. Today we’ll be looking at Dragon Ball Xenoverse 2, the sequel to 2015’s surprisingly good Dragon Ball Xenoverse. Fans can yet again insert their own character into the Dragon Ball universe, and it’s just as fun as ever! In fact, it’s better in some aspects. But only some. 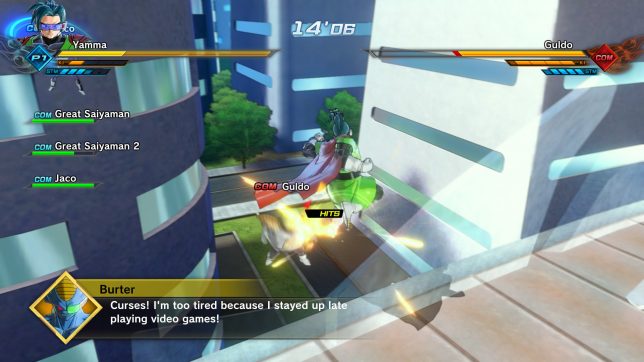 Let’s address the most important feature first, the reason fans of Dragon Ball flock to it in the first place, the combat. Combat is a noticeable improvement over the first game in the series. Controls are still simple, with one button mapped to light attacks, heavy attacks, energy blasts and jumping. You can still fly through the air with ease and fire off iconic Dragon Ball attacks like the Kamehameha or Final Flash. But no longer is the physical combat as boring as it was in the original Xenoverse.

Flying around and beating your opponent senseless is actually pretty exciting now, with a new bevy of combination attacks unique to every character. Instead of simply punching a guy until the game says you can’t punch them anymore, you’ll be flying around your opponent, knocking them from side to side and setting them up for some really interesting combination attacks. It actually makes sense to learn how each character moves now, instead of just holding out until you can utilize an ultimate attack. Combat feels fluid and each character really feels unique, and that makes a world of difference. And with over 80 characters to choose from (including created characters as well as more being offered via DLC), it’s easy to assume that there will be someone that everyone will take a liking to. 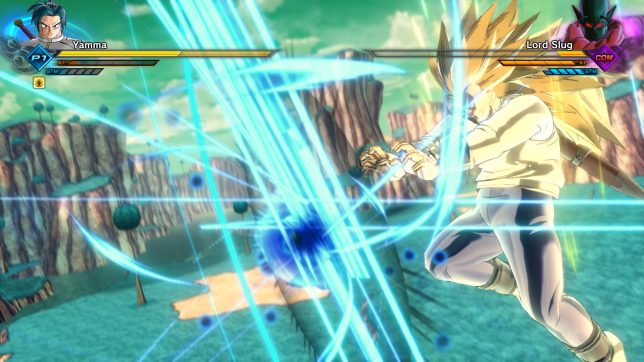 There’s a bevy of customization options available for the created characters. Each race—Saiyans, Namekians, Majins, Humans and Friezas (I’m not calling them Frost Demons)—has its own bevy of attacks for you to mess around with until you find one that suits your own particular playstyle. New to Xenoverse 2 are race-specific transformations, each offering a unique bonus and visual change to your character. Saiyans can finally reach Super Saiyan 3, Namekians can become giants, Majins can turn into Kid Buu (which is fairly lame), Humans can ride Goku’s Flying Nimbus, and Friezas can go Golden just like in the recent movie Resurrection F. There are several neutral transformations as well, such as the Kaioken returning from the last game as well as Unlock Potential, so if none of the race-specific ones interest you, there’s always another option.

In addition to these transformations, you can yet again customize your character’s stats focusing on punches, health, Ki, Ki blast attacks and physical attacks. Combine that with the hundreds of super moves, defensive moves and ultimate attacks available to you and it’s easy to create a Dragon Ball character all your own.

The techniques aren’t exactly balanced, though. I managed to obtain the skill Final Kamehameha very early on and didn’t need to use anything for the rest of the game, despite my character not specializing in Ki attacks at all. Some of the abilities are just that powerful. So despite the fact that there are tons of skills available, it’s likely players will just flock to the strongest abilities in order to finish the story and fight online. 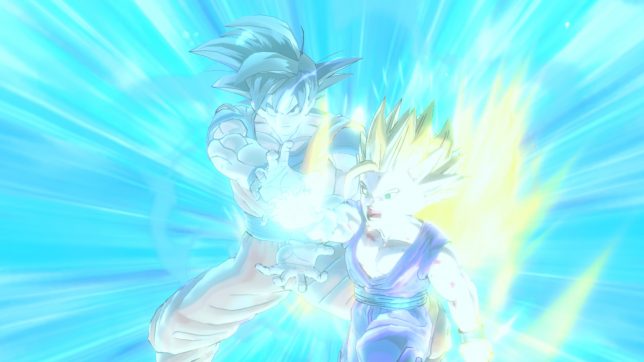 Still one of the greatest scenes in Dragon Ball history.

There’s not really much I can say about the story in this game. The reason I say that is because it’s pretty similar to the story from the first one. Yes, there are some new antagonists and allegedly stronger foes, but overall the story follows the exact same beat as before. You travel through the Dragon Ball universe correcting changes in history. More content was added to the game with the timeline going all the way to the end of Resurrection F, but even then the story presents the same problem.

Your character is continually overshadowed by Dragon Ball‘s iconic heroes. Cutscene incompetence is the trope here, with your character being utterly unstoppable with you controlling them but nearly useless the second the game takes that control away from you. It really makes you feel fairly inconsequential in the story segments, with Xenoverse-specific villains and the game’s Parallel Quests really being your only time to shine. 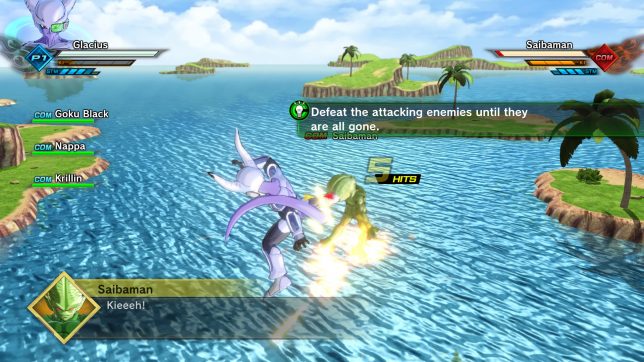 Those Parallel Quests were honestly my preferred content. You get plenty of opportunities to fight against iconic Dragon Ball villains in a bevy of hypothetical scenarios. You can also bring along whatever allies you wish to help you fight in these battles, so naturally I brought along the best Dragon Ball villain in years, Goku Black, every single time. These quests grant you new abilities and outfits as well so if you’re a fan of customization and playing dress up (and who isn’t?) then these quests are definitely something you’ll tackle. You can complete these quests cooperatively online as well, but I found it took me quite a while to get a team together so they were pretty much all tackled solo. 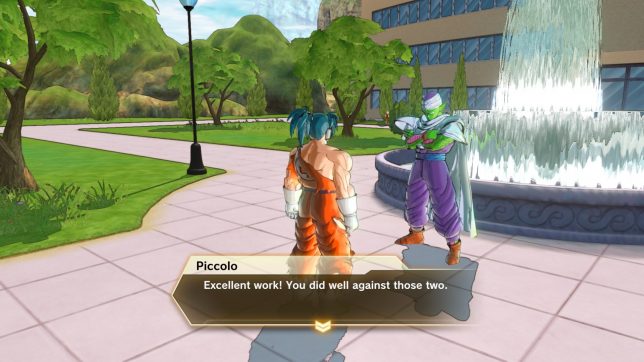 There’s a new hub for you to explore in between quests as well. Conton City is a massive expansion compared to Xenoverse’s Toki Toki City, and players even have the ability to fly as well. There are shops to purchase new abilities and outfits, a few quests to tackle, as well as the most important thing in the city: mentors. Yet again you can get an iconic Dragon Ball character to tutor you and teach you basic attacks. There are returning characters from the previous game like Piccolo and Vegeta, as well as tons of new characters such as Turles and Lord Slug. These mentors can even show up in Parallel Quests to help you out as well as give a boost to whatever attacks you’ve learned from them, so having one as your master is always worth your time.

Some of them seem quite excessive, though. I’m not sure any player would really want Raditz as a mentor over Master Roshi. 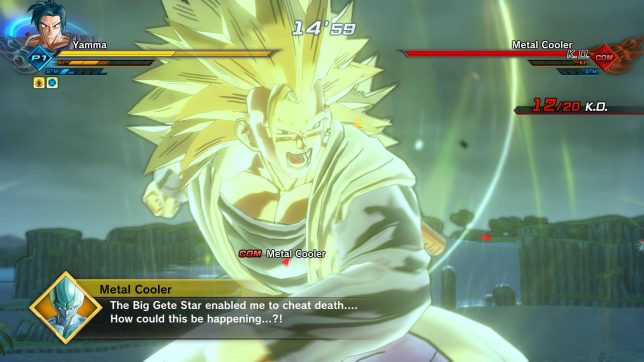 All in all, Dragon Ball Xenoverse 2 is a fairly solid fighting game. Fans of the series will downright love it, with new characters and attacks sating their desire for more Dragon Ball content. Newcomers will find a decent fighter to take up a bit of their time but the game is obviously designed with the Dragon Ball fan in mind. It’s a game that will provide quite a bit of fun, but as far as replayability goes that really depends on how much of a Dragon Ball fan you are. Now if you’ll excuse me, I’ll be here patiently waiting until they finally add Super Saiyan Rose Goku Black.