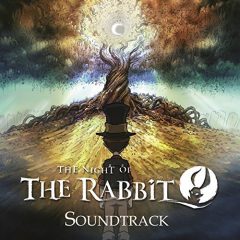 On a day in summer vacation, anything is possible!

This is a quote from The Night of the Rabbit, a game that is filled with so much beauty and wonder, I can hardly keep my love for it contained. The art and the story are amazing, and what I believe pulls it all together is the soundtrack.

The opening song starts with the opening narration. The beginning is ominous, just like the rest of the opening. It doesn’t take long for it to transform into something more lively and upbeat. It’s a perfect way to introduce the tone of the game-full of adventure and storybook-type awesomeness, but with ominous, slightly darker parts as well.

You might recognize this as the song I used for my flag video from last summer.

These songs are almost impossible not to hum or tap along to. They’re just so cheerful and reminiscent of walking around the woods as a kid.

Most of your time in-game has you in and around Mousewood, a tiny town filled with mice, squirrels, and other woodland creatures. There are different tracks for both day and night in town, near the field, and in the surrounding woods.

There are several different places you travel to in this game-the land of green, the land of foxes, and the land of ice. They’re based off of Ireland, Japan, and Antarctica respectively.

Sound familiar? I would hope so, since they’re all reprises of the opening theme. Personally, I love how it ties the different places back to the opening. Part of the game actually I do think it would have been awesome for each land to have their own unique song, but the way the main theme was composed for each respective location was beautiful.

The end of the game is where things get more…”action packed”. I believe this is the song that plays during the final puzzle/battle. It makes it feel more intense and while the puzzle can be a little slow-at least to me-the music kept it feeling tense. The extended version is really cool.

I’m going to end with this song, since I don’t really know how else to talk about the music in this game without devolving into a transcription of the random glee noises I make while listening to this soundtrack. I’ll leave you with my favorite song in the game, and a playlist of the soundtrack. In my experience, Daedalic’s games have great soundtracks, and this is probably my favorite. It’s beautiful, and captures so much of what the artwork and story already give-a sense of that last summertime adventure.

Whoa! This was a busy podcast. Not only did we have EIGHT—count 'em—EIGHT podcasters, but also a whole bunch of listener submissions! Madness! In the middle of our street. Anyway. On this podcast,