For those of you who may not know, I’m currently a third-year psychology major (and sociology major, but for this article, that’s not relevant). This semester, I’m taking a class called Cognitive Psychology. It’s basically a course about how our brain works – structure of memory, language processing, problem solving, things like that. My professor really likes to find interesting videos to put in his (admittedly kind of dry) notes to keep the class engaged, and the one he showed us today was actually pretty cool. I wanted to share it with all of you and talk a bit about the science behind it.

The creator (SethBling) does a very good job of explaining the mechanics but I’ll add my two cents. This is a computer learning very slowly how to play Super Mario World, starting from absolutely nothing to the pretty decent gameplay you see in this video. The process is called “neuroevolution.” At 0:46, the structure of MarI/O’s ‘brain’ is shown as it completes the level. This network of neurons (represented by the lines and squares connecting the buttons with what MarI/O sees) that MarI/O uses to make decisions about which buttons to press developed from nothing in 24 hours. As you can see, MarI/O developed from many different generations and species and variations in generations and species formed as the program got over ‘ruts’ in its gameplay and improved. In effect, this is an intensely sped up version of what happens in human development, shown by playing a videogame. I think that’s pretty cool. 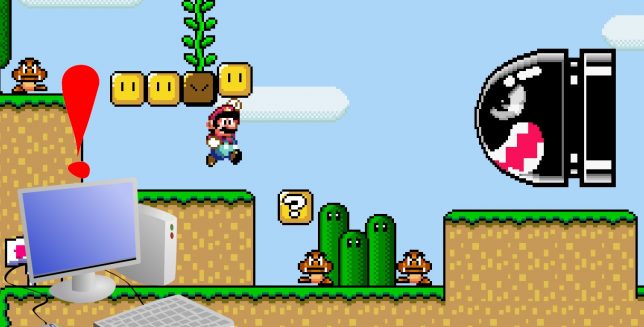 My artistic representation of what the learning process looks like.

Examples with computers like these could be (and are) extremely beneficial to psychological research, especially in areas of evolutionary psychology. Sometimes researchers just don’t have the time to wait around for a mutation to appear in the human genome, so being able to manipulate a computer like this one to study evolutions in neural networks is valuable to cognitive psychology. Having a computer learn by playing videogames may be an unorthodox approach, but they don’t call it a learning curve for nothing.

A week later, we get to see a little more of MarI/O’s development in a different level and two completely different games. The neural network built through tons of trial and error actually discovered and exploited a glitch in Super Mario 1-2! So this raises a question… with enough learning, will computers be able to completely surpass human gamers in our favorite classic games? Only time will tell.

A murder mystery in the Jewish part of New York.