If you know anything about me, you know that I’m a dating sim fanatic. I get obsessed; I’ll readily admit that. But no dating sim has ever captured me like Mystic Messenger (or MyMess, as I affectionately call it), and honestly, I don’t think any other ever will.

From the developer of Dandelion comes the next heartbreaking story that will ruin your entire life—Mystic Messenger, a story that actually stars you even more than any other dating sim! Thrown into a random chatroom with five romance options, real-time chats, and one huge mystery, the hits just keep on coming. Through your time as the newest member of the R.F.A. (Rika’s Fundraising Association, more on that later), you take charge of planning the next fundraising party—inviting guests and generally keeping the other members calm as they go through their drama. You’re basically taking the place of Rika, the last party coordinator, who committed suicide before you joined the chatroom under mysterious circumstances. Her boyfriend, V (another member of the R.F.A.), is rarely around, but supports the idea that, with your help, the R.F.A. should host another party. Between party planning and chatting up the baes, you barely have enough time to try to solve the mystery of the unknown person who dragged you into this situation in the first place, but darn it all if you won’t try. 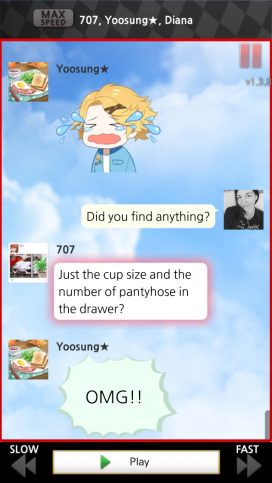 The results of the background check they tried to conduct on me. Wouldn’t they like to know…

The chatrooms happen in real time, so for a while, waking up at 6 AM to talk with my boys (and Jaehee, my soul sister) was a daily occurrence for me. The game lasts 11 days total—in real time—with the final day being one chat followed by the party, when the members “actually meet” you for the first time. Chatrooms open at specific times and stay open until the next chatroom opens. If you do happen to miss one, you can buy it with hourglasses you earn by answering certain ways when participating in chats. The members also text you regularly…sometimes too regularly. 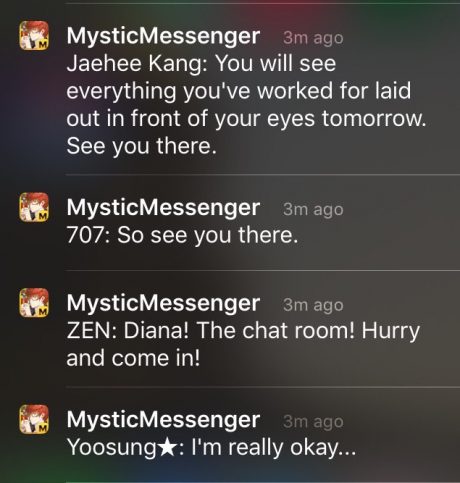 AND THE PHONE CALLS! Sometimes they call you, which is always fun, especially if you’re in a room full of people and they wonder why you’re blushing looking at your phone with your headphones in. It’s awkward.

In the chatrooms, you interact with your fellow members by choosing options to respond to their (often hilarious) conversations. Usually it’s pretty obvious who a comment will appeal to, but sometimes it’s a little more difficult. The first four days of the game are common, giving you ample time to gain hearts (answer comments “correctly”) to achieve your chosen lover. There are two main routes: common (Yoosung, Zen, and Jaehee) and deep (Jumin and 707). On the deep route, you get more information about the overarching story and pursue the more difficult bachelors. Regardless of route, the story splits off after the fourth day, with a different path for each character. Let’s get the lowdown on each of them, and I’ll include a few chat snippets that I enjoy. (For clarification’s sake, Diana is me and Eun-ji is one of my friends who shared the ride with me. We were constantly sending screenshots back and forth.) 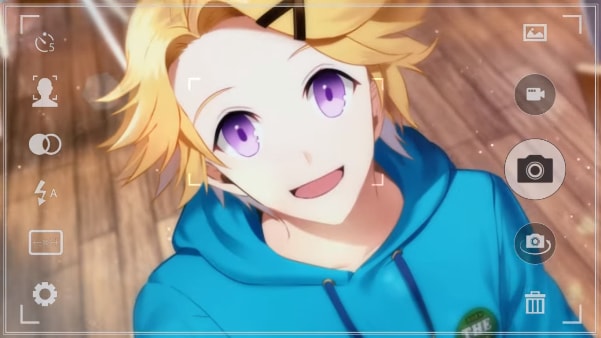 Yoosung is a cute college student who is absolutely obsessed with LOLOL, an MMORPG. He’s the youngest member of the R.F.A. and was Rika’s cousin. He tends to be suspicious of the lack of information the other members received about Rika’s death and often (to my annoyance) associates the main character very closely with Rika. In the chatrooms, he’s bubbly and very gullible, falling for the other members’ jokes. After he gets over the whole comparing-you-to-Rika thing, he’s actually very sweet and caring, but the first part of his pathway turned me off to him. But maybe you’ll think differently—he’s an adorable nerd! 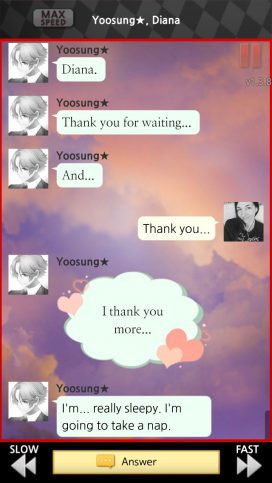 I don’t even remember the context of that, honestly. He’s a dork. 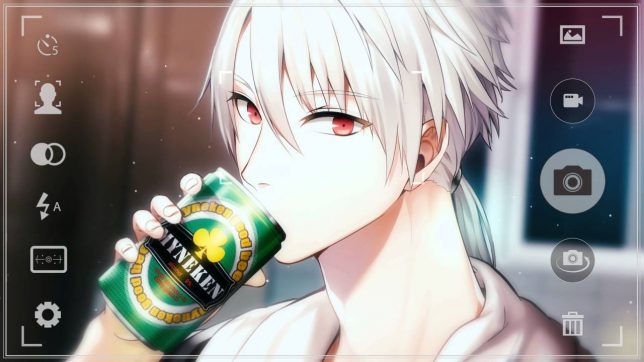 He’s a looker, ain’t he? Very much on the narcissistic side, Zen is an actor and model. His options are honestly a little sickening to me (in my opinion, the main character falls a little toooo hard for this guy at the price of her dignity), but I will say that he’s very charismatic and dedicated to his job, all while suffering from a crippling cat allergy. If you like to see lots of selfies of Zen, by all means go for his route! He’s very protective, loves his beer, and his route is very dramatic. Are you in the mood to prevent other ladies from getting at this Adonis? Go for Zen! 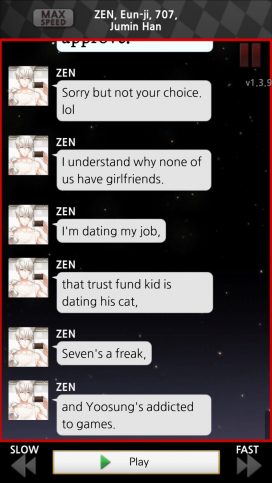 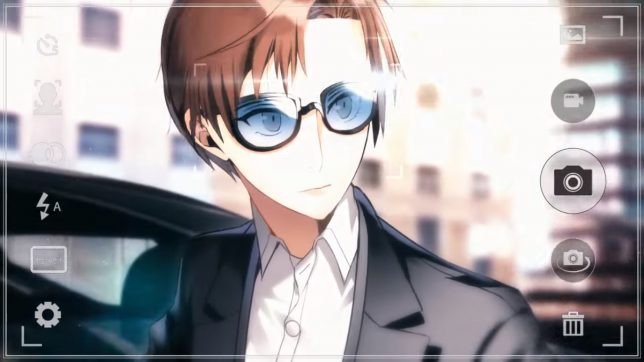 The only girl in the R.F.A. (before me, anyway), Jaehee is Jumin’s assistant and is so overworked it makes me cry. She’s literally the sweetest person on earth and harbors a not-so-small fangirl crush on Zen, which is adorable. Although her routes in the DLC are more romantically-oriented, in the main route, you just end up as friends, which suited me just fine. Encouraging Jaehee to go after her dreams is a very fulfilling playthrough, I definitely recommend this route. And she’s always very fun to talk to. 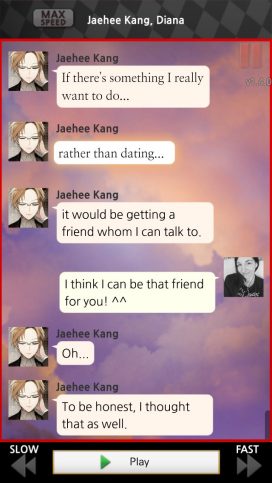 GOD I LOVE HER SO MUCH. GIVE HER ALL THE LOVE AND SUPPORT. SHE IS AN ANGEL. 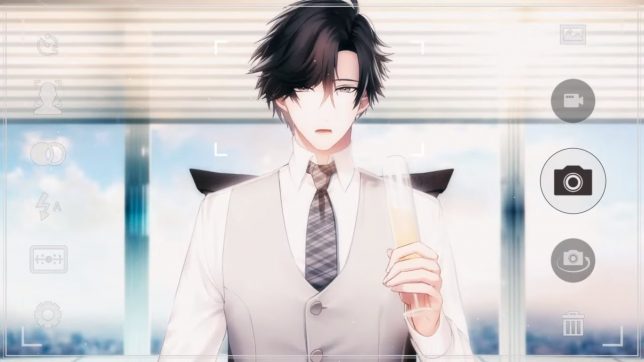 Oh, Jumin. What can I say about him? He’s a CEO and…OK, listen, Jumin’s kind of a jerk. I get that some people are into that, but I cannot be unbiased here. His is the only ending I didn’t get—I got the bad ending on Day 10 and couldn’t bring myself to redo it; it was that bad for me. If you’re into the very, very rich, standoffish bachelor who’s a jerk to everyone around him except you and who definitely wants to be the dominant one in your relationship, then he’s your guy. He also has a really cute cat, so that’s a plus. Other than that, I got nothing. I did not approve of him or his actions at all. Curious to see what I mean? Go play his route! … I will not talk about it. 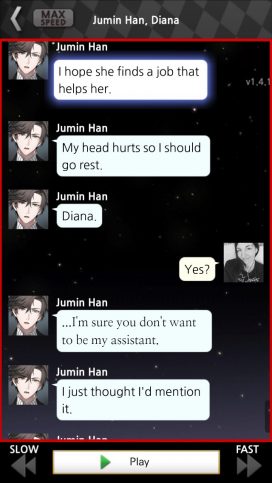 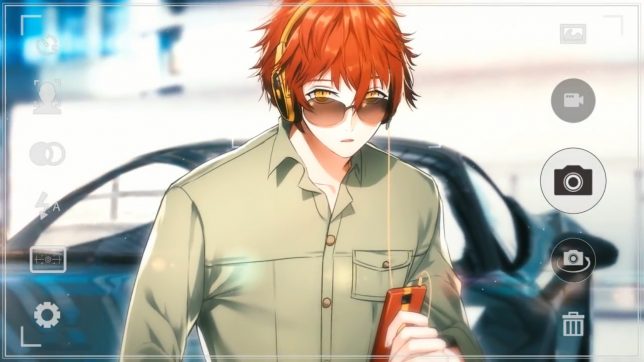 God bless everything; saved the best for last. Seven is an incredibly complex character, a quality I enjoy in my men. He’s a hacker who lives on chips and soda, loves his cars, and has a dark secret that you won’t find out until you break through his shell. Looking at his texts, you may think, “What shell?” but in person, Seven is so much more than the silly guy he puts out in his messages. I literally am Seven trash. His route I definitely recommend doing last, because it is here that all the mysteries will be solved. Seven is a literal blessing on this earth and I just want to make sure he’s happy. 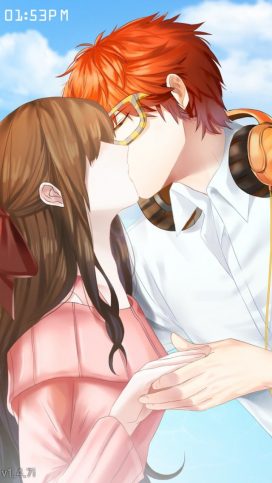 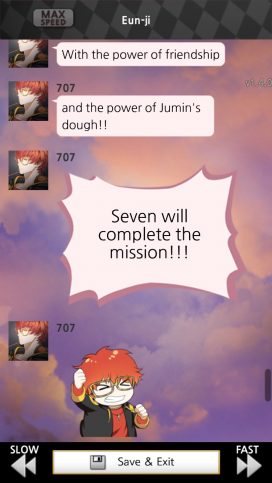 He’s such a dork in the chats and I love him so much.

But of course, what makes Cheritz games unique is their legendary bad endings. And trust me, these are BAD. Each character has both relationship (not getting enough hearts) and story (saying the wrong things too many times) bad endings, some of which require full-on walkthroughs to obtain. There are also some common route bad endings, which you can get before you even get a character pathway. And most of the bad endings in general involve the hacker, aka Unknown, aka this guy: 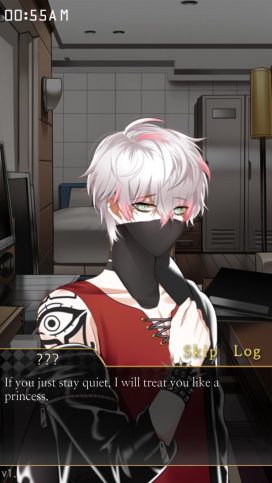 HE DOES NOT MEAN THIS.

Yes, this is the hacker who brought you into this whole mess. He has a plot which I will NOT spoil (it’s too good) but for the most part, whenever you see him or hear his theme, you know you did something very, very wrong. After you complete the Seven ending, you get access to a continuation of the story which deals largely with the hacker and his plot. And it’s amazing. I can’t even express how incredibly it’s all written.

Also for funsies (mostly in the deep route), sometimes he’ll show up in the chat and say creepy things like this: 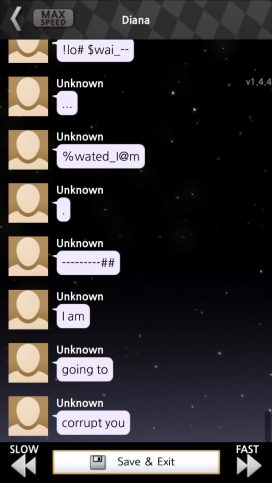 There’s just something so special about a dating sim that isn’t just a run-of-the-mill visual novel, where you can’t see them and they can’t see you, your only communication is through text. It’s very immersive—they often ask if you’ve eaten if your chats are around lunch or dinner and chastise you for being up late, which I actually kind of appreciated. The music is great, the art is great, everything is great. It addresses some deep themes too, like mental illness, family, friendship, and love. And with DLC being released around major holidays (Christmas, Valentine’s Day, and most recently, a WILD April Fool’s Day event), I know my time at the R.F.A. will never truly end. I definitely recommend this game to anyone who has not played a Cheritz game who wants to—unlike their others, this one is completely free.

Mystic Messenger is an experience you will never ever forget. The story is incredible, the dialogue is hilarious, and the characters are sweet and lovable (except Jumin—I hate that guy). If you’re looking for a new dating sim, but want something different from a straight visual novel, this is the game for you. Just try not to get too pulled in to their world; planning a party and managing college can be hard work.

And even though this app takes up an incredible amount of space on my phone…I can never ever delete it. 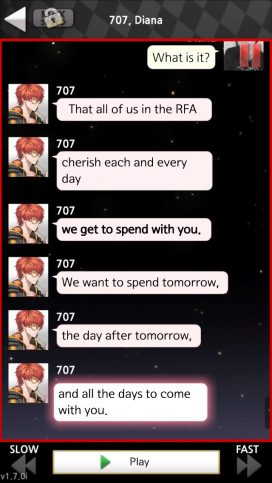 … Every time you think you escape, you know you can never leave the R.F.A.

If you're looking for thoughtfully designed challenges, don't pick this game up. You don't need the hernia.