Big Business runs the world and that’s a fact. You’re the CEO of a megacorporation and you’re out to maximize profits. Along the way, you will need to influence the consumers, destroy governments, research horrific new technology, and ultimately reshape the world in your image. In doing this you will manage your work force, bribe political organizations across the world, start riots, and manage death squads. Alternative methods can include influencing public opinion through meaningless charity, media control, and overthrowing dictatorships and other governments. In the end, you want to live forever and enjoy your ridiculous wealth. 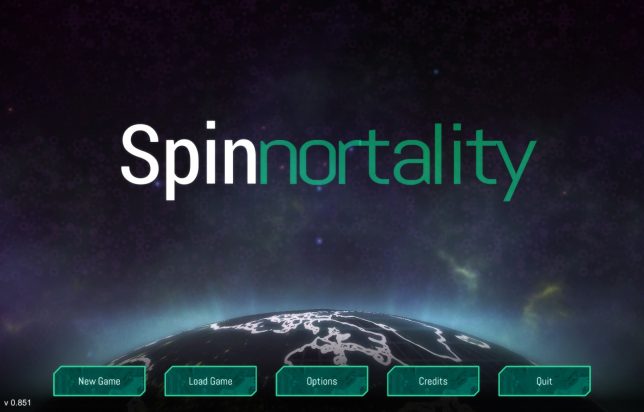 The world is at your fingertips.

Spinnortality is an independently developed resource management game built in Unity. Players control the CEO of a megacorporation and try to make money and extend their influence across the globe. You accomplish this through clicking across menus to research new technology, implement new media campaigns, and manage more clandestine operations. The end goals are two-fold: immortality and global control. Along the way, you’ll get various special events with positive and negative consequences. It’s a novel concept with complex systems operating behind it.

Oh what dreams may come.

Utilizing a view of a rotating globe, Spinnortality puts the player on the slow and steady track to global domination. You assign employees to research technologies which give you new campaigns to launch in the countries of the world, each campaign aligning with the various values a country may have. You can influence these values through media presence, bribery, or establishing a coup. You must maintain your public image while doing all of this, as a bad press campaign, internal corruption, and employee dissatisfaction can hinder your profits. All of this is accomplished through menus reminiscent of old MS DOS strategy games—X-Com: UFO Defense and Syndicate come to mind in particular.

Research, government meddling, and in game events all unfold through gameplay.

The concept is novel; the delivery of it is meant to make a player think about how advertising affects their views of real-world corporations. As much as it is an interesting strategy game to play, it’s also a thought-provoking piece of political art. In the real world, there are companies out there doing what players would do in this game, and Spinnortality presents this in a rather serious manner. The humor is pretty dry, meant to parody the real world and events within it, however we’re quickly reaching a point where parody is impossible. Instead, what we’re presented with is something equal parts Orwellian, and Gibsonian, darkly mirroring our own reality with a playful jab that hits close to home. It’s powerful, but perhaps in such a way that one might miss the statement it’s making. It’s easy to want to win the game, and it’s easy to focus on victory; however, when you step back and look at what victory means, it weighs upon you.

Parody and satire are par for the game’s humor, but often hit too close to home.

Spinnortality is in Alpha right now, and there’s a Kickstarter campaign offering the usual range of Kickstarter bonus features. Typically videogames will offer you a copy of the game, access to the beta, and then at larger increments a place within the game’s mythology. Spinnortality’s campaign allows for stretch goals, but is vague in what will be accomplished. The game is mostly done as of this writing, and the purpose of the Kickstarter is to determine the level of polish the game gets. I’d wholeheartedly recommend playing this game and supporting it, especially since it’s fully funded and in the final hours of the campaign. [Editor’s note: Due to no fault of the author, this article was delayed in publishing—but there’s still time!]