Dubai has been destroyed by a sandstorm, the 33rd Infantry Battalion lead by Colonel John Konrad deserted the United States military to stay behind, evacuate the civilians that would have been lost, and ultimately are all presumed dead or missing. You are Captain Martin Walker of Delta Force Special Operatives, your mission is to breach the storm wall and survey Dubai. After that, you leave the city and call for aerial support. Or at least that was the mission, until you run into American soldiers skirmishing with armed civilians. A mysterious Radioman is projecting propaganda across the city, and the Damned 33rd are at the center of it all. Now it seems your mission is to find John Konrad and discover what’s going on in Dubai. 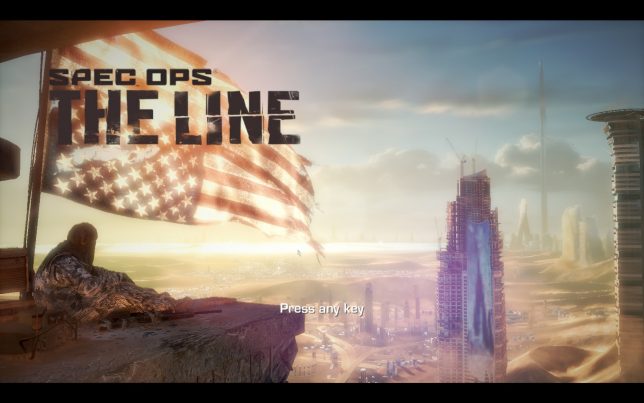 A blasted out electric guitar covers patriotic American music, and rather poorly too.

Spec Ops: The Line is a third-person American military shooter released across multiple platforms. It serves as a reboot of sorts for the ill-fated Spec Ops series, though it takes the game in a direction previous entries never explored. It was designed to appear like a typical shooter of the era, such as Call of Duty and Battlefield. Gameplay functions more like Gears of War; they made it a third-person cover shooter for narrative reasons. The story is where Spec Ops: The Line stands out from yet another American Military Hero Shooter, as it takes a dark and more realistic approach to such a story. It’s where the game stands out above all else, with the cinematography coming in at a close second. What you play is generic and honestly boring, but what you experience? It’s a bone chilling, horrifying story about the realities of war—one that you won’t find anywhere else.

Back when “context sensitive” was a buzzword.

Military and cover shooters were rather passé by the time Spec Ops: The Line came out, the videogame world burnt out by Gears of War, Call of Duty, Battlefield, and countless others. This was the first nail in the coffin, as the game is painfully generic. You trade shots with a small variety of enemies, popping out of cover, careful because each hit is lethal. Your health regenerates over time, but not fast enough to allow for a hectic run-and-gun approach. Sand plays a key role in the game: Grenades landing in sand have an added stun effect on them, and you can shoot out certain locations in levels to rain sand down upon your enemies for a similar effect.

Squad commands don’t really add enough of a new element to be worth mentioning either. There’s a painful deja-vu through the entirety of the game, that you’ve played this before, you play through a few levels on auto-pilot. The gameplay damns Spec Ops: The Line, as there’s only faint praise to be given—”Skip this if you’re already burnt out on Call of Duty,” the Magazines would say.

The game frames itself well.

The art of the game—of a destroyed Dubai, a city blasted in sand, men and women trying to live a life in the ruins—all lends itself to establishing Spec Ops: The Line as a unique experience. The visuals are often breathtaking: steel sticking out of sand, the lived-in feeling of the ruined city and the encampments you walk through. On the other side of this, some of the game’s most impressive shots are the most horrible moments in the story. What appears to be a bland military shooter is actually a cinematic masterpiece, as powerful and emotional as any film that received an academy award for wartime stories. You perform war crimes, and become an abomination in the name of your mission. The message is clear: War is messy, war is not glamorous, mistakes will be made, and the cost is more than what you can imagine.

The story takes you through some dark places.

And this, this is where Spec Ops: The Line honestly shines, honestly sets itself above any other military shooter. Martin Walker’s attempts to save Dubai, to succeed where John Conrad failed, drive the story in an engaging direction. If this were a movie it would be ranked alongside Saving Private Ryan. You start with a level culminating in a tense hostage situation, and that aching feeling that someone you worked hard to save dies anyway. It gets worse, finding the CIA torturing soldiers, soldiers torturing the CIA, civilians getting kidnapped and gunned down by rogue agents, and worse. The legendary scene, the strongest moment, when you drop white phosphorous upon an enemy encampment. And then the ensuing trail following John Conrad’s gruesome instructions via radio. The further you play the less fun the game becomes, the more intense the story is. And eventually you hit a point where the end is nigh, and you’ve won. However, is victory really worth it?

You reach the end, John Conrad congratulates you, and then the reveal happens. Spec Ops: the Line is not your standard military shooter, in the end it shames and condescends to you. It turns the power fantasy of having a gun and killing the bad guys upside down—what should have been an armchair excursion into a theatre of war is instead a traumatizing experience. It gets so intense that the later loading screens display messages to comfort you, the player, to try and remind you that the actions of Martin Walker are not your actions. It’s gruesome, it’s hellish, it sticks with you, and I guess that’s the reality of war. The thing to remember about Spec Ops: The Line is that at least you’re fortunate enough to leave it behind after you finish the game.

Spec Ops: The Line does attempt to moralize.

That’s it, that’s Spec Ops: The Line. It’s tough, it’s gritty, it hides underneath mediocrity. You see some horrible things playing through, you do some horrible things. But in the end, you’re not Martin Walker, you never did anything. You can still go home. Do I recommend it? I don’t know, but it’s a story worth playing; a story that makes you look at other similar shooters and question the motives of the story they’re telling. Right now it is free on Humble Bundle, so you can try it there. I regret playing it, but I do not think that experiencing it was time poorly spent.

A great game with wasted potential, ported to a system with a similar fate, leaving it to be forgotten in the sands of time.