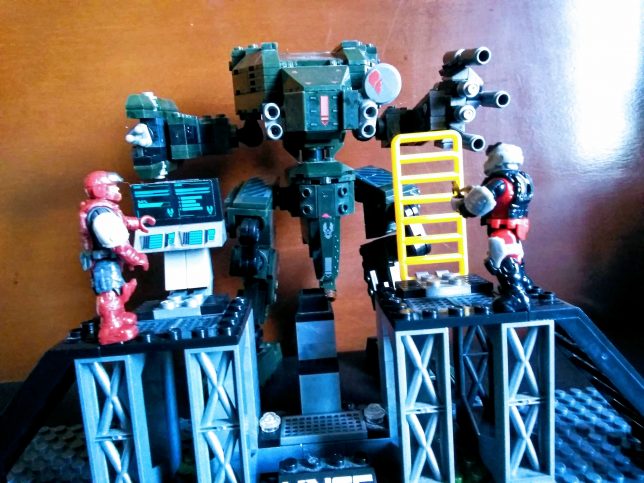 Welcome again to the third edition of “The Halo Mega Blog”, which is not only a place where you’ll find me showing off the Mega Bloks (or Mega Construx) models I have in my collection, but it’s also a place where I’ll  talk about the many vehicles found in each Halo game as they are a big reason I still care about the franchise. This time around, we’re going to talk about the UNSC Mantis: The first—and yet the only—fully playable mech in the main series so far. Before talking about the Mega Bloks model and how I got it, I need to tell you that this vehicle and I have a history.

Remember back when I talked about the shitty behavior of online players? Yeah, I don’t miss those days.

You see, Halo 4 was the first game in the series that was developed by 343 Industries after Bungie—the original developer—parted ways from Microsoft Game Studios in 2010. Back then, while I still liked the Halo series as a whole, I was really looking forward to the series evolving into something else. After ten years, playing an augmented space marine whose skills mostly involved jumping, shooting, and throwing grenades started to feel a bit old, therefore I was just hoping that the new management would try something new for a change.

Unsurprisingly, the game didn’t suffer many changes…I really can’t blame them, they just inherited the most successful franchise the Xbox has ever seen—they needed to prove that the new games were on good hands before anything else. And while they succeeded in that department, jaded old me felt a little disappointed and, although I had plans to play the game close to its release date, I wasn’t really as hyped as I used to be for previous releases.

But this vehicle—the Mantis—which premiered on the then-new release was a big surprise, and they even released a trailer for it. The Mantis appears around the 0:30 minute mark, but what I really want you to see is what happens at the end of the video (after the 1:00 minute mark):

Yep, that’s what it is. The Mantis—the then-new and exciting vehicle in the Halo series—is teabagging an enemy on the field on an official trailer for the game. And this happened the same week Dave Vargas—the “Picture Man” from the Direman Press webcomic requested me for a guest entry, so there’s documentation of my exact feelings toward that video: 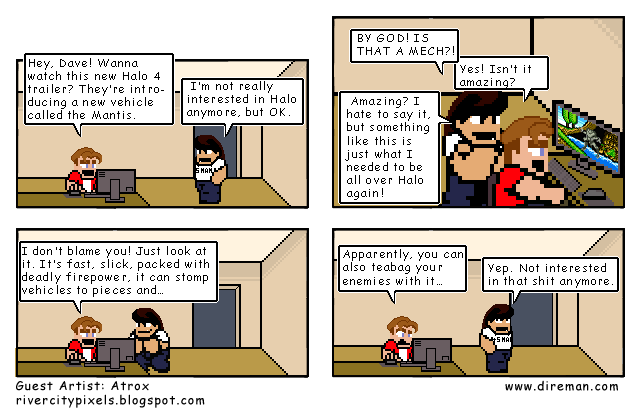 For a guy like me, who had spent a good part of his life advocating for a more welcoming and inclusive environment in the videogame community, this felt like a slap in the face. This kind of garbage is why people who enjoy videogames have a hard time talking about them in public. It makes it easier for the common person to lump all of us in with the childish, immature, foul-mouthed man-child who—among other things—seems to believe that rubbing their (virtual) genitals against other people online is a “normal” behavior.

As a matter of fact, I don’t think many people have noticed, but these games are rated M for “mature” audiences…why does it look it’s targeted at sex-craving teenagers?!

Anyway, it’s rather hard for me not to link these things together, the first bipedal mechanical vehicle that appears in the game series—the Halo equivalent of an Imperial Walker, or a Metal Gear—and on its premiere, someone on the marketing department thought it would be “OK” to stain it with a taste of the crude behavior from its online community. Remember back when I used to talk about the shitty behavior of online players? Yeah, I don’t miss those days.

Leaving all that behind, the Mantis is an amazingly designed vehicle which is a delight both to look at and to play with. This model is entirely moveable and can be posed in many ways. The unique pieces you will find on this package are the cockpit, including a hatch on top that will keep the operating figure concealed, and the feet which I don’t think you’ll find anywhere else. Also, the model comes with a base where you can rest the Mantis which makes it look really cool to have it displayed…particularly on my desk. 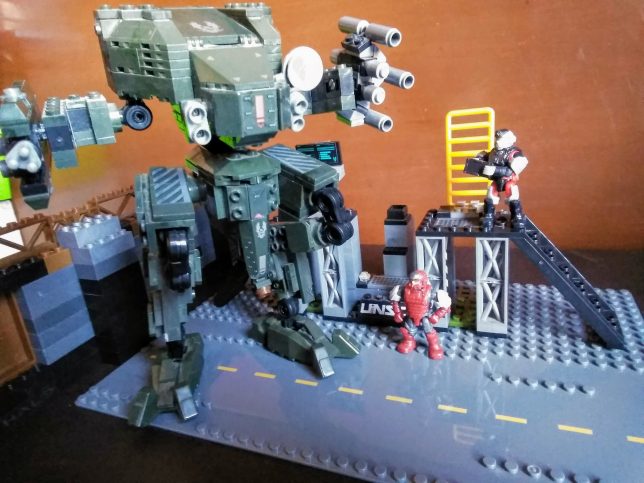 Let’s talk about how I got it, now!

In the previous episode of this blog I talked to you about how I got my second model (the UNSC Cobra). By then I was OK having just these two models…I mean, it’d be cool to have a little more, but I wasn’t very keen on spending more on stuff that—let’s face it—I didn’t need.

At some point in 2013 I found the news that Mega Bloks was making a model for the Mantis, and the buildable model looked like the stuff from dreams and pretty faithful to the source material. Hell, I’d always wanted to have a LEGO walker from their Star Wars series, and this one looked pretty much up that same alley (later I’ll cover why I don’t collect LEGO, spoiler: it’s the price!).

By that time, I was still working as a teacher, but I also found another part-time job, so finances were looking a little better then, but I was still not crazy about getting more models I could store somewhere around the house while promising someday I would get around and actually piece them together.

But then—during another of my trips into the toys aisle—I found it. I had actually never seen it before, and now that I think about it, I don’t know what the original cost of this thing was, but I found it at a price that was surely way below half off!

Ecstatic, I took the model back home, not being able to believe I actually got it that cheap! At the same time, a small feeling of guilt crawled into my mind: What if someone messed up the price? I mean, forget about the store I got it from, if there was an employee involved, they could face consequences over that! I tried to dissuade that thought for the rest of the day, because…that just couldn’t be it!

I went back to the same store a few days later (it was only a few streets away from home), and I felt relieved from that guilt from before. Not only the Mantises were still there at that same price, but also the personnel had pasted new handwritten price tags that implied that they were indeed on sale. My first thought was “Now you know it’s not a mistake…buy them, stupid!“—next thing I knew I was carrying two models with me back to the cash register. I repeated the same process like two or three times the following weeks until all the mantises were sold…no, I didn’t buy them all! But I did help that store to get rid of their, uh, Mantis infestation. 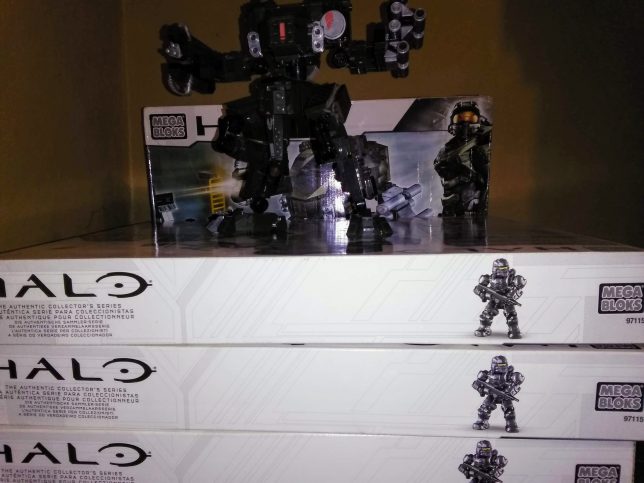 My UNSC Mantis in front of and on top of unopened Mantis boxes.

Anyway, thanks for reading again. As you might have realized just now, this column will not only talk about the models in my collection, but I will probably jump into something else related to Halo or gaming in general, and this was one of those cases.

Not for the faint of heart!