As an Internet website about videogames, it’s difficult to find meaning in business as usual during the current cultural climate.

Black lives matter. It shouldn’t need to be said, and you shouldn’t need to hear it from another straight white cisgender male. Listen to marginalized members of your community. All lives don’t matter until the lives of people of color matter, until the lives of trans and queer people matter—until all people currently marginalized in this country and around the world can safely live their best lives.

If you’re here, you likely agree. But maybe you’re like me and you’re not sure what you can do individually…and that’s where my favorite videogame platform, itch.io, comes in! 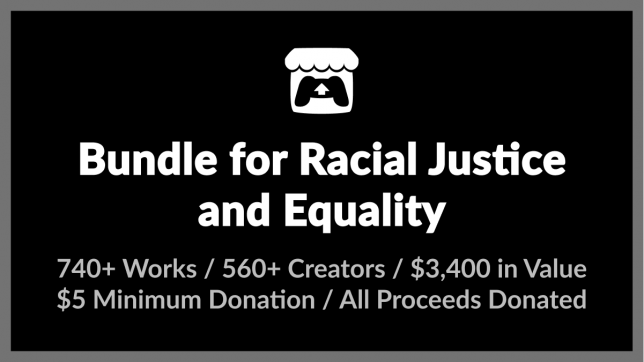 For those unfamiliar, itch.io is a game platform like Steam or GOG, with a focus on indie games. For those familiar, you may remember A Good Bundle from several years ago, and this time around leaf has thrown together an official itch.io Bundle for Racial Justice and Equality, supporting the NAACP Legal Defense and Educational Fund and the Community Bail Fund. For those of us who want to do some good as much as they want over 700 indie games, the minimum donation is $5 and 100% of it goes to the stated charities.

With that many games, the offerings really span the entire spectrum of content. From big GameCola favorites like Night in the Woods, Catlateral Damage, Oxenfree, Overland, and Kaiju Big Battel: Fighto Fantasy, to small game jam games, to pixel art bundles for game developers, to tabletop RPGs and card games…pay your $5 (or however much more you want!) and just enjoy the surprise as you scroll through the list. Even developers with games still in development, like Johan Vinet whose Kickstarter game Lunark is still well away from release, are making an effort to be part of the bundle in one way or another.

And that’s not the only bundle! If you’re not feeling the games in the list or you prefer to donate to different charities, itch.io’s Bundles page has plenty of related charity bundles going on right now. Another big one is the Black Lives Matter Support Bundle, donating 100% of the money to Black Lives Matter and the National Bail Fund Network. This seems to be the second biggest charity bundle on the site right now, and it’s put on by Contigo Games, who I had the pleasure of meeting at Boston FIG a couple years ago. The minimum donation is higher at $20—or $40 to get everything—but the bundle has some bigger names involed: from Coffee Talk, to Emily is Away Too, to Contigo’s own StarCrossed (which I played at Boston FIG, and recently released on Switch). Spread the love and do what you can.

Games are fun. Social justice is better. But why not a bit of both?

My Fanzens (or, perhaps, my Franbase...if you have a preference, post!)...this is a sad, sad day in the annals of GameCola history. You might've felt a little blue when we started dividing our issues ...