You are JOEY CLAIRE and XEFROS TRITOH, a HUMAN and TROLL on the STRANGE and NORMAL world of ALTERNIA. The HEIRESS just utilized her DRONES to BOMB the town of OUTGLUT. You are ON THE RUN, and headed to meet TETRARCH DAMMEK’s friend CRIDEA JEEVIK at her party, JEEVIK WEEK. However nothing is ever so simple for JOEY and XEFROS, and the long TRAIN RIDE will have them navigating the full(ISH) extent of the HEMOSPECTRUM in… 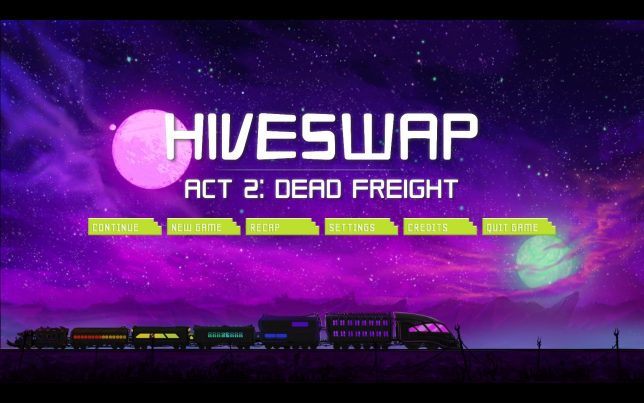 “And thus the curtains are open. The stage is set. The lights come down, and Act 2 of our little play begins…”

HIVESWAP: ACT 2: DEAD FREIGHT is the sequel to the long-awaited HIVESWAP, which in turn is the long awaited Homestuck adventure game! Initially promised as a complete release, HIVESWAP suffered disastrous sabotage and most of the unprecedented Kickstarter funds were stolen, and the episodic format is what we’re receiving now. HIVESWAP is a point-and-click adventure game following in a classic tradition that usually will feature ironic usage of old English. You point, you click, a useless joke pops up, and then you cycle through the red herrings you’ve collected until you finally find the right solution in some strange stretch of logic. You follow Joey Claire (Extraordinaire) and Xefros Tritoh in a direct continuation from Act 1‘s ending, and proceed to an anticlimactic cliffhanger. Along the way, nonsense ensues.

At a glance, HIVESWAP: ACT 2 is just business as usual

Gameplay is simple: Point at object, click object, character makes a funny remark, story does not progress. I’m less amused by HIVESWAP: Act 2 than I am by the first act. I found some of the puzzles to be obtuse in ways that mirror the worst of classic adventure games. There’s an entire Ace Attorney skit that drags on for far too long, which I’m going to have words about later in this article. There’s a character switching mechanic that’s incredibly lackluster, and woefully underutilized. It’s alright, I guess? It’s a point-and-click adventure game, no need to reinvent the wheel. It’s underwhelming, but when you’re playing in a genre that’s been played for three decades it is really hard to make something new.

At a glance HIVESWAP: Act 2 has pretty much the same art style as HIVESWAP: Act 1 did, but looking at the game for eight hours made me realize some things. The animation feels less fluid, like there’s fewer cells per animation or smear frames, or something fancy and technical. The UI looks less charming than the last time we saw it in Alternia—it’s mostly a subtle change but it’s a little jarring at first. There’s a lot of vertical flip inconsistencies through the game, and lots of other little things. It’s cute H0mestuck Hero Mode stuff like in HIVESWAP, and while there’s little flaws it’s not like the game is ugly. The backgrounds are amazing, though! They’re full of alien elements, colorful characters, and lots of little details. Unfortunately they’re also full of many details you can’t interact with that seem like items you should be able to use to solve puzzles, or the opposite where the solution to a puzzle is hidden in the detail. It’s little things that bite me; nothing bad, but also something that we’ve had thirty years to make better. 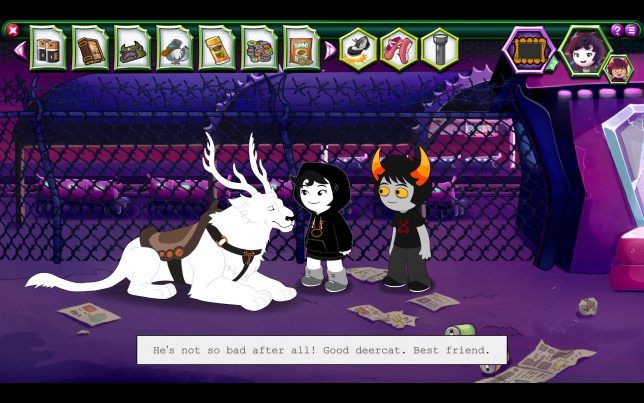 Everything looks just a little different.

The story picks up with the bombing of Xefros’ home town of Outglut by the Heiress’ drone armies. The continuity is alright; you can import your saved game to keep items and presumably choices from Act 1, and some of them even have uses later on. Characters are charming, each have unique styles of speech, and personalities appropriate to their culture in the lore. There are some minor inconsistencies again, in particular with Joey slipping up in reference to her parental figure. Otherwise there’s the humor we expect from a Homestuck, and What Pumpkin Games, Inc, property. It ends on a cliffhanger due to being the second act in a longer story, and excluding one point where the game drags, it’s pretty satisfying of a conclusion!

Alien elements come to the forefront of HIVESWAP: ACT 2.

The story takes you on a trip through Alternia’s Hemospectrum—the blood caste system that binds the alien troll species. Troll lifespans, physical prowess, and social station are matched with their blood color, and HIVESWAP: Act 2 focuses on that as a central part of the story. You explore each world through the hemospectrum from the lowest colors, Rust and Mud, through to Yellow and Olive, Jade and Teal, Blue and Indigo, and finally into the Highblood purple. Missing are the seadwelling Royals, and of course the Fuchsia heiress and empress. Each train car has a distinct aesthetic, each character a unique representation of aspects of their caste, and enriches not only the HIVESWAP experience but also even the Homestuck experience as well. It also provides a serious examination of the injustices of the hemospectrum, and takes the concept of systemic inequality rather seriously. Whether this is due to the expanded media, or a new writing staff, HIVESWAP handles issues within the Homestuck universes in a way that the original media never could.

A glimpse into the alien society of Alternia takes you from the bottom to the very top.

HIVESWAP: ACT 2‘s soundtrack is still a powerful feature of the game. Toby Fox and James Roach are joined by Clark Powell to create this memorable audio experience. The main track, “Ticket to Ride”, has a four-step almost swing dance rhythm to it that assists in the game’s momentum. There are several variations to this track for each of the train cars that the story takes place in, each one fits the general personality and qualities of the castes they represent. The unique tracks give off a variety of influences, some from sources like Final Fantasy, Studio Ghibli, dramatic synth pop, and more. For originating from a visual medium, the audio experience of Homestuck and HIVESWAP both are defining features. 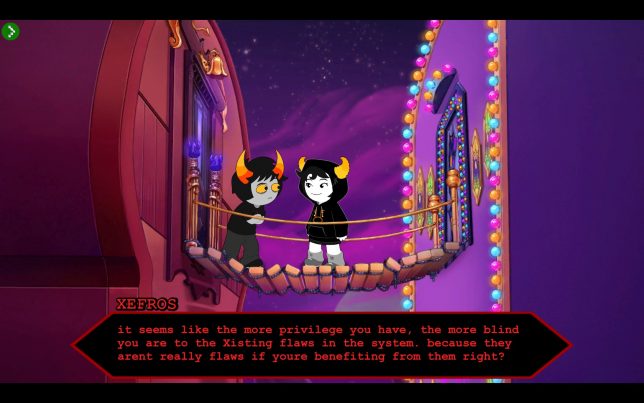 Representation fails and succeeds in exactly the same way HIVESWAP: Act 1 did. Homestuck‘s stance on race and gender identity still applies. Human characters are aracial, and can be of any race the viewer desires. All characters are their gender identity and can be trans or cis as the viewer desires, unless otherwise stated. Joey Claire definitely likes other girls, and is probably a lesbian in the closet. All the trolls are pansexual aliens who view hetero and homosexuality as strange deviances. We see many nonstandard romance types because the trolls are, again, aliens with a very different culture. Many trolls are disabled, missing eyes, limbs, suffering from chronic physical illness, or mental disorders. It’s all cool I guess? It’s not perfect—that whole aracial thing is the coward’s way out—but it’s still a step in the right direction. 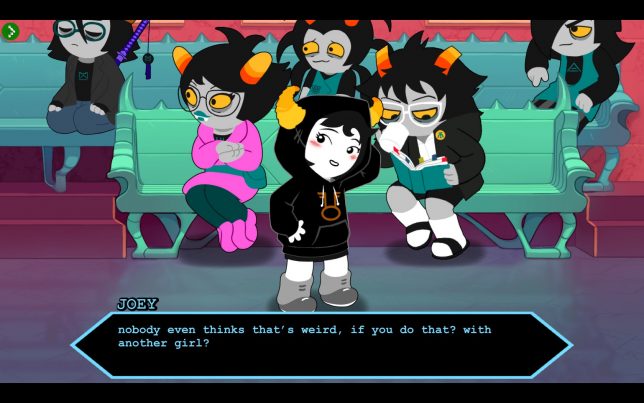 What’s wrong with this game? Well for starters the puzzles got kind of obtuse, and the game even goes as far as to lampshade this. The red herrings are less obvious, the right path to take more obscured, and sometimes sequences take too long. Mechanics that should probably be more prominent, such as STRIFE and the character switching, aren’t as important as one would think. Some items have no immediately apparent uses, and others never seem to come up. Some puzzles are a matter of trial and error, while others feel like you’re meant to exhaust all possible options before continuing further. This becomes most apparent in the Novice Legislacerator segment. Oh, right, improper use of the term “triggered” should go in as a negative.

I told you all I’d have words about this segment; I warned you! This kind of deserves a whole paragraph because of how long the segment is. There comes a moment where a mock trial is staged. The judge is no mere beast but instead a highblood of some esteem, there’s a defensive legislacerator and a prosecuting legislacerator, and the suspect is innocent until proven guilty. This takes way too long, the puzzles are way too obtuse, and one ends up needing to use the hint button way too many times due to the nature of how evidence may be applied. It was clear someone on the team wanted to make an Ace Attorney parody game set in the Homestuck universe, but the charm wears thin. Personally, I just wanted the segment to end almost immediately after it started.

This looks endearing, but you’re gonna be hitting that hint button A LOT.

Is HIVESWAP: Act 2 worth the purchase? If you’re a diehard Homestuck fan, then you already own it, have played it, and have probably seen all the extra content I missed in my first playthrough. If you’re a lapsed Homestuck fan, it’s sitting in your Humble Library, a forgotten reward from a Kickstarter campaign that mattered a lifetime ago. Maybe it’s too little and too late? If you’re a fan of the point-and-click adventure genre, it’s not a bad game. Play Act 1 to see if you like it, but I’d recommend it if you’re looking for a new game. It may not leave a legacy like Day of the Tentacle, Monkey Island, or Longest Journey, but it’s worth a shot. 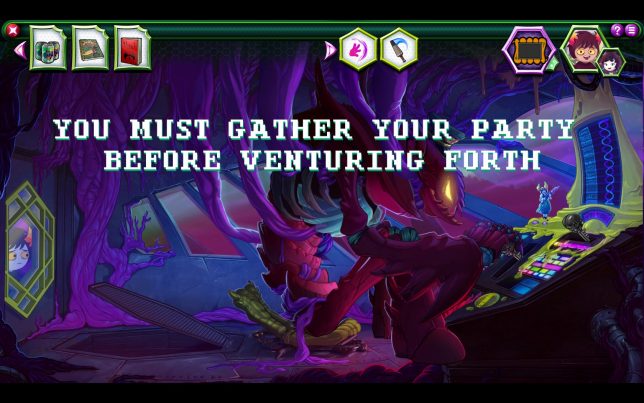 Looking for a fun, non-terrifying game to play during those boring class lectures? WELL STAY AWAY FROM THIS ONE!!!