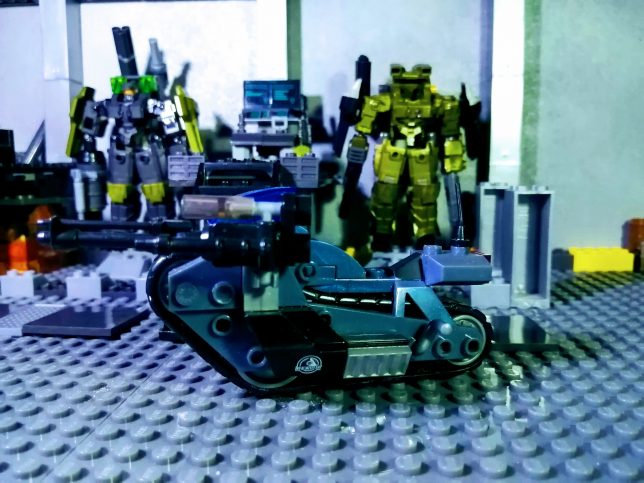 You know, the original idea behind this column was to share how I came up with my collection in a chronological order, but as time passes and my collection gets bigger, I simply lose track of which sets I got at any given time.

This is why I’ve decided it’s better to jump on the sets that lead me to a topic worth discussing, whether about my collection, the sets themselves, or my thoughts on the Halo franchise as a whole.

This time around I wanted to talk about the UNSC Siege Bike—but as much as I try not to, that conversation will lead me to talk about the Mark I Prototype Exosuit and The Green Machine, so I’ll be covering these sets from the Halo Mega Bloks / Mega Construx series as well.

These sets have a couple things in common: One is that we have never been able to pilot these vehicles in the main game series to date, and two, one could say that they don’t quite exist in the Halo universe…or do they? Let me explain. 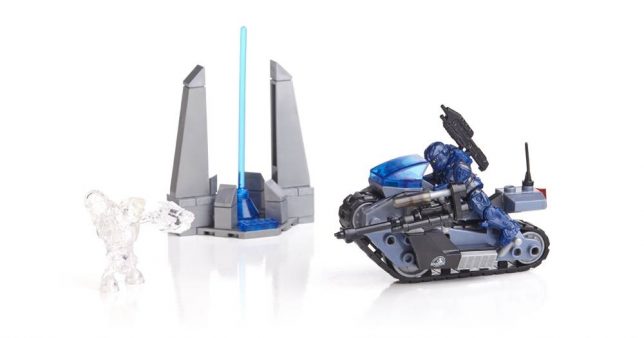 Let’s talk about the UNSC Siege Bike first. It is an all-terrain bike with single-traction tread instead of wheels. These serve to carry not only the vehicle operator, but also the heavy machine gun mounted on one side of the vehicle. As mentioned above, this vehicle has never appeared in any game or piece of media related to the series; the Siege bike, along two other vehicles—The Light Assault VTOL and the Quad Walker—were designed by Mega Brands based on some concept art provided by 343 Industries in order to create a new line named REAP-X.

It was stated that Mega took some creative decisions during the making these sets—and it shows!—so this line was a way for the company to extend their offering beyond the trademark vehicles from the series…as such, I was not interested in getting this set when it originally came out.

Let me clarify that a bit; before I started actively collecting these Mega Bloks (now Mega Construx) sets, I only cared about the mainline vehicles, especially those that had made their appearance in the games. I had seen this vehicle several times in my visits to different stores, and while it looked…kinda cool, I didn’t feel like adding yet another unopened set to my “maybe I’ll start assembling it one day” Mega collection.

That changed the day I saw it on sale, which prompted me to finally get it. I’d been saving it for quite a while, and I decided to assemble it last year when I started unpacking my sets—this one was good choice since it’s a very small set, so it wouldn’t take up much of whatever I was doing that day. 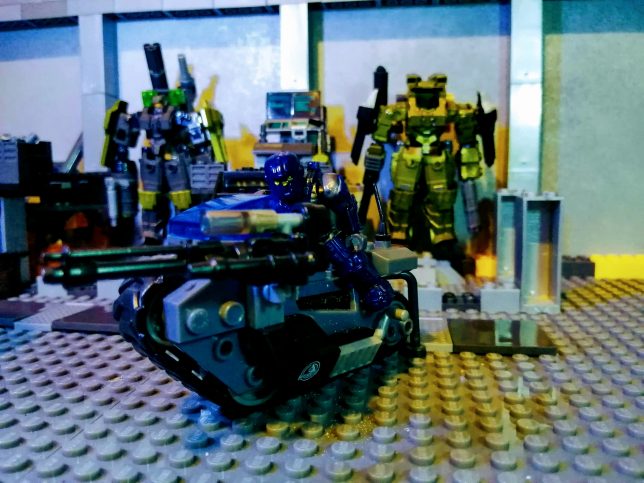 The UNSC Siege Bike, as seen in my collection.

I ended up liking it enough, I mean…look at it. I generally love vehicles on treads, so this vehicle—while not exactly canon—was pretty up my alley.

So what’s so important about this set? Well, as you can see, it did make me dig a little deeper into the lore behind the Halo series (thanks mainly to sites like Halopedia). I learned about the REAP-X department (which is a canonical department of the Office of Naval Intelligence in the Halo universe) and other things related to the series, and I ended up wondering…what’s exactly canon in the Halo franchise, and what does that exactly mean?

This is how my conversation automatically veers towards the Mark I Prototype Exosuit. Previously known simply as The Prototype, it appeared for the first time in the short film by the same name as one of the seven episodes in the Halo Legends animated films. 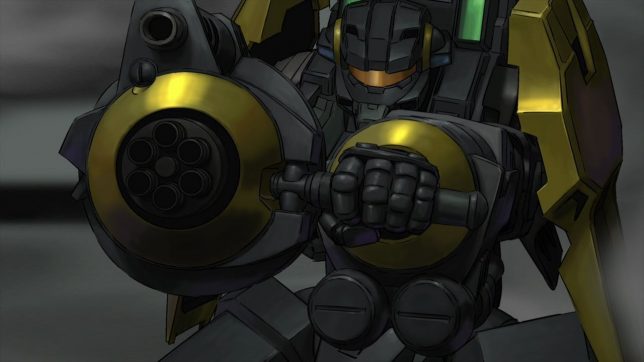 The HRUNTING/YGGDRASIL Mark I Prototype Armor Defense System, aka The Prototype

The exosuit itself was designed by Shinji Aramaki—anime director and legendary mechanical designer, whose designs range from the original ’80s Transformers TV series and the short-lived M.A.S.K., to more recent animated films and series like 2003’s Astroboy, and Mobile Suit Gundam MS IGLOO—while the animation was directed by Yasushi Muraki, who has worked with other well-known mecha anime series like Ghost in the Shell, Neon Genesis Evangelion, and even the original Macross (familiar from Robotech outside Japan), when he worked besides his mentor Ichirou Itano—who also has a long-running pedigree in mech animation, including the original Mobile Suit Gundam.

And that pedigree shows!

Frank O’Connor—Franchise Development Director at 343 Industries—was involved in the creation of this episode (as well as the others), and he was in charge to make these short films to match up with the main Halo series. His remark in regards to this episode was that:

The end result of this new vehicle, turned out to be a very overpowered weapon against the Covenant forces, which might have been a good reason why the collective knowledge of the series would have disregarded it as non-canon.

I mean, some of stuff seen in those Halo Legends episodes has either slight inaccuracies, or the creators took artistic liberties with their source material, so it turned out to be a real surprise to see no other than Sgt. Avery Johnson wielding a remarkably similar version of the Prototype as one of the expansion leaders in Halo Wars 2. 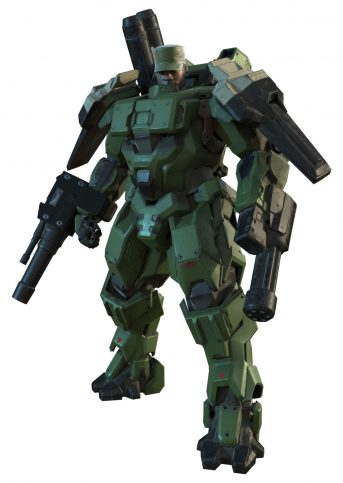 HRUNTING/YGGDRASIL Mark I [J], aka “The Green Machine”

This is now considered Sgt. Johnson’s own customized version of the Prototyped dubbed “The Green Machine”. Canonically speaking, it remains uncertain how—or if—Johnson ever actually got his hands on this weapon at some point during his lifetime, but its appearance in the game made it canon for all intents and purposes.

Now that this piece of media leaked into the Halo Mythos, it has been fully contextualized as the HRUNTING/YGGDRASIL Mark I Prototype Armor Defense System—which, while effective against the Covenant, was considered too expensive and inconvenient for production, and canonically its design not only predates the aforementioned Spartan’s Mjolnir armor, but would also become the basis for other UNSC’s technologies, like the Cyclops and the Mantis. 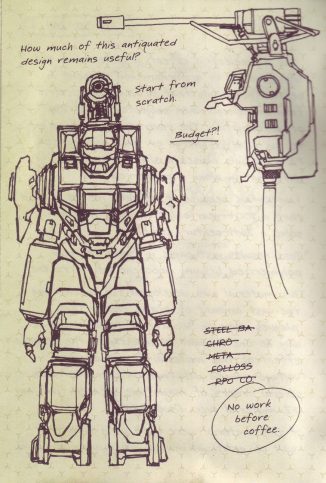 The Mark I Prototype according to Dr. Halsey’s Journal.

The Mega Construx series then made buildable sets out of these mechs. The first one was Johnson’s Green Machine, which was packaged on the Banished Marauder Strike set, and a while later they released The Mark I Prototype Exo Suit independently, both now in my collection (below). 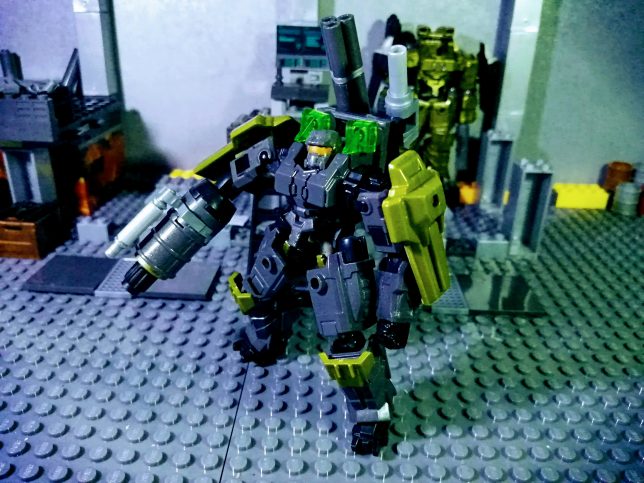 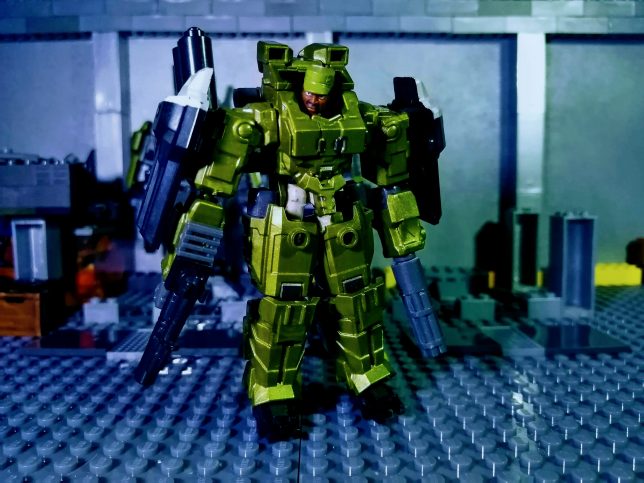 The point I’m trying to make here is that collecting these sets made me appreciate how many hands and how many influences can touch a beloved piece of media, and how much a franchise like Halo can grow as a whole because of it. The clearest example right now was also caused by Halo Wars 2 a few years ago, which dared to bring in a new enemy into the series—The Banished—and they became so popular and loved by many Halo enthusiasts (like yours truly) that they have now become the main enemy on the still-unreleased Halo Infinite.

So, what if a vehicle is not exactly canon for the series? It doesn’t mean it never will be. As a matter of fact, that VTOL from the REAP-X series later appeared in the Halo: Spartan Strike game (which was renamed as the Kestrel from that game on), so one can only dream of seeing them going canon…and if they don’t? Well, one can at least enjoy the ride, huh? 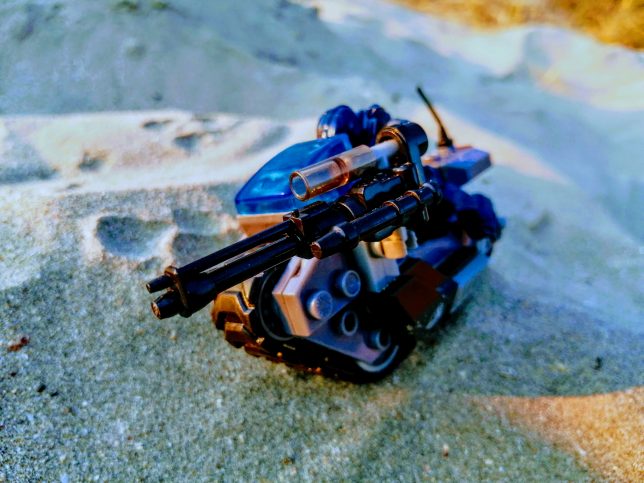 Telltale Games, once again proving that its target audience is me, has announced work on an episodic series of games based on Back to the Future, the classic time-traveling 80s movie inspired by the