This classic GameCola article was originally published in August, 2007.

Behold this unholy union between Rock, Paper, Scissors; Pokémon; and Mario Paint: Magic Pengel, a monster-fighting game in which you can draw your own monsters and fight them against the forces of evil.

Want to control a 12-legged spider with knife-hands? Draw it. Want to control a demon penguin with projectile eyeballs? Draw it! Want to control a 4-armed, 7-legged bucket of fried chicken with three asses that shoots swords? Draw that shit! You’re the boss in this game, and your adventuring party is limited only by your own twisted imagination. Need a real life example? Fine, let’s say you’re a 26-year-old with a third grader’s sense of humor. You’d probably do something childish like, say, draw a large phallus that looks like a stegosaurus, or a man with a baboon ass and a comically large penis covered with Gonorrhea discharge. Naturally, these were the first things I did upon getting this game. Your mileage may vary. 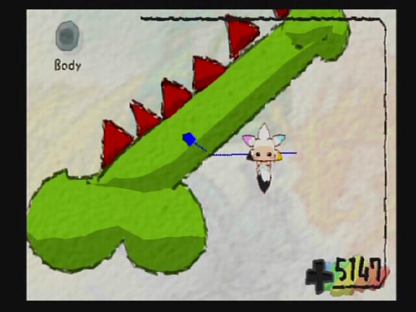 The game’s drawing mode, unfortunately, came about one generation too early, as this would be an excellent candidate for the Wii or the DS with the touch-screen/motion sensitive controls. Drawing a 3D monster with two thumb sticks and a few buttons, however, does not make for ideal results. The game makes up for this as much as it can, though. If you got through Kingdom Hearts’ gummy ship garage, you’ll get the hang of this pretty quickly. 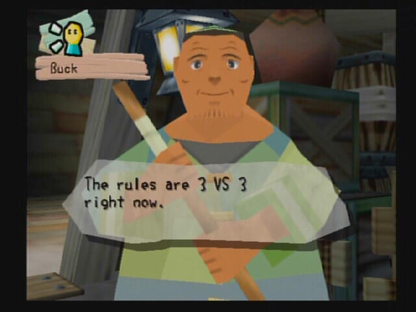 The turn-based fighting system leaves a lot to be desired. Though you choose between Attack, Magic and Block, the fights don’t go as they would in a Final Fantasy game. In Magic Pengel, Attack, Magic and Block work like Paper, Rock and Scissors. Your two biggest allies in this game are the ability to draw something with good defense and HP stats and dumb stupid luck.

Another unfortunate aspect of this game is that the entire game can be summed up by the following:

Draw a character, go practice fighting, walk to the castle to fight a real enemy, use whatever drawing power-ups you received to strengthen your doodles, repeat until you beat the game.

There’s no world exploration, no scenery. You get a field, a practice arena, a little shopping district and a castle (and, at the end, a few rooms inside the castle).

And, while we’re discussing the game’s flaws, even though it’s such a small game, you’ll still find yourself running into a metric fuckload of loading screens. 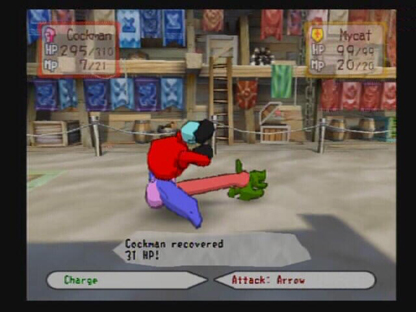 And, of course, it wouldn’t be a Taito game if it didn’t have plenty of Engrish, and Engrish it has, my friends—Engrish it has. Most notably, a vegetable stand that displays multiple signs that say “FLESH”. Presumably, they do business primarily with vegan zombies. The monotone voice acting is no treat, either.

Despite its flaws, the game’s actually pretty fun. It’s not too long, so you could feasibly rent it and beat it in a weekend if you put some good time into it.

We can only hope Taito revives this series for a sequel on the console it was truly made for—the Wii.