Brave Fencer Musashi is another one of Square’s journeys in to the realm of gaming outside of RPGs. For the majority of Squaresoft’s life in the gaming industry, it has remained in its little RPG corner, creating some mildly successful games such as Final Fantasy VII. Along with games like Ehgreiz and Chocobo Dungeon, Brave Fencer Musashi stands out in Squaresoft’s line up as a non-RPG. The Squaresoft name alone isn’t enough to give BFM the recognition it may very well deserve.

The game begins by plunging the player in to a medieval realm desperate for a hero, evidently called the Allucaneet Kingdom. For years the kingdom has been raped and pillaged by the fearsome Thirstquencher Empire. Just as the kingdom’s peril seems to be at it’s peak, Musashi is summoned. A wee lad with wild purple hair, Musashi is taken from his home world and is unable to return until his duty as hero has been completed. And so, Musashi’s quest to rescue the kingdom begins. 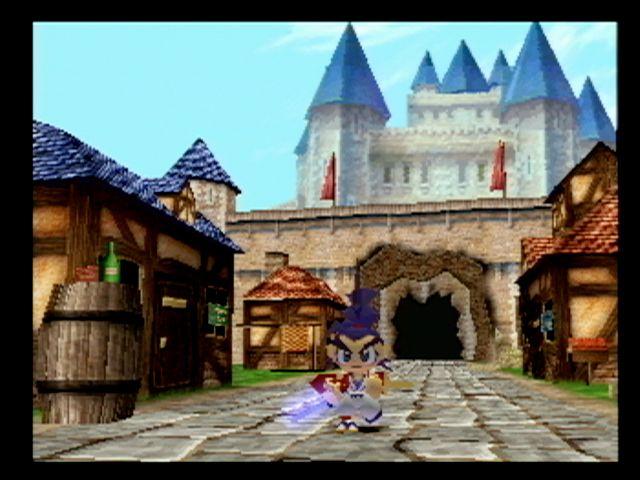 Sporting many cool action/RPG features, Musashi’s quest is hardly linear. Practically everything the player does while playing affects Musashi and his quest. The more exploring done, the more his overall familiarity with the world advances. Talking to people affects his social standing. Perhaps one of the coolest features is the real-time environment, changing from night to day, raining, and snowing. And this feature isn’t just for looks; certain shops are only open at certain times and different quests can only be completed under certain conditions. Yet another nice touch is the Assimilation feature, which allows Musashi to assimilate (gasp!) the powers of his enemies. The gun-toting soldier yields a handy long distance rifle to snipe enemies or hit that switch across the river.

Graphically, the game is about as good as one would expect from a PlayStation game. Characters are a bit polygonal, but keep that cartoony feel. The really impressive part of the game engine is the massive 3D world for you to explore, while still maintaining a light load time. Controlling Musashi is nothing special, using the basic action game setup.

Overall, Brave Fencer Musashi is quite a marvel: a game that is easy to get involved with while at the same time boasting simple game play and a vast world to explore. It’s not quite a Zelda, but its many unique features are enough for it to stand out among action/RPG’s. In fact, BFM may just be PlayStation’s best adventure platformer. Check it out.

Your friends have all said, "Nier's rubbish, mate." These so-called friends of yours are the kind of scum who insist that the Scott Pilgrim movie is better than the comics. They're so shallow that the