GameCola fans and writers describe their favorite (and sometimes least favorite) games of all time.

10. All Spyro Games (Playstation)- Saddly I have played all the spyro games. And yes i did get bored before i finished. That leaves most that i started games on unfinished… NEVER TO BE FINISHED. Mwhahahaha. You get a little bored running around as a little dragon…. freeing older dragons. NOt to mention he has a horrible attitude problem, lets put it this way… under any other cercimstances I would not be his friend.

11. Final Fantasy IIX (8) (playstation) – i played this till i got bored. I ended up looking at a clock counting up to 20… for 20minutes. Then relized nothing happend. So i am still at that part. Haven’t given up long ago… please help me!

9. (right this is a count DOWN!) Final Fantasy X (playstation2)- Dont get me wrong I love the game. It’s a very awesome interactive movie. But yet again I got stuck at a hard to beat part. Second Sin Spawn…. the one with the arm shelds, that pukes on you… yeahhhhhh.  Can’t beat it. Excuse me that they made your key player, the main guy a fucking weakling, even wakka has more stenght then him. Sad really. My three strongest are uhhh Aarron Wakka and Lulu. Do you k now how to help me. It’s really not help i need, just maybe tecnique or stronger people. I refusse to let someone beat it for me thou, Cuase the way i see it  the next time some big bad dude comes along i still wont have the skill to beat it. AND whatabout when i need to beat sin! then what? I’ll tell you what im screwed totaly lacking in skill. where was i going with this….

8.  Zelda (the one for N64, the first one)- I got stuck finding the thrid gemy thing. Or maybe it was a rock… ANYWAY it’s at the lake. and i need the armor, to go underwater. So i talk to my buddy jon and he explains it all to me, and i try to do it… then he explains to me that i have to be big, then he says go under the waterfall. WELL let me tell you, THE CURENT IS TO STRONG TO GET UNDER THE WATERFALL!  this is when the game died, yes it’s dead to me now. DONT go play it! 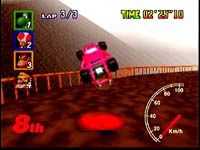 7.  Mario Kart 64 (N64)- This game is kick ass, the fact that it has not levels, no story line, and just good clean fun gives you no oppertuity to get confused and fail without a dignified loss. If you lose in this game you know you lose. IT’s a great amazeing thing.

6. Mario Party (N64)- Nother harmless game. Friendly long drawn out compition between you and a hord of close friends, and maybe the occational computer players. But the computer players cheat. They always are better then you at the games, no matter how hard you try! It’s horrible it’s like they set out to bring down you gameing esteem! Horrible.

5. NHL’94 (NES?)- I hate this game alot. Hockey confuses me enough on it’s own, but then put it in game form and im spent. I can’t even keep my player in the screen, BUT this game has a kick ass soundtrack. The fact that me and paul sat for about an hour playing… cards (poker) listening to the soundtrack and it still entertained us. WOw that soundtrack is amazeing.

4. Devil May Cry (playstation 2?)- I’ve never ACTUALY played this game. But i watched jon play it. And it made me laugh cause the skulls flew at him. WHOOOO. it was funny. ANd also it was cool how when the guy ran his shadow had wings. I didn’t like how there was no background of who the charater was. Well maybe, but jon didn’t pay attention when he first started playing it and therefore couldn’t tell me. *sigh*

3. The Game that I played as a Panda (playstation2)- If you were there you know what im talking about. If not, your just as lost as I am. All i know is the little panda in the big pandas pouch rubbing him up… was well worth the money paid to get the game. THe seriousness of a panda sliceing up  skelletons made my sides split. SAddly i had to leave to get pizza. I haven’t seen the game since, but days are to come… maybe me and my panda hero will meet again.

2. THE BOUNCER (playstation2)-  Mutiplayer fights and VOLT KRUGER…. need I say more? Fine fine fine. It’s a compleately amazeing game within second of turning it on I was amused beyond my wildest dreams. The fact that it is about a Bouncer but no “bounceing” actualy takes place sorta upsets me but what else are ya gonna do?

1. The Dreamcast Demo Disk (dreamcast)- This game provides hours of entertainment on all sorts of types.  You can watch little movies, play all sorts of entertaining and challengeing games. I just can’t figure out how to beat it. i mean i’ve done everything in the game… i’m so lost  to how to beat it stilll. One day i will learn and be victorious.