Japanese Pop Band That You Can Listen to While Playing Games With Crappy Soundtracks of the Month:
Puffy AmiYumi 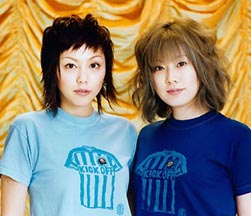 Now, I’m sure everyone reading this has already heard about Puffy AmiYumi (they are simply called Puffy in Japan, but since some cheesy rapper already sort of had that name here, at one point as in, doesn’t have anymore but they still can’t call themselves it… whatever… they are called Puffy AmiYumi here) because they are uber famous and amazing. For the three or seven people who haven’t heard of them, they are the greatest thing since sliced bread. I mean it. If I had to choose between listening to them and having sliced bread I’d be like “hand me a dinner roll, it’s Puffy time!!” Of course, not being able to speak Japanese I can only understand a few choice words of any of their songs. Those being the English words they use. That’s right, folks, some of there songs are in English. They have a whole bunch of CDs, though only around four or so have been released in the U.S. so far. They can also be seen on Cartoon Network on the show Hi Hi Puffy AmiYumi, and can be heard performing the theme song to Teen Titans, also on Cartoon Network. The main point of this whole article is that you should be listening to them while playing video games with crappy soundtracks. Their music is upbeat and energetic and perfect for most any type of game… except games that are meant to be down and boring… but you really shouldn’t be playing those, anyway. I have personally played video games with their music playing, so I can say for sure that it is safe and enjoyable for all ages. Captain Matt’s Super Thumb says… Thumbs up to Puffy AmiYumi!!

I saw a sign for Wii Sports Resort the other day that says it is a totally awesome game that comes with TWELVE different sports everyone totally wants to play. The store didn't have a playable demo o