The war between the states. Brother against brother. The battle to end slavery. If ever there was a formative conflict in US history, it’s the Civil War. Heck, down here in Georgia, I have neighbors who still insist that the South won the war, or at least should have.

Oddly, not everyone is familiar with the Civil War, or as my racist neighbor calls it, the War of Northern Aggression. Luckily, Infogrames is here to teach us all about the Civil War in a terribly non-innovative, short game called North & South. 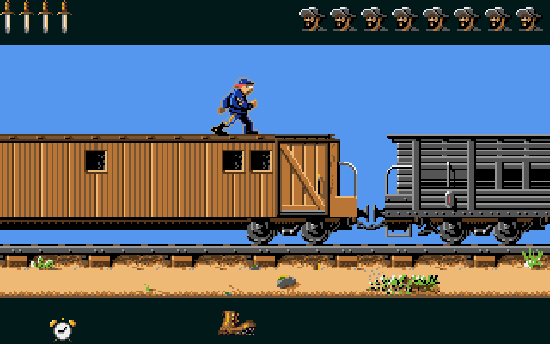 In North & South, not only are you given the option of playing as the Union or the Confederacy, you are also able choose the year of the war in which you start, as well as options such as bad weather, help from the UK, and whether or not you have to worry about Native Americans (you know, those people that your history course would cover more extensively if they had white skin).

The only difference between each year in which you choose to begin is the amount of captured territory and the number of armies that each side has. Since there’s only a total of 25 territories, and you start with between two and four armies, it makes for a very short game. Anyone who plays North & South and takes more than six turns to win—or worse yet, anyone who actually loses—is most likely not a human, but an evil, yet devastatingly brain-damaged orangutan, who should probably stay away from my Nintendo Entertainment System.

The extent of gameplay comes down three modes of play. One is the large map where you move your armies, and choose whether or not to attack an army form the other side. Then there’s the battle scene, where you have to switch between cannons, horseback, and armed soldiers on foot when attacking your rivals. This mode is pretty easy to get the hang of, and becomes boring after only a few tries. The third and final mode of gameplay is a sidescroller that you enter whenever you either invade or defend a fort or money train. Basically, if you’re invading, you must get to the end of the level before time runs out. If you’re defending, you have to keep your opponent form getting to the end before the time runs out. This mode is the closest thing to difficulty that North & South has to offer, so it makes sense that neither invading nor defending is necessary for winning the game.

Infogrames wasted very little time trying to implement much sound for the game. All you get is a variety of beeps to simulate such actions of firing a gun and dying, as well as short MIDI renditions of “Yankee Doodle” and the “Dixie” song, whose actual name I can’t be bothered to look up.

Even if you happen to be high, drunk, or a combination of the two, North & South really isn’t a game that will hold your interest for longer than a commercial break, which incidentally, is about how long it took me to write this review.

Now I’m sure some of you are thinking—well, at least the two of you who are actually reading this—that I didn’t put much effort into this review. And the fact of the matter is, I didn’t. But that’s because I wanted to reflect the amount of effort that was put into making North & South.