After such OVERWHELMING love of last month’s BRAND NEW style of THE THUMBS, it has been brought back for more. OK, well, maybe the love wasn’t overwhelming; but, since I know it will BECOME so, there’s no need to stop this PURE ESSENCE OF AMAZINGMENT just yet.

So, this month I bring you a batch of games from the future so amazing that just may leave you stunned, wondering…”Oh my God.. what in the world is happening to the videogame industry’s future!” 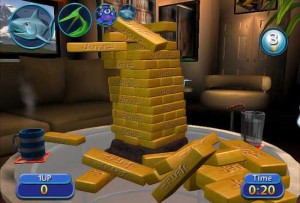 to a videogame form,they usually come to one of two conclusions. Obviously, Jenga is one of those conclusions. Many anights I find myself alone in my room with my trustyJenga set just wishing I could play it on a more digital level. Thankfully, due to my PSYHIC POWA, and Atari, that dream became a reality.

So everyone knows the one true downfall of Jenga. The one, if any, reason why someone would turn down the chance to play this game. Yes, I am talking about SPLINTERS. Splinters! NASTY, NASTY Splinters, but FEAR NOT! This videogame is SPLINTER FREE! WOW. I am not quite sure how they were able to engineer such perfection; but they did. A flawless reproduction of THE Jenga with absolutely NO splinters! How can you go wrong. Every true gamer out there is salivating over the release of this game. As they should be, because YES: It IS as good as it sounds

Nothing pleases me more than destroying humans. That is just the kind of person I am. Humans? Who needs ’em! Thankfully, the Destroy all Humans series allows me indulge in this love in a very not-illegal form. Another pleasant surprise in this game was the variety of humans it allows you to destroy! Those annoying anchors on the local news stations? DESTROYED! That Jared freak from the Subway commercials? Destroyed! The crack who played Spiderman in those God-awful movies?? Destroyed! Ben Affleck, Nick Cage? Oh, you know it. In fact, this game does away with the entire “plot” or “storyline” business and just has you destroy annoying bitches like those named. Best game EVA?? Yup.

Remember how EVERYBODY just knows that Jenga BELONGS on a console? Well, the other thing that we all KNOW is that coloring books are soooo last century. I mean, who wants to touch paper, or colored wax for that matter! But a DS? Now that is a proper coloring tool! Plus, you can do it in the middle of the work day and NOT have to play someone’s kid for it! BRILLIANT!

So, this game is EVERYTHING that you would expect and nothing more. Balls-to-wall coloring ADVENTURES. You wanna color a turtle shell?? Done. A frog? Done. Some other generic thing featured in coloring books worldwide?? DONE! What’s that? You want MORE than just coloring?? HA! I knew you didn’t. Who would want that when you can have just color. Look, everybody knows kids today aren’t about the sunlight or the outdoors. They are all about the videogames. Thankfully, this new generation will not go without coloring. Bravo, Crayola Treasure Adventures. Bravo. 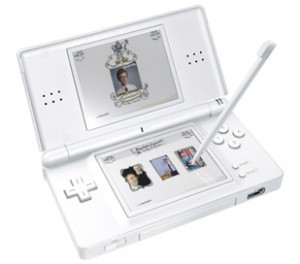 crap. Let me tell you, then, that this game will NOT disappoint you! It really is a shame that console games don’t come in boxes,because at least I would have had some fun playing with that. Plus, I bet it could hold some really nifty stuff for when I wanna impress all those Napoleon Dynamite fans!

The strange thing about this game is that, for the first time, ever I am pretty sure they forgot to add gameplay to a game. I mean, they got the name, the license, and all those snazzy pictures of everyone’s favorite characters. Also, I found a lot of those annoying games people e-mail me that cause me to severe all ties with them, but no actually gameplay. Now, maybe I just didn’t go deep enough into the future and get a proper read of this game…or MAYBE it’s just a Napoleon Dynamite product! ZING!

If there is one thing us gamers hate more than sunlight, it has got to be working out! What the hell is that crap! If God wanted me working out, he wouldn’t have created chairs, OK?? However, these Wii people keep trying to trick me into doing that stuff. BASTARDS. Hey, Nintendo, maybe I like being a

immobile shut-in! Ever think of that! Sadly, no, Nintendo does not care about what I WANT and keeps pumping out these strange, strange games that require action. They also have the NERVE to make them fun and entertaining.

Thankfully, for me there is Wii Fit, which kills all that and gives me hope for a move back to the good days before DDR, when I could just sit and play games with no motion whatsoever. Wii Fit combines various things that you may do if you wanted to…well…keep fit. You know those boring videos you see in the video store? Yeah, the boring videos, not those fun ones. Well, this game had a lot of the boring and none of the fun. Where was the kickboxing! Or the Ultimate Ball Smashing games? Hmm! Yes, that’s right, this game IS not Wii Sports. And we all know that any Wii game that isn’t Wii Sports just isn’t worth trying.

Is it blown? YOUR MIND! Is it blown?? I thought so. That’s just what happens when someone stumbles upon the GREATNESS that is the THUMBS. One read, and you’re never the same again. Your total outlook on life, your perspective of reality…IN SHAMBLES! It is like being born into an entire new world, and yes…you’re welcome. Be sure to come back next month for more reality-altering scribblings!

A new way for the world to experience micro-transactions!