Welcome, one and all, BACK to Versus Mode—the column that calls upon GameCola writers as well as denizens of the videogame world at large to talk about what’s up in gaming.

Christian Porter is a current GameCola staff writer known his reviews as well as for Top of the Heap, a monthly column that looks at uncommon threads among varied videogames. This is Christian’s third appearance in Versus Mode, having written previously with Danielle Symonds-Yemm and Michael Gray.

Paul Franzen is the Editor-in-Chief of GameCola. In addition to editing every word you see here and running just about every facet of this ‘zine, Paul writes reviews as well as The Gates of Life , a choose-your-own-adventure-esque fantasy adventure thriller (every other month); Digital Championship Wrestling, which pits videogame character versus videogame character in pro-wrestling bouts; and Dear Readers. This is Paul’s third appearance in Versus Mode, having written previously with Casey Levine and Neal Iannone.

1. Retailers oughta be fined for selling “violent” games to minors.

Game stores (and video stores/movie theaters, for that matter) should not have the burden of parenting your children placed upon them.  If your kid somehow comes home with a videogame, DVD, book, magazine, or anything else that has content that you don’t feel they should be seeing, it’s your business if you want to take it away from them. Don’t try to legislate against my kid just because your kid is too busy drooling to see the difference between reality and fiction and you can’t be bothered to parent it.

Paul: See, here’s my thing. As a 22 year old, I don’t really care if 15 year olds are allowed to get their rated M for mature on. Way, way back when I was that age, I’m sure I would’ve found this outrageous; and, really, I doubt that anything’s gonna go foul for them if they play Super Gut Blasters from Planet Nudity; but if their parents don’t want them playing, then I’m cool with having the safeguard in place to keep them away. It’s the same thing as carding people at the movies, and I don’t have much of a problem with that, either. It’s a shame that the retailers would get punished for the potentially wrongful acts of punk kids, but what are the other options?

Plus, if we’ve got laws like this on paper, then it gives parent groups less to harass us about. And it’s way better than outright outlawing violent games from existence, which is what such groups would probably prefer. Way to go, compromises!

2. Game companies should refrain from taking down the servers for their online games.

Christian: I’m not going to sit here and tell EA that they can’t do whatever they want with their servers.  I will, however, say that killing the servers on games that have yet to even celebrate their first birthday is a great way to say, very loudly:

We aren’t in this for the long haul and we don’t care about the money you wasted on our now worthless product.

It’s very clear that EA doesn’t care about you if you aren’t buying the newest version of their games.  They don’t want Madden players, they want Madden subscribers.

Paul: Totally lame. Why should I ever purchase an online-only game, now? I’m not going to spend any money at all on a title that’ll expire in a few years. Maybe they, the companies, could host the games on one big server that’ll never die; or, they could downsize specific game servers to ease their cost burden. But outright killing off the servers? Totally lame.

3. There’s something seriously creepy about a cartoon that stars a preteen Lara Croft. 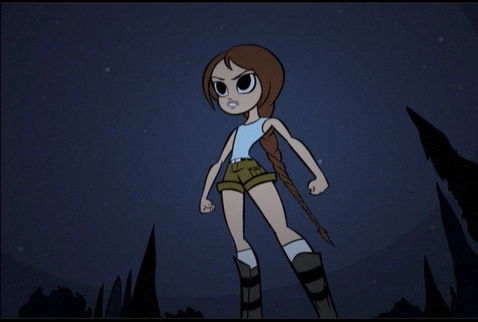 Paul: Who? Oh, she’s from that game. Well, so long as she’s not portrayed as sexy in the show, then I guess it’s OK. When’s the last time that any sort of videogame cartoon actually worked?

4. I wouldn’t buy a game if it was only available at Wal-Mart.

Christian: I don’t know what peoples’ obsession with hating Wal-Mart is.  They’re a store, and they have some stuff there for some reasonably low prices.  If I want to buy a game and it’s only available at Wal-Mart, then I may not like the lack of choice I’ve been presented with, but, what the hell, I’ll still go pick it up if I’ve got to have it.  I’d buy the hell out of games like Mother 3 no matter where it was being sold.

Paul: Sorry, I’m not one of those people. Wal-Mart’s totally cool with me. Always low prices, am I right? And there’s one right near my new apartment, so I’m sure I’ll be picking up this new Chibi Robo game there at some point.

5. If a game’s available for both Xbox 360 and PS3, it doesn’t matter which version you buy.

Christian: In a perfect world, this would be the case, but game companies have deadlines to meet, and, if one system takes more time to put a game out for than the other, then, unfortunately, it’s going to have some features cut.  In the case of Madden, even EA admitted that they have more experience programming for the 360, and the PS3 version suffered for it.

Also, sometimes, I’ll choose which system to buy a game for based on which controller I like using the most.  Last generation, if a game came out for PS2, Xbox, and GameCube, I’d always pick the PS2 or Xbox version because I hate the GameCube controller.

Most of the time, games on more than one console will be nearly identical, but there are the occasional few in which there is a clearly superior version. It’s a $50 or $60 dollar investment, so it’s best to read into it and see if there’s a better version that you should be picking up before putting down that kind of scratch.

Paul: So I’ve totally made videogame purchasing decisions based which controller I wanted to use the most. Bought Sims for the Xbox ’cause the version I’d played before was on the Xbox, so I was most familiar with it. Bought some Ninja Turtles game for the GameCube because…I forget why, but it had something to do with something. But this? Come on. It’s saying that one version is better than the other ’cause its cut-scenes are prettier. That’s hardly a dealmaker. Oh, and one version has half-second delays. Half-second delays? I’m supposed to buy the game for that system over this because I have to wait for an entire half-second longer to do something? Do we no longer have any concept at all of what hinders a playing experience? Man, thanks for the sound advice, USA Today. There is, generally speaking, nothing technically different in an important way between two versions of the same game.