Welcome, one and all, BACK to Versus Mode—the column that calls upon GameCola writers as well as denizens of the videogame world at large to talk about what’s up in gaming.

Britney Brimhall is the Chairman and CEO of Himalaya Studios, which most recently developed and published the PC point-and-click adventure game Al Emmo and the Lost Dutchman’s Mine. She is currently working with her team at Anonymous Game Developers Interactive to release a remake of the Sierra classic Quest for Glory II. The game is nearing completion and will be available soon at www.agdinteractive.com. This is Britney’s first appearance in Versus Mode.

Britney and Himalaya Studios are always looking for fans’ opinions on what they’d like to see next from the company. To offer up your own input, visit their forums here.

Christian Porter is a current GameCola staff writer known his reviews as well as for Top of the Heap, a monthly column that looks at uncommon threads among varied videogames. This is Christian’s fourth appearance in Versus Mode, having written previously with Danielle Symonds-Yemm, Michael Gray, and Paul Franzen.

1. Videogames are better at being scary than movies.

Britney: I don’t think one medium is necessarily better at being scary than another—it depends on the specific movie or game. I think any form of entertainment that can draw in a viewer with the right 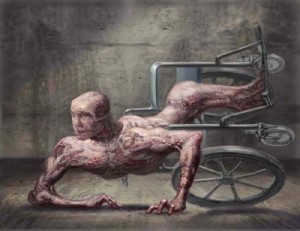 combination of creepy ambiance and intense suspense can create a scary experience that is memorable.

My friend and I used to have to play Quest for Glory IV: Shadows of Darkness with the lights on to calm our nerves, and I literally jumped out of my chair at the end of King’s Quest II VGA when the dwarf suddenly entered the screen. And I also had to take “scare breaks” from Silence of the Lambs and literally jumped from my seat during the newest Halloween. Whether it a game, movie, or real-life, scary is scary!

Christian: Films have had over 100 years to churn out some real scarefests, so they definitely win in the quantity department.  Hell, when it comes right down to it, there’s more quality horror titles in the film world, too.  Where videogames beat films is interactivity.  In Night of the Living Dead, I fear for the people trying to not get eaten by zombies.  In Resident Evil 4, I fear for myself through Leon.

Britney: I am happy that my boyfriend bought the PS3. I can use all its features when I’m visiting him without paying the hefty price tag for the additional capabilities that many gamers are not interested in. He may be in debt now, but damn it, those really crisp movies are worth it!

I just asked my boyfriend, who is a hardcore gamer, for his take on this question. He said that the PS3 is a great option for people who don’t have a lot of money, love games, and also want additional devices like a DVD player. He said he could care less about the other features—but is certain somebody out there does. We’re just not sure who.

Christian: My videogame system should put games first.  Once it’s perfected the ability to be a great videogame system, I certainly wouldn’t frown upon it having other features, as well.  Though it isn’t a standard feature and requires some hacking to get it in place, Xbox Media Center is one of the more feature-rich media players around.  Making a system like that standard on a videogame system is a nice addition.

3. Using the videogame America’s Army to recruit soldiers is wrong.

Britney: I think that using America’s Army to recruit soldiers is a sound concept. Such games teach strategy, teamwork, and how to dissociate from and become somewhat desensitized to your environment, and they improve reflexes. So not only does the game possibly inspire people to join the Army, it’s teaching them valuable skills for the battlefield. Some of the best players I know are military men, making me believe that there is some correlation between excelling at the game and thriving in the Army. I don’t know if it’s fair to call a game like this simply entertainment—it’s more of a simulation.I think it can be a valuable training tool and can introduce those who would thrive in a military environment to a new and potentially promising career choice.

Also, I really can’t fault the Army’s marketing efforts. If they are searching for young men and women with both quick minds and trigger fingers, the gaming market provides a lot of great candidates to choose from.

Christian: I don’t know that it’s wrong, but it’s certainly misleading to present actual war as a game.  On the other hand, I can’t really feel much pity for the dullard that joins the Army expecting to be Master Chief and ends up finding out that real war isn’t nearly as fun as a videogame, there’s no extra lives, and your enemies aren’t aliens.

4. M-rated videogames are inherently better than others.

Britney: It’s hard to argue against factual evidence. Perhaps it’s time to remake our last game with blood, violence, and an additional hospitality house (which I will refer to as a whore house from now on)…or perhaps not.

Christian: I think more mature games are getting higher scores from game reviewers simply because the videogame market isn’t what it used to be.  Back in the NES days, there were strict rules put in place by Nintendo to keep excessive violence, adult themes, or any other questionable content out of their games.  The reason was simple—they perceived their audience as being males aged around 9 to16.  The market is now such that game developers understand that their target audience is males aged 18 to 26.  That being the case, developers are pouring their resources into new, well-made games for adults (Bioshock, Oblivion, Halo) and skimping on the kids game market (Hannah Montana, Grim Adventures of Billy and Mandy, Happy Feet).

5. The Wii Zapper looks way too much like a real gun to be allowed.

Britney: Kids are on a learning continuum, starting out knowing very little and becoming more experienced as they approach adulthood. There is a lot of stuff they need to pick up on before they leave their sheltered home lives. I think parents need to be realistic and allow their children to experience things—within certain limits, of course.

As for the Wii Zapper, last I checked, it didn’t come with bullets. The thing is, we live in a world with guns. Guns can provide protection, entertainment, and a hobby, and they can kill. Kids should understand what weapons are and the risks that are involved in using them so that they can make wise decisions based on this knowledge. I think we should respect kids, educate them, and guide them—not control them. When you hold the reins too tight, you risk psychologically destroying a child, thereby creating a potential danger to society who wants to shoot all his or her classmates—which is the very problem many parents are trying to prevent in the first place!

In the 50s, kids had barrels upon barrels of toy guns that looked like real guns (none of these bright orange painted pieces of crap) and shot caps to make them sound real, too.  Nobody cared.

In the 80s, we had the Nintendo Zapper: a gun-shaped toy used to shoot ducks, criminals, and enemy soldiers on the NES.  Nobody cared.

Today, Nintendo plans to release something that resembles a cumbersome wood planer that kids point at a screen to play a videogame on the Wii, and New Jersey shits its pants in terror.

I assure you, New Jersey, that kids did not devolve into a bunch of drooling mongoloids devoid of all common sense over the past 40 years.  Kids understand that videogames are purely fictional, and if they don’t, then you’re a candidate for the World’s Most Ineffective Parent.  And speaking of parenting, if you actually have such little faith in your children that you think letting them play with this toy will turn them into homicidal maniacs, then you can go right ahead and do this thing that’s sweeping the nation—it’s called parenting.  Tell your kids that they can’t have it; don’t try to take it away from the rest of the world.

Audience: And so, the group decided to take the tram to Strategy Guideland, where they would surely find some hints as to how to reach the final boss who obviously prevented them from saving the world ...