I remember the first time I played Scene It?: Lights, Camera, Action. I didn’t think it was going to be any good, but I gave it a shot, anyway. It stars me, after all, and he’s definitely one of my favorite videogame characters. I loved him in Wii Sports. I used to play that game all the time with my older brother, and we had lots of great times together doing so. I didn’t really like him so much in Wii Play, though. I was glad to see that he was in this game, but it didn’t look like a standard Scene It? game, so I didn’t think it would be any good. But I bought it anyway, and I’m glad I did, because it turned out to be a really great game. I saw it at the store, and I bought it. With my own money. Then I took it home and played it.

Zach Rich: Destroying the integrity of GameCola, one copy/paste at a time.

Jokes annoying my editor aside, Scene It: LCR is an installment in the DVD-based trivia series in which people test their knowledge of movies, TV, Nickelodeon, Harry Potter, Friends, James Bond, 12th-century England, and other fun topics of note. The newest edition throws the game board aside in favor of a point-based system, using, quite likely, the greatest controller ever conceived by man. Yes, I believe the big button controller to be THAT good. I mean, look at it: 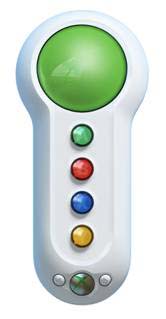 This is, easily, the most gamer-friendly controller anyone could ever think of. I’m willing to bet it even popped into Stephen Hawking’s mind when he wasn’t thinking about Black Hole Singularities and that other posh those wheelchair-bound wonderchildren of science think of. Although you can play a game of LCR with a normal 360 controller, you really shouldn’t. The controllers are free with the game, after all. And they’re just too cool. The controller also has full compatibility with the X-Box Guide during gameplay. Don’t worry; you can still view your pretty little achievements in the middle of the game.

Gameplay in Scene It works a little different than on the DVD version you either love or hate. LCR uses a points-based system. Answer a question, you get points. Whoever has the most points at the end wins. Each question is worth 2000 points, but that score decreases over time. Simple, right? Well, that’s because it is. This is a trivia game, after all. You won’t be seeing any Mario Party-esque minigames in here. It’s all about the questions, and the movies. 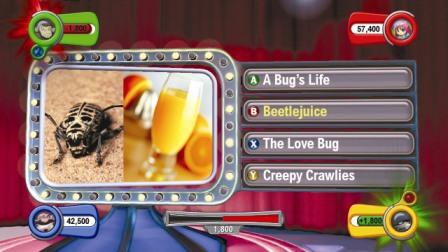 In retrospect, all four of those gamer pictures are totally overused. Get some spice in your life, will you!? Download new pictures, TODAY!

There’s two modes of play in LCR: Short Play, and Long Play. The only difference is in the names. A short game has three rounds of three puzzle types, and a long game has three rounds of five puzzle types. There’s no way to choose what type of puzzles you want to play; it’s all randomized for your pleasure/displeasure. If you don’t feel like playing the whole thing, the “Party Play” feature doesn’t keep track of score, and simply lets you play the game without fear of competition, which I find extremely boring. Oh, did I mention you can look at your achievements, too?

Luckily, there are a ton of different puzzle types. The 21 puzzle types are of a good variety, and offer different challenges. One that appears in just about every round is the Movie Clips puzzle, in which you watch a short clip from a movie, then answer a set of questions either about the clip, the movie, or an actor in the movie. The movie clips, while not in HD, are plentiful, with scenes from movies like King Kong, Shrek, X-Files: Fight the Future, Animal House, Planes, Trains & Automobiles, and other classic movies. My guess is that they wanted to save space for more clips by not offering HD content, which is completely understandable. Since this game is aimed at a casual audience, those who play it probably won’t be able to tell the difference. 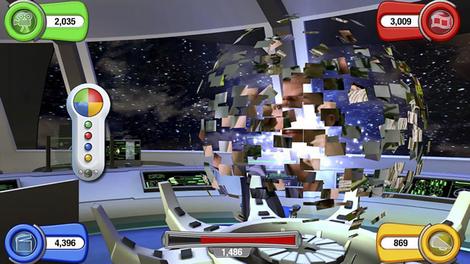 Lucas? Is that you?! Oh, tell me how rad the Power Glove is!

The rest of the puzzles are hit and miss, depending on how into movies you are. Puzzles that ask you to name actors based on their credentials might excite the movie buff, while puzzles giving a famous movie quote and asking you to finish the quote could be answered by anyone who loves the movie enough. I do suggest that you don’t finish the line “I don’t know (how to quit you),” because then people might begin to question your masculinity. I am a sad victim of knowing the answer to a BrokebackMountain question. Other puzzle types feature blurred images where you must guess the actor or movie, quizzes on pop culture, and knowledge of just how awesome some movie posters really were.

When a round ends, your points are totaled up, and then bonus points are awarded to players who are really awesome, or really, really suck at this game. You’ll be granted bonus points for things like having the fastest answer, the most correct answers, getting every question in a block right, or answering a question after someone gets it wrong. You’ll also get points for having the slowest answer, the most wrong answers, the quickest wrong answer, and your painfully low IQ. Since it’s a party game, my guess is that getting points for sucking is there for the laugh and to not make anyone feel bad about getting the retard award, but come on. It’s like those Lifetime Activity Days I had to go through in elementary school where everyone got a ribbon just for being there, but the big kids that won all of the games got nothing special. I’m not sure where I’m going with that tangent anymore, but I needed to vent about my childhood for a sec.

The only major change that happens after Round 1 is that you lose points for wrong answers, which makes sense. It prevents that asshole in the back corner of the room from answering every question with a Will Ferrell answer with said choice, and expect to win. Then again, he likely doesn’t want to win if he’s to be a true asshole like the bastard is. Don’t invite him to parties anymore. 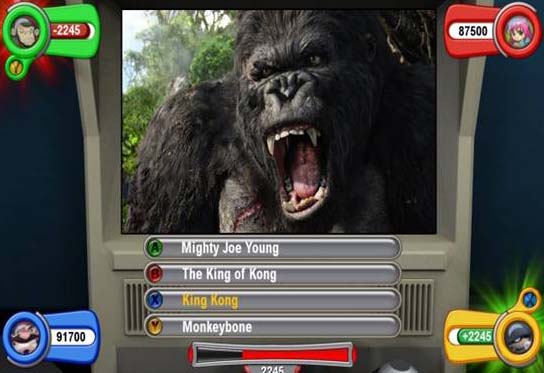 The presentation of LCR is a mixed bag. The characters and settings you see in little vignettes before puzzles look like rejects from an already low-budget XBLA game (3D ULTRA MINIGOLF ADVENTURES, I’M LOOKING AT YOU). I can only watch this guy make the same shadow puppet on the movie screen so many times, and there’s no way at all to skip it. A part of the game has you try to guess movie titles out of pictures drawn by five year olds, which can end up being one of the funniest parts of the game, when the drawings are from movies like Edward Scissorhands, Alien, or Saving Private Ryan. Those blood stains are so cute. Audio-wise, there’s nothing memorable here outside of movie soundbites. The announcer is annoying and as repetitive as all hell. He only has one introductory praise per puzzle (“HAHA, WHAT WAS I JUST TALKING ABOUT AGAIN?”), and a few insults to players performing badly that could give a chuckle the first time you hear them, but soon you’ll wish you could just skip the sour, discolored frosting and sink your teeth into that wonderful trivia cake.

At the end of the day, the amount of fun you’re going to get out of Scene It? comes from the people you’re going to play with. Like all party games, the game is a complete bore alone, and should only be played alone if you’re either trying to get every achievement the game has to offer, (me) or you’re trying to write a somewhat fingerquotes “wacky” review of it (also me). If your party has grown bored of countless Mario Parties, Rock Bands, Mario Karts, and Haloz, you can have an awesome time with this game, if you have the right people around you. Mind you, for what the game offers, it delivers, and it delivers everything you should expect, and nothing more. The game saves all seen questions to your gamer profile, and with 1,800 questions, the chances of seeing a repeat should be quite slim for a while. And while the tease of DLC for the game lingers, at press time the game will have been out for five months, and not a scrap of content for the game has been made available. Sad, but true. Lights, Camera, Action is a fun party game, as long as you and your friends are into the subject material. And that’s the jist of it. 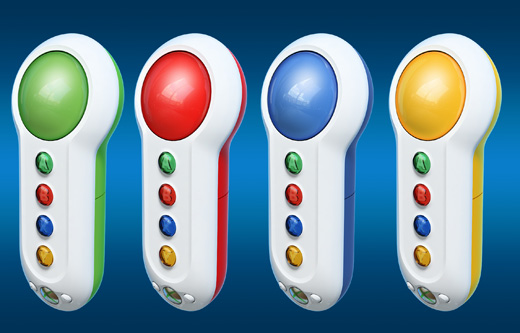 Though you should really be getting it just so you can hold these in your hand. Forever.