“Hi! My name’s Guybrush Threepwood, and I want to be a pirate!”

And with that, a legend was born.

Well, actually, if you ask me, the legend was born when that simply amazing theme tune kicks in when you first start the game up, but most people would quote the above line when the topic of The Secret of Monkey Island arises. 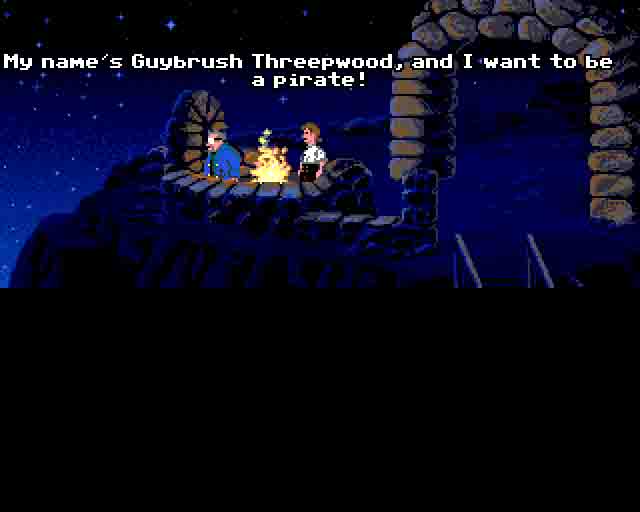 LucasArts, or, more specifically Ron Gilbert, came up with the idea for the game after riding the Pirates of the Caribbean ride in Universal Studios. A game where you could be the pirate, but with a twist. Sid Meier’s Pirates! had conjured up a very realistic representation of what life on the Seven Seas as a pirate would have been like. MI, on the other hand, threw the book on pirates out the window. Here we have pirates who don’t just sword fight—they consider the winner of the clash to be the one who comes up with the wittiest insults. We don’t have a main hero who is tough, a hit with the ladies, and willing to stand up to any man; instead, we have  a nervous weakling who handles his weapon like a feather duster and has, as a duel-hooked pirate would have you believe, a joke of a ponytail. Guybrush Threepwood is you and I. The common man. The man who wants the world but hasn’t a clue on how to get it.

The game built upon the success of Maniac Mansion, Zak McCracken and the Alien Mind-Benders as well as Loom (which has a couple of in-game jokes here) by retaining use of the then infallible SCUMM engine. The SCUMM engine was a simple interface that was a huge upgrade from the days of text adventures. Instead of having to type in directions  and actions very specifically, you simply clicked the action you wanted to do, and then clicked within the window above it in the hope that it would make a successful move take place. And nothing is more satisfying in this game then spending ages trying to figure out the right way to complete a puzzle only to go out on a whim, try something a little crazy and find that it actually works.

And believe me, this game can be hard. Though it might look like a cute colorful piratey adventure, some of the puzzles in this game are unforgiving. I can’t count how many hours I spent trying to get past those bloody dogs at the Governor’s mansion, not realizing that all I had to do was just go to this location, pick up this item, mix it with this other item, and give it to the pooches. Sounds simple, but a lot of these puzzles don’t work as logically as you’d expect them to in real life.

And that’s one of the beauties of this game: It really gets you thinking. Not thinking like filling out a crossword puzzle thinking, but really wracking your brains trying to figure out the logic of whether or not a sheet of dance instructions really can have anything to do with a treasure hunt.

Yet you’ll start letting yourself get sucked into the game, and, after a while, they’ll no longer seem like dance instructions, but you’ll begin to look through them and then there’s that moment I mentioned before when the light bulb pops up above your head and you say out loud, “Ahhhhhh…so THAT’S what it’s all about!!!”

It’s hard to explain the puzzles of MI without spoiling the game for any first-time players, but you’ll enjoy them. They’re fun. They never get too stressful (despite the fact that I was convinced for ages that the troll surely wanted the meat somehow), and you do feel a great sense of achievement when you complete them with help from nobody or nothing. But playing the game with someone else who’s also a first-timer is just as fun. Work together and put your heads side by side in trying to figure out how exactly you break Otis out of jail, how you reply to ‘You fight like a dairy farmer!’ and what exactly IS the secret of Monkey Island….

The game is a beauty. Sure, it’s not a patch on today’s games, but for it’s time it’s supremely detailed. The characters each have their own look and feel about them, which makes them all feel very individual, and the SCUMM engine paired with the graphical window above means that there’s no time when you’ll ever need anything else. Simple, yet satisfying. No menus, no pause buttons to take you to another screen, no separate map windows to bring up when you feel lost, no inventory windows hidden away elsewhere in the game. It’s all there for the taking, up close and personal, and it means you can focus on the game and its magnificent story without any interruptions.

The story itself is a marvelous tale of one man’s journey to become a pirate. Or, in this case, some kind of bastard offspring of a pirate. Guybrush Threepwood is a sarcastic son of a bitch at times, but you’ll never hate him. You know he’s the underdog throughout, and that’s why you’ll panic to get him out of the water when he’s drowning, especially before 10 minutes are up. His relationship with the Governor, Elaine Marley, is never really fleshed out in this outing—that was all really left for the sequel— but there’s still an interesting triangle between him, Marley, and the ghost pirate LeChuck. LeChuck, the evilest and most reviled ghost pirate on the Seven Seas. The bad guy who you’ll love to hate. But again, even LeChuck doesn’t come into his own as much here as he does in the sequel, so it’s for this reason that you’ll be following Guybrush through the whole of this game. Not because he’s the character you play, but just because the other characters aren’t developed as well.

We have already established that this isn’t your typical pirate storyline, and the dialogue goes with that flow, too. References to other LucasArts games are thrown in for good measure, Guybrush often says things that shatter the fourth wall, and the phrases thrown around during insult sword fighting have to be seen to believed. It follows the traditions of previous LucasArts games, where the serious dialogue’s there for you to follow the storyline onwards, but there are so many throwaway comments included so that, if you need it, a jolly good old laugh can be had by all—people playing as well as any spectators.

Audio doesn’t play too important a part in MI, gameplay-wise. You could play the whole thing through start to finish with no sound and still be able to complete it, but the music really helps the atmosphere, that’s for sure. You walk around the island map screen and a little ditty plays out that makes you feel full of wonder about what’s hidden to be found on Melee Island. You get onto Monkey Island itself and the tune helps make you realize that the game means business now, and if you thought it was tough before, it’s only going to get tougher. And did I mention that MI has the greatest opening theme tune in the history of gaming?

Sadly, as is the nature of this kind of game, once it’s completed, it’s over. No different playthroughs after completion, no various ways to complete puzzles. Just one of the greatest times you’ll ever experience while playing a videogame. I recommend giving it a few years before returning to Melee Island. It’ll be good to go back after all those years.

P.S. I plan on doing reviews for the foreseeable future on all of LucasArts’ point-and-click games, but I had to start off with the one where it began for me. I probably hadn’t even reached the age of 9 when I first encountered Guybrush Threepwood, but I fell in love with the gameplay, the music, the puzzles, and that sense of exploration you feel as you wander around the islands of Melee and Monkey. Needless to say, three sequels would follow, of which two I have completed (one I have still yet to…don’t ask); but, if it weren’t for MI1, I would likely have never played any other point-and-click game ever, and if you join me for the ride in the future, you’ll see exactly how good these gaming equivalents of cocaine can be.

Besides Labyrinth, I will be reviewing every other LucasArts game in chronological order, starting next month with Maniac Mansion. I haven’t decided yet whether to go with the original version or the remake, but, either way, my mission is to scream out to the public that these games were here, and even if the genre is not so prominent in today’s videogaming society, the classics will be here for years to come.

Carl Houghton is a former staff member from GameCola's early days as a monthly email newsletter.

Forget New Leaf—this movie is the real reason Animal Crossing is so popular!