Ahh, the great outdoors. Cub Scouts was a lot of fun for a young, beardless Mark Freedman. Great activities, nature hikes, chow lines. Cub Scouts taught me a lot about interacting with others and appreciating life. My first time away from home for a long time was hard on me, though. It was actually only a 3 night, 4 day trip, but I remember having a hard time coping with being away from home. I remember sitting at the dining hall, and I was in some trance. I was somehow whisked away back home, and then when someone came to say something to me, I was instantly teleported back to reality of Broad Creek camp.

For a moment, though—a brief moment—, I was back home, back in my basement. Back on the couch. Back in the world of Mana. Well, I was actually atop the Mana Fortress, right after a hard battle against the Dark Lich. A day before leaving for camp, my brother and I had finally made it to the final showdown against the Mana Beast. But, I couldn’t figure out how to beat him. He seemed invulnerable to my attacks. How can he be slain? Unfortunately, it would have to be put on hold. Perhaps contacting my spirit animal at Broad Creek would help shed some light on how to accomplish this task. 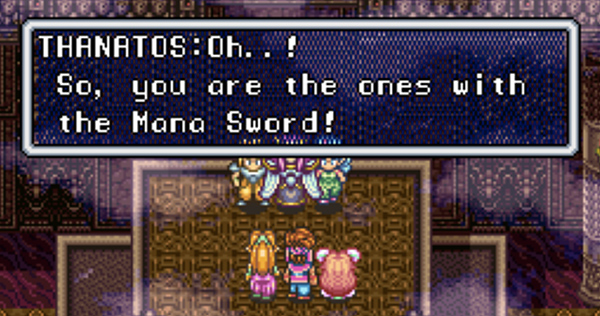 Unfortunately, what I had been told was a lie. There was no spirit animal communion that took place. What I did find, though, is some sagely camp counselors several years older than me. They were quite experienced in both the indoor and outdoor world. I found myself sitting beside a sagely, bearded counselor during an arts and crafts activity. Not being a particularly creative tyke, I decided to create a battle flag / banner for my favorite video game at the time (Chrono Trigger hadn’t come out yet). It wasn’t particularly…amazing. It was a green flag with some yellow letters on it that spelled out “Secret of Mana“, and a picture of the Mana Sword in all its glory.

The counselor, Buzzsaw, recognized what game I was showing off in the flag. He asked me how far I was in the game, and I told him how I couldn’t figure out how to defeat the boss. The sagely staffer then explained to me the key. You must cast the Girl’s and Sprite’s Dryad spell “Mana Sword” which gets unlocked when you defeat the Dark Lich. This awakens the Mana Sword’s final form, allowing you to do damage to the Mana Beast. It was so simple! The game informs you that the “The seal on Dryad’s ‘Mana’ magic is gone!”, but it wasn’t clear what that really did for me. It was up to you to figure out you had to cast both spells on the sword at the same time.

After bidding Buzzsaw farewell, I returned home. Returned to my basement. Returned to my Super Nintendo. Returned to my brother for co-op assistance. I explained the whispers I heard about double-casting the magic. We made our way up the roof of the Mana Fortress once again. I switched off the boy to the girl (named Butt) and cast the first Mana Sword spell. My brother, who always controlled the Sprite (named Hole) cast the second Mana Sword spell. Sure enough, a great flash of light and power swept over the fortress—the sword was unlocked! Finally, we had the necessary power to defeat the beast. After a long battle full of cure spells and weapon strikes, we finally did the beast in. The ending was quite emotional, both in the story that was told, and the long adventure I had been on, both in the outdoor and indoor world. It was a great ending to a great summer camp adventure and an all-around great moment in video game personal history.

You know, a funny thing happened to me on the way to the Internet the other day. Well, OK, you may not find it that hysterical, but it had me in stitches, slapping my own rear end from the hilarity of ...