Some of you may be familiar with Koji Igarashi’s work. For those who aren’t, he has worked on a ton of Castlevania titles, helping to create some of the best games in the series. And now he’s come to Kickstarter with a new idea. He’s come with a resurrection of the good, old sidescrolling Castlevania-style game.

Bloodstained: Ritual of the Night seems as though it will be a lofty undertaking. Igarashi promises a return to form and hopes to prove that the world does want the old-school sidescrolling Castlevania-style game. He has promised that the title will even be able to be played cooperatively and that there will be a Versus Mode as well so you can pit your customized heroes against each other in a true battle to the death.

So far, we have been presented with three main characters that players will be able to choose from. 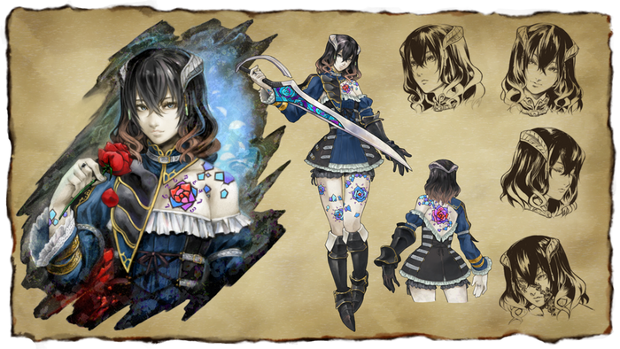 Miriam is the cover character and uses a longsword. It seems like she will be the most balanced character. Perhaps similar to Castlevania‘s Ecclesia? 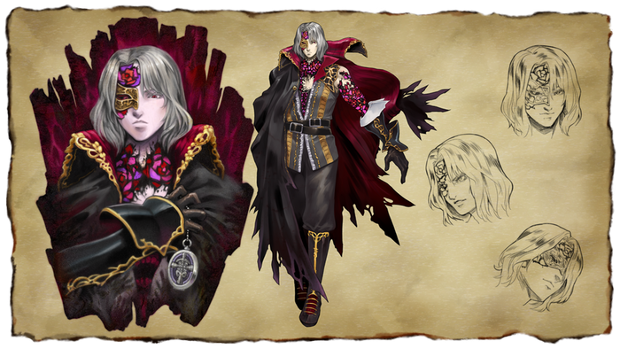 Gebel seems like he’s going to be the big bad guy, but we can play as him. His design makes me think he will be a spellcaster. If the $850,000 stretch goal is reached, he will be voiced by David Hayter of Metal Gear Solid fame. Johannes is the town alchemist. All we know about him for sure is that he is Gebel’s best friend. I hope he fights with bombs.

It seems as though, in addition to leveling up your character’s abilities, you will also be able to collect materials and craft new weapons through alchemy. There is very little information available on Bloodstained at this point, but I’d be lying if I said I wasn’t excited!

Bloodstained is also spicing up their campaign in a unique way. If people follow the title on social media, submit fanart, cosplay as characters from the game, and do other things to promote the title, Igarashi promises that these activities will alter the campaign and he will offer exclusive rewards to all of the backers. We have no idea what the rewards are, but it’s an interesting way to involve the community that I would like to see more Kickstarters use in the future.

Bloodstained: Ritual of the Night currently has no release date and will be available for PC, Mac, Linux, PS4, and Xbox One. If you would like to contribute towards the game’s development, you can back it through Kickstarter. Don’t worry about the game not hitting the $500,000 stretch goal; that happened almost immediately.

Second chance podcasts! In case you missed them the first time...