Rez HD is an enhanced remake of one of the many classics created for the ill-fated Dreamcast. It was originally released in Japan in 2001 and then ported to the PS2 for US and European audiences in 2002. In Rez, you take control of a hacker who’s out to prevent a supercomputer named Eden from shutting down completely. Apparently after reading I, Robot, Eden began feeling quite emo, questioning her existence, and entering a shutdown coma-ish state, which would likely cause quite a bit of trouble in a world where she controls fucking EVERYTHING.2 As the hacker, you must make your way through the network, destroying the firewalls and viruses that are trying to put Eden out of business forever. While I can’t imagine why anyone would want to destroy the one thing that keeps the world stable, I’m going to chalk this one up to the terrorists. In my mind, I’m George Winner Bush, and I’m stopping this cyber threat once and for all.

From the description above, you, being the uneducated vermin that you are, might assume that this is some kind of puzzle game. It’s not. It’s a rail shooter, and a damned good one at that. It’s simple: If there’s something on the screen, hold down the shoot button and lock onto it. You can lock onto up to eight baddies at once, and you can stay locked onto them as long as they’re in range. When you’ve got your prey locked on, release the button, and let the white bursts of light we call justice rain upon the viruses.

The thing you have to look out for is when the terrorists fight back. You can’t move your man, so you have to shoot down the missiles aimed for you before they hit, or otherwise you go down a character level. You can go up in level by collecting eight blue cubes, which allows you an extra hit and makes you look ultra badass—at least, as far as fighting wire-frames go.3 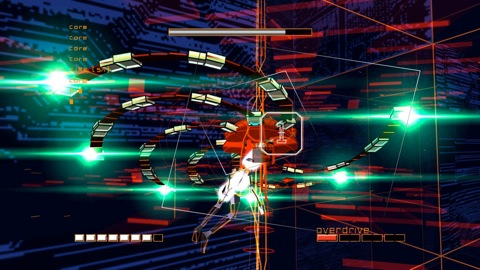 If this doesn’t stimulate your senses, you may not have a soul.

One of the things that made Rez so revolutionary for its time was how the music and sound were played out. As a stage begins, you have a simple beat playing in the background. As you play, shooting a glowing cube eight times will analyze a part of that stage and add more to the music and the visuals, until the end of the stage, where the trance is in full swing and the vibrant colors are everywhere.

Actions the player takes also affect the music. Enemy explosions add beats that sound like they should have been there all along. A missile getting fired adds a big bass beat. Employing an Overdrive (obtainable by collecting orange objects in the stage) adds another complete track for the duration of the attack, which shoots everything on screen. The sound is as important to the game as the gameplay is, and it’s one of the reasons this game was a standout in its original release.

Rez‘s visuals may shout “BASIC” at you, at first glance.4 However, as you play, the wire frames that make up the backgrounds and the polygons strapped together to form the terrorist viruses become beautiful to witness. The HD upgrade offered in this edition adds to this. This game is stunning in the way that a sloppy joe with meat pouring out of the bun gives a fat kid butterflies in his stomach.5 It’s absolutely delicious. If you’re one to go into an elliptic seizure due to bright lights and vibrant colors, go to another country when someone’s playing Rez. It’s trippy, but in the way that makes you wanna toot that bong all night long, baby.6 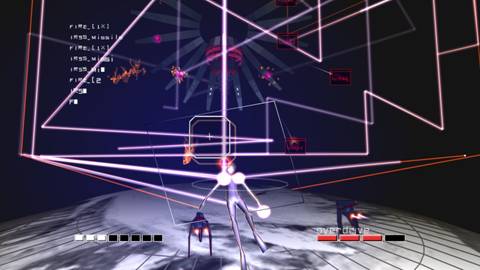 If you don’t buy this, the terrorists have already won.

If there’s anything you can critique Rez HD for, it’s that there’s not really a whole lot offered in the $10 download. There are five levels, along with a few bonus stages cut from the original game. There’s a leaderboard for every stage, as well as the direct assault mode, which lets you play areas one through five with no breaks. Topping the local leaderboards in the game unlocks new camera angles, and shooting every terrorist in a level allows you to play in the different forms in “Beyond” mode. If you’re looking to just introduce the game to a friend or are a very casual gamer, the “Traveling” mode lets you play without fear of Game Over, though it doesn’t keep your score.8 Half of the game’s 200 Achievement points are obtained from clearing the five stages, and the other ones take some time to unlock.9

However, for what Q Entertainment has offered in this remake, Rez HD is a winner.10 The gameplay has remained untouched since the game’s original release seven years ago, and the HD visuals are absolutely stunning. If you don’t know if you’re really going to enjoy this or not, try out the demo. It takes you through the first level, all the way to the boss. If you like that, you will fall in love with this game. The atmosphere, the design—it’s all got classic stamped all over it in red ink. There is a reason people rejoiced when this game was announced to get the XBLA treatment,11 and now it’s up to you to find out why. Not only that, but your sore back will be no more, and you’ll find a new respect for our Commander in Chief. I promise you.12

1. When the series ended, Sensational She-Hulk #60’s cover had She-Hulk coming to your house to rip up all of your X-Men comics. Whoops.

2. Even the barbecues during the Fourth of July.

3. Said fighting wire-frames do not look like overgrown Captain Falcons and Zeldas.

4. At which point you can tell the visuals to SHUT UP.

5. By the way, buying a sloppy joe from said fat kid is going to cost you about $1,500. You’ll get it for free if you talk to his mother, though.

6. Though, as I’m not a druggie, I’m not entirely certain if you can actually toot on a bong. Will someone clear this up for me?

8. Think of it as target practice for when the real ragheads start pouring in.

9. Literally. You need to play 10 hours to get FIFTEEN points.

10. Much like our President. (European readers—sorry your leader isn’t as cool.)

12. You know what? I’m going to make an example of this and break Sprite Monkey’s (if that IS your real name) Wii titles. Consider this a warning.