Hey GameCola readers. I bet you were really impressed by Carl’s review of Indiana Jones and the Last Crusade.* I bet you said, “Wow, how topical Carl is! Writing about Indiana Jones shortly after the fourth Indiana Jones movie came out!”

Well, Carl can bite me, as far as I care. Because when it comes to topicality, I am THE MASTER. My column isn’t based off a crusty old game like his. My column is about something much more recent. Something starring a super cool hero who faces deadly situations in order to retrieve a A CRYSTAL SKULL. That’s right, folks, this month I’m talking about… 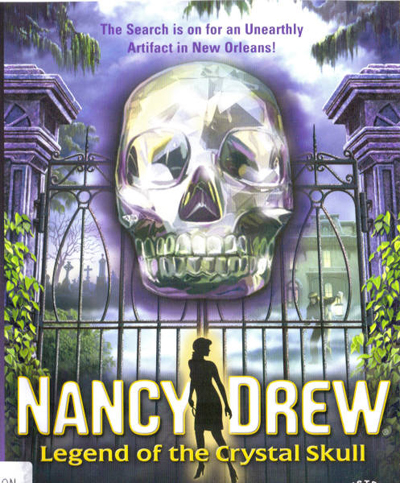 Nancy Drew and the Legend of the Crystal Skull is the seventeenth game in the Nancy Drew series, and as you can expect, it’s an awesome point-and-click adventure mystery. The story is that Nancy has gone to New Orleans for vacation, and she stumbles upon a mystery because, well, she’s Nancy Drew, and no matter where she goes, she finds a mystery. She could go to the world’s most boring, uninteresting place—somewhere that’s sort of like New Jersey—and she’d find a mystery.

This mystery involves investigating the death of Bruno Bolet, who was rumored to have a crystal skull called “The Whisperer.” Unfortunately for Nancy, Bruno was an eccentric loony who had nothing better to do than make a really, really complicated interrelated series of puzzles in order to protect the skull. Nancy seems to run into this problem a lot in this series, by the way. How many crazy old men are there who set up complicated puzzles, just to challenge other people? I didn’t think it was really all that common.

In total, there are about fifty or so puzzles in the game (Bruno had a lot of free time). For a good chunk of the game, they can be completed in pretty much any order. While this is good for gameplay, it’s not so good for guide writers like me. Instead of writing a nice beginning-to-end guide, I had to chop up my guide into multiple sections, each section describing a particular puzzle. I think it’s kind of tacky to do that with a game like this, where there are no clear section breaks.

So as I said last month, I want to be involved in the new fad where people make movies of how to beat videogames, then post them on YouTube. It’d be a nice supplement to my standard written guides, and I figured I’d try to it with this game.

It turns out that making a video guide is harder than it seems. First of all, I can only record about four minutes at a time. Second of all, video guides are tough because you have to play well. Everyone expects me to show the simple, easy solution to the all the puzzles. Nobody wants to see the ten minutes that I wasted trying to figure out how the puzzle works. So I had to play at my best, which required retrying the puzzles often (and cutting a LOT of material).

The other big problem was providing commentary for my video. I like it when people provide commentary for video guides—usually it’s interesting, and full of funny little jokes. Unfortunately for me, my microphone is mean and refuses to do live commentary. So what I had to do was improv it, which didn’t work out so well because I accidentally talked over the in-game dialogue and stuff like that. So what I ended up having to do was restart my commentary at random points, which is hopefully unnoticeable.

Anyway, enough talk about making the video. Watch the first video I made for this game, and see what you think:

So that’s it for this month. I tried out something new with writing guides, and I liked it. Maybe I’ll do it again sometime.!

PS. In case you’re interested, the other videos I did for the game can be found here. I’m not finished yet, because I’m busy writing my senior thesis right now. I’ll finish it soon, though.

* ed.: Carl’s review was put off at the last minute until next month. Whoops

The story of how GameCola was conquered in a feminist revolution, then restored to normal.