“The first chance you get, you are deleting ALL Tetris games from this damn thing,” Tom growled. “I feel more nauseous than I’ve ever been, and I don’t even have a stomach anymore!”

“Yes, yes I do. However, I do not like to ride roller coasters while being stuffed in a series of boxes!”

“Fine, fine, I’ll delete the Tetris games. Can’t promise I’ll be able to do it anytime soon. I’m no closer to getting back into the system than I was when we started.”

“What? How long is this going to take, anyway?”

“I’m sorry! I’ve never seen anything like this before and I don’t know what I’m doing! It’s not like there’s other cases of people being sucked into machines that I can work from here! Heck, I’m not even sure if this data you’re getting is doing any good.”

“Then why am I still mucking about in these electronic deathtraps? Why can’t you just put this thing on pause and I can chill until you figure out how to get me out of here?”

“One: I have no control, so I can’t put it on pause. Two: Technically, we’re not sure if it’s a deathtrap. I think you’re just assuming that if you die in the game, you die in real life as well.”

“I don’t know. Like I said, this has never happened before, so who knows what will happen? Personally, I think you can afford to die just so long as you don’t get a game over, but who knows? You could die a horrible, painful death if you even lose just one life.”

“I was being sarcastic.”

“Oh…then you’re not going to like what I have to say next….”

“From what I can tell….you’re currently in the first Contra.”

“Oh no. No no no no. You can NOT tell me that after telling me I might possibly permanently die if I lose one life that I am in Contra. Contra, the hardest damn game that’s ever existed, Contra. Contra, get hit once by one of the myriad flying projectiles and you die, Contra. Contra, the game I was never able to get past level 5 even with 30 lives, Contra. You did not just tell me I am now in that Contra.”

“Well, screw that. I’m staying right here until you figure this out. There’s no way I’m taking a suicidal jog through this jungle if we don’t even know if it’ll do any good.”

“Analyzing this data is still the best chance we’ve got. Besides, from what little I’ve been able to tell so far, the system is…adjusting to you.” 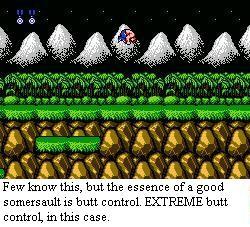 “Well from your experiences in Super Mario Bros. and Tetris, we can assume that the introduction of your consciousness to the system is having some unforeseen effects. For example, Mario never got high and passed out after grabbing a star before, and I don’t recall a Tetris block ever sprouting a tiny arm and flipping the other blocks off. And if I’m right, the system is changing exponentially in response to your presence, so unforeseen consequences may appear before you have a chance to adjust.”

“The system is changing. We don’t know how fast it’s changing, so it’s better to deal with the game now, before something new and unexpected pops up.”

“Awesome. Well I guess we’re about to find out whether dying in this thing kills me permanently.”

“You know I’m really sorry about all this, right?”

“Well to be honest, I’d be more convinced if you were a little more horrified and a little less fascinated by my predicament.”

“Right…yeah…sorry. I’ll work on that. Can I still take some notes?”

“Only if they help get me out of here. Otherwise, I had better not hear you scribbling.”

Miles of jungle stretched before Tom, and already he could see small figures in the brush moving toward him. I guess Rick’s right, he thought to himself. Enemies never moved before appearing on screen, and now it looks like they’re actively seeking me out. Awesome. Checking his gun, he charged into the brush, wildly spraying bullets in every direction—his usual strategy when playing Contra. Pixelated soldiers suddenly began rushing toward him. A few even managed to get a shot off before they were dispatched, but Tom found that his reflexes had improved greatly since his first unsteady jaunt through Super Mario Bros., allowing him to dodge their projectiles with ease.

Whereas defeating Goombas had disturbed him, Tom found he was surprisingly unsympathetic toward the Red Falcon soldiers. He reasoned that it was probably because of his not-so-latent hatred for the game and its seemingly insurmountable legions of enemies.

Tom found himself growing increasingly frantic, for he knew it was only a matter of time before the air around him would be literally filled with bullets, and his chances of survival would be next to zero. To make matters worse, an earlier misstep had caused him to lose his favorite spread shot power-up, leaving him with a less than impressive machine gun that could only fire in one paltry direction. Sigh, he thought to himself.

Suddenly, Tom felt a crushing feeling in his chest. He looked above him only to realize, too late, that he had missed an enemy grunt on the ledge above him, and there was now a bullet lodged somewhere in Tom’s chest. Well, that’s it, thought Tom. Mom always said that videogames would be the death of me. As Tom’s vision faded into darkness, he could hear Rick shouting at him, but he could not make out what his friend was saying. He felt himself falling slowly backward as time slowed to a crawl. He looked into the digital eyes of the soldier who killed him, and thought he saw for a moment a faintest hint of intelligence. All around him he could hear enemies still heading toward him, and chuckled to himself at how disappointed they would be when they arrived. After what seemed like an eternity, Tom hit the ground, and everything stopped.

Almost immediately, Tom was back on his feet, and before he could think about it, he had quickly dispatched his assassin and a number of other soldiers who had appeared. Once the danger had passed, he regained enough control of himself to realize that he was, in fact, alive.

“Yeah, it’s me. I guess that answers our question about what happens when I die.”

“Yeah, I guess so. Thank goodness, I thought you were a goner.”

“Me too. I guess now it’s back to work before I get ambushed again. Losing a life might not kill me, but I’m not curious enough to see whether a game over will.”

“Yeah, I can imagine. So I was wondering…do you mind if I pick your brain about the experience later…after we’ve gotten you out?”

“Yeah sure, but ONLY after. Speaking of which, what do I have to do to get out of this game?”

“Looks like you have to beat the first boss, and then a new game will load.”

“Great. I only have two lives left, and I’ve never been able to get past the first boss without losing ten.”

“Actually, you have 29 lives left. I was never able to get very far with the original three lives, so when I was loading the game into the system I tweaked it to automatically start with the Konami code in effect.”

“You magnificent, cheating bastard,” said Tom, continuing his trek into the digital jungle. “I’m beginning to think I might survive this after all.”

Hello again everybody, and welcome once again to Digital Championship Wrestling! I'm Paul Franzen and with me tonight is "Captain" Eric Regan, and for the first time in DCW history we've actually got ...