Nelson Tethers: Puzzle Agent introduces us to the most secret (and yet perhaps most vital) department of the FBI: The U.S. Department of Puzzle Research. As an agent of said division, Nelson Tethers spends the majority of his time solving puzzles for himself and for other members of the FBI. “Tethers, what’s a nine letter word for baffling?” “That’s recondite, sir.” Crosswords, code-breakers, conundrums, and the like aren’t a moment’s challenge for Nelson. He doesn’t do far more at work than complete crossword puzzles in the newspaper. (That’s a nice cushy job, if you’re offering.) 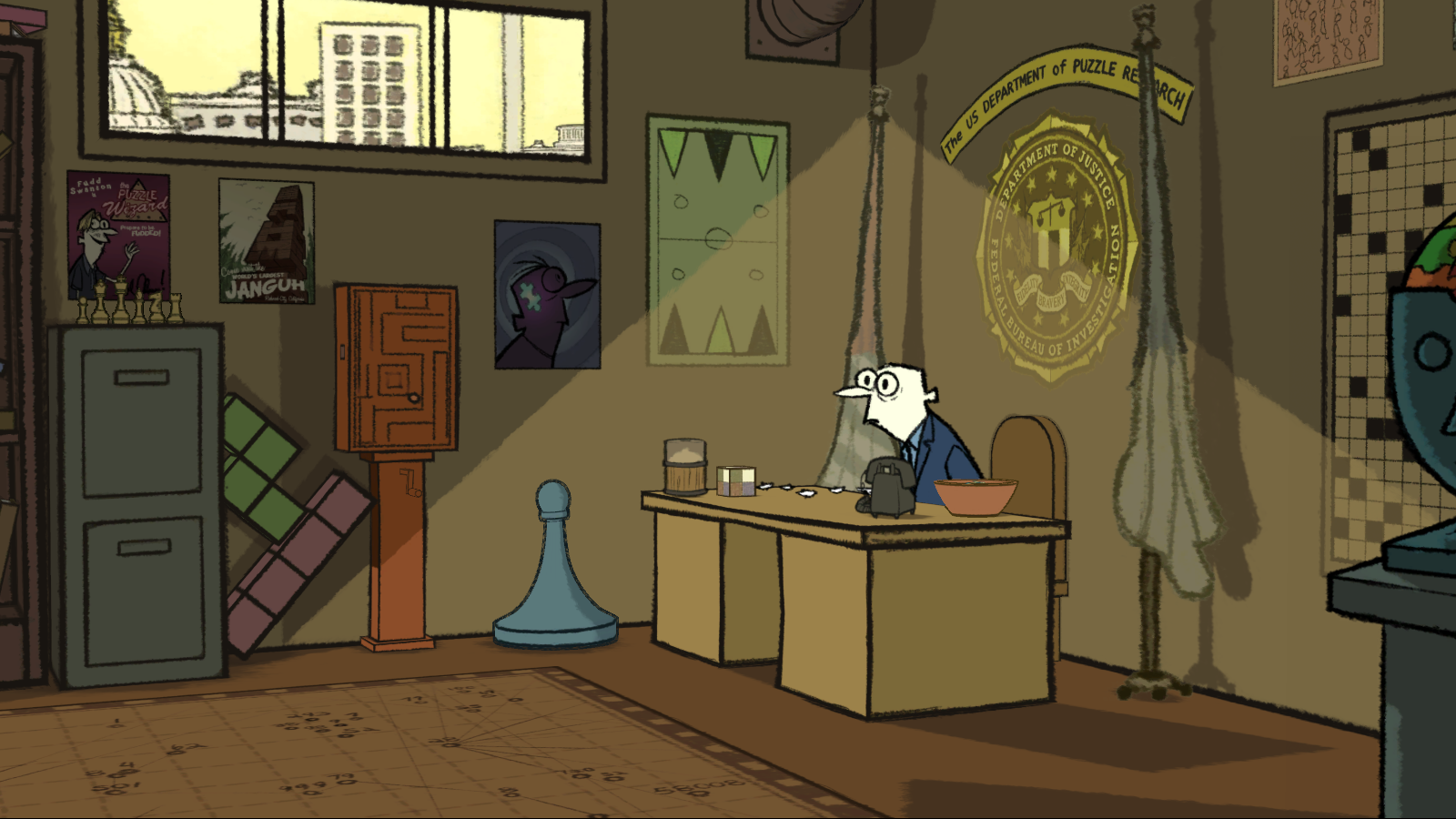 Jenga posters, Tetris blocks, and even a chess pawn. Nelson’s office is awesome.

Whilst busy at work trying to solve a crossword puzzle, Nelson Tethers falls asleep. He dreams of a man dressed as an astronaut entering his office, and if the surreality of the situation hadn’t already perturbed Agent Nelson past the threshold of comfort, the figure scribbles over the crossword and scares the living daylights out of poor Nelson. Awakening from this insane situation, Nelson finds his crossword torn up and scribbled over, just like in his nightmarish vision. Thus begin the strange events of Puzzle Agent, all of which are the kind of “twisted” that I thoroughly get off on.

While I’m not generally a fan of the puzzle-adventure hybrid genre, Puzzle Agent reminds me quite strongly of a certain game about lawyers that I quite enjoyed playing. The puzzles also share a resemblance to a certain game about a professor and his young apprentice, which I also thoroughly liked. Being influenced by the best games in the genre clearly shines through, as the game sticks closely to this theme throughout. 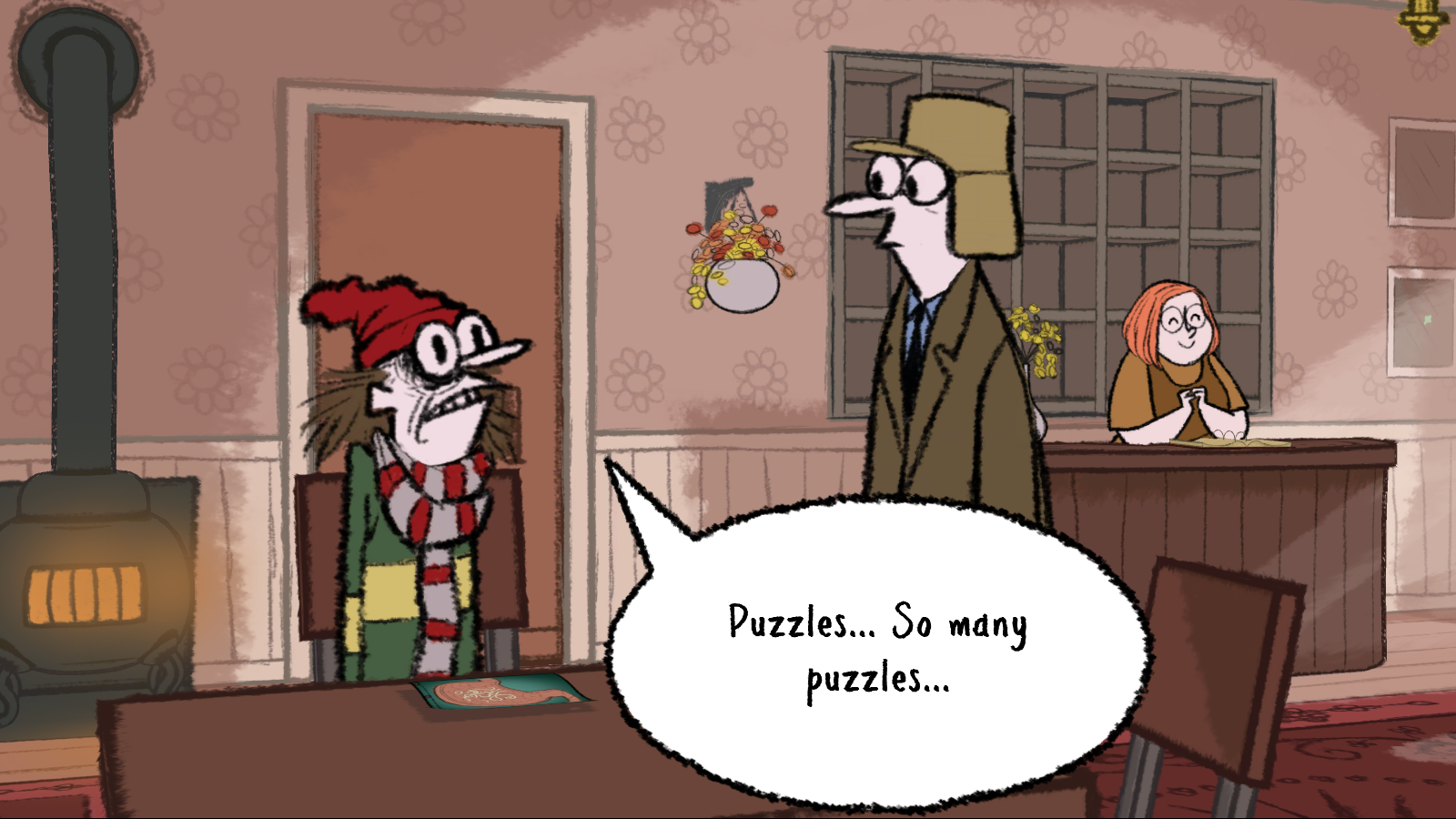 Years of being lost among red and white things have driven Waldo mad.

Puzzle Agent is a really beautiful game. Experienced in full-screen on a widescreen monitor, the visuals are splendorous. There’s no doubt whatsoever that Graham Annable is a talented artist, although—I probably shouldn’t admit this—I’d never heard of him or seen his style before seeing this game. I’ll definitely be paying attention to his work from now on. The game has a very strong impact on the eyes; with its block colors and scruffy lines, it stands out from the majority of other comic styles.

The game’s environments are designed to resemble Annable’s scrawled characters. Modeled in 3D (although that may not be obvious at first glance), they are just as caricatured as the characters themselves, and they’re simple enough to look good on machines that aren’t up-to-date graphically. Unlike in most Telltale games there are no sliders for graphical settings, which I assume means that Puzzle Agent doesn’t require much graphical power to run. The puzzles themselves are also well illustrated, as you would expect, given the quality of the characters and environments. Standing back from this game, you can imagine it hanging in an art gallery. Before any decisions can be made on just how good a game it is, it is your duty to gawk at its presentation. 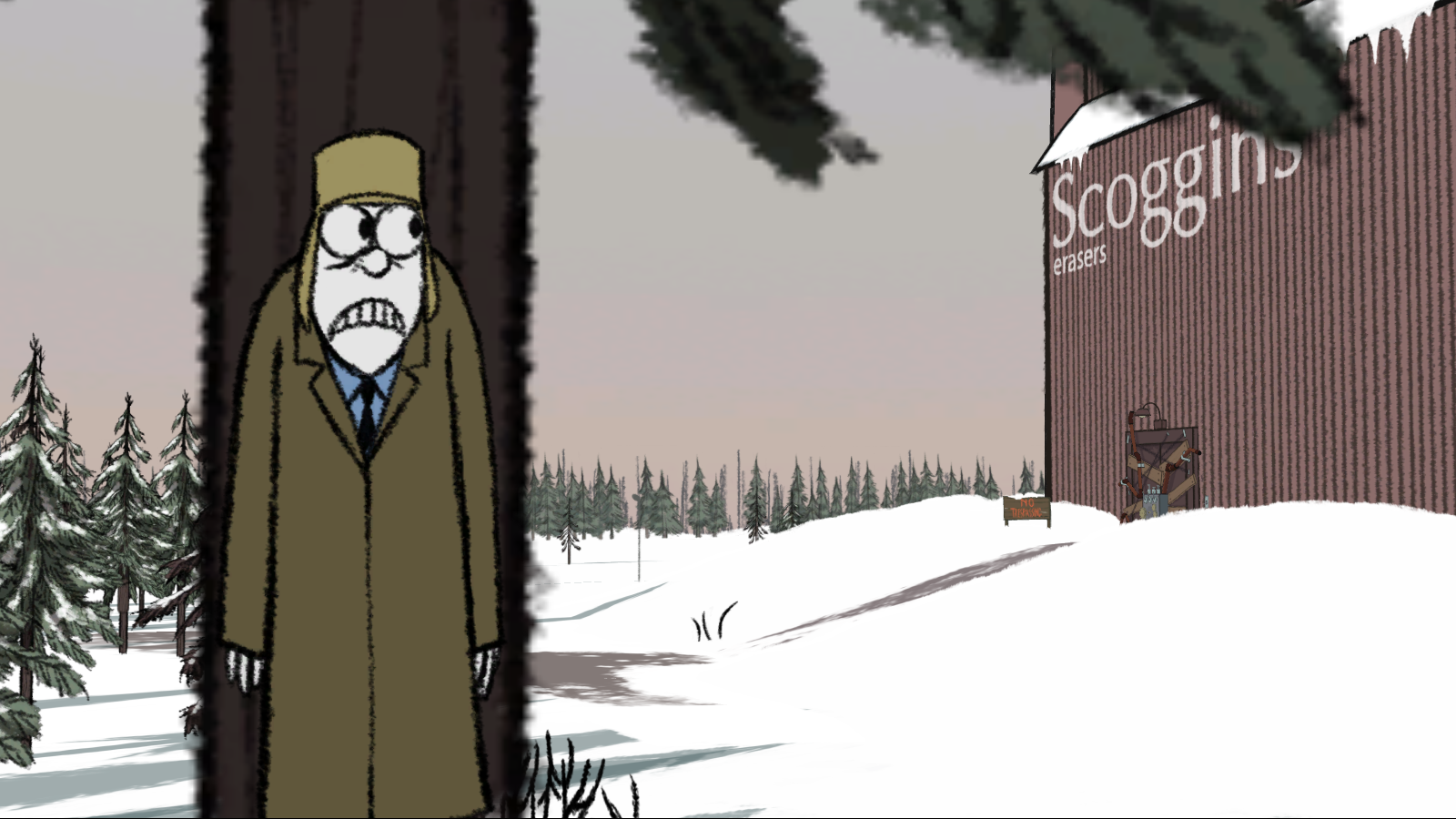 The game is graphically simple, but it just goes to show that simple can be better.

There are some deceptively difficult puzzles dotted around this game, some of which are tricky because of the way you’re expected to find the answer, and some because they’re worded in a way that just makes them impossible to understand. I cannot beat a single adventure game without a guide, and Puzzle Agent reminded me of the days I would sit down and play the game about lawyers with a handy walkthrough on the side, in case the game became too challenging. I didn’t have this option with Puzzle Agent (as there weren’t any guides available when I played it), so I had to use trial and error on a few of the puzzles.

One of the few frustrating elements of the game is that you can’t re-do a puzzle after you’ve beaten the game. You can still replay the puzzles, but you can’t improve your score. This means that the completionist in me would have to start a new file and complete each puzzle perfectly, first time. Puzzle Agent uses the same answers every time, so if I really wanted to, I could. 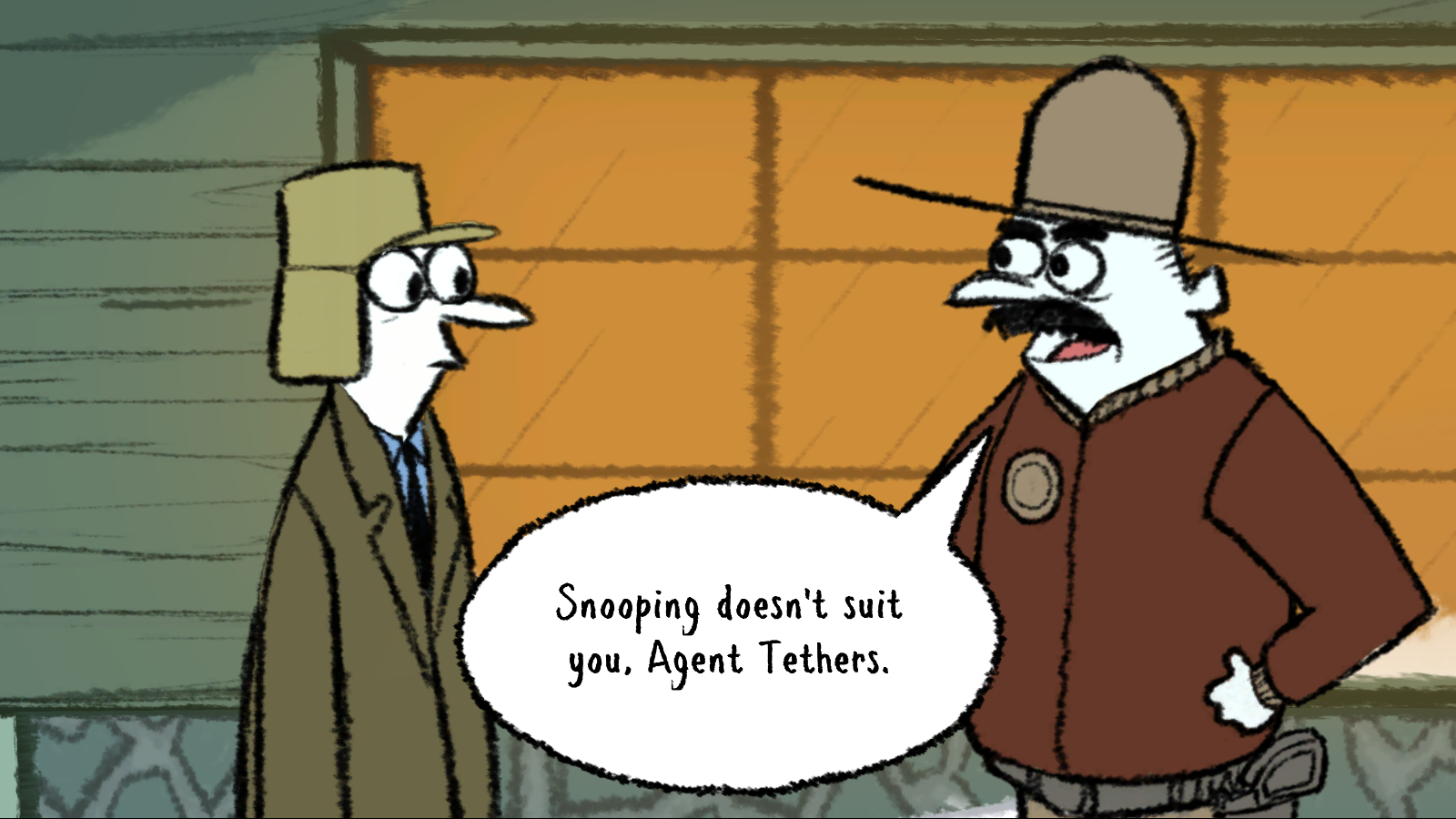 …but your hat sure does.

The hint system is useful at times, but its information isn’t usually helpful until you reach the third hint, and you’re only allowed three hints per puzzle. Collecting hints is rather easy, and much easier than in the game about the professor, because you can effectively search the screen for secrets by clicking anywhere. Even stockpiling on hints (I had nearly thirty by the end of the game) won’t help you if the challenge makes absolutely no sense, though.

Shortly into the game, there was a challenge that managed to unnerve me for a moment, as I just couldn’t work out the answer. To save you some grief, and just to make things easier for you, Nelson’s hotel room number is 9. 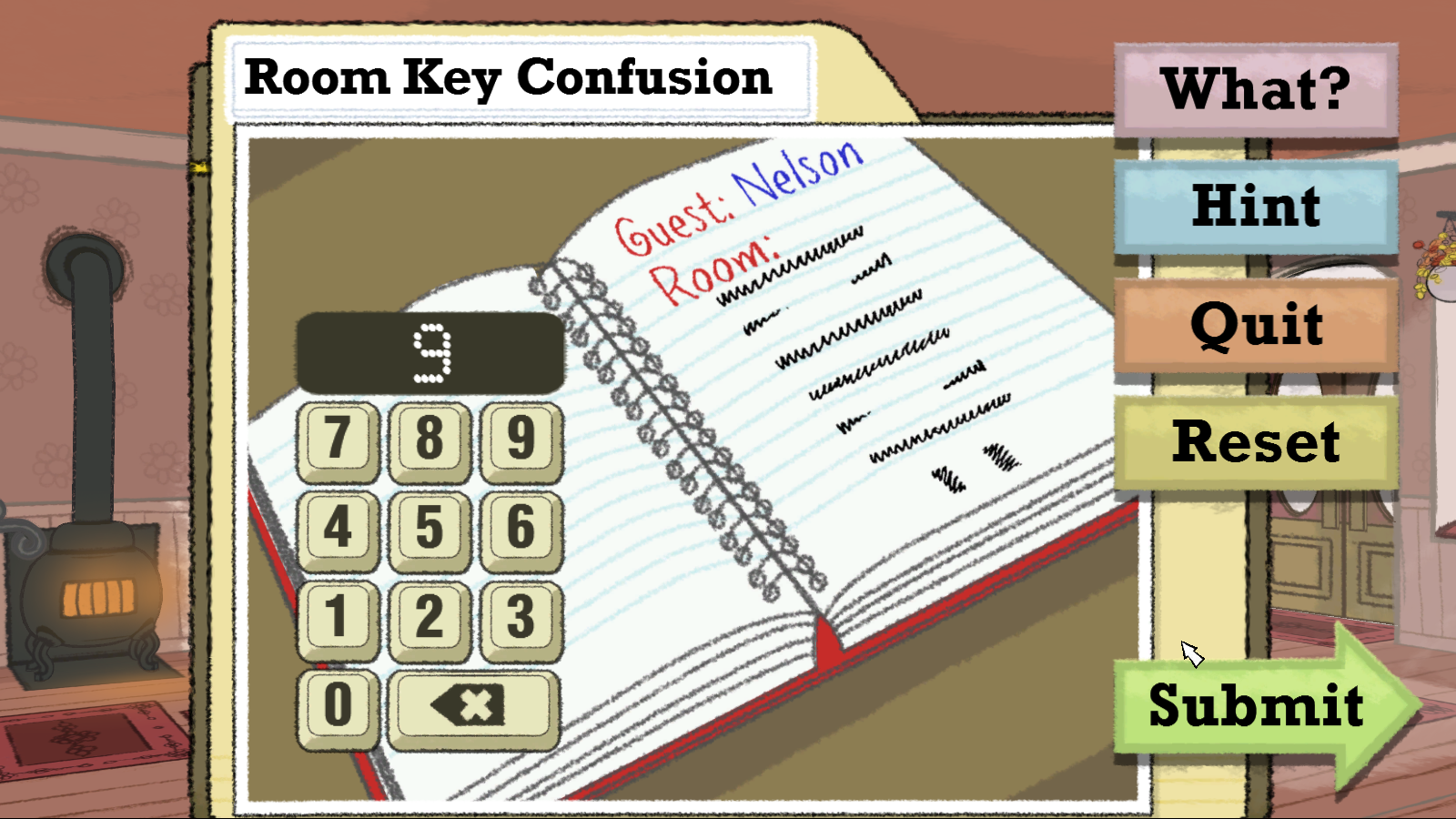 I honestly couldn’t see the word NINE on that page.

The game is rather short (although I’ve come to expect this with Telltale games), but adventure gamers may want to play it again every now and then to find any jokes or puzzles they missed, or to better appreciate the humor, now that they don’t have to worry too much about the puzzles. The characters are quirky and worth coming back to, with voice acting that fits them snugly. Every line of dialogue has accompanying voicework, which greatly adds to the charm and appeal of the game. The story, while short, is well-rounded, and not a single thing is left unexplained. There are a few things here and there that make more sense on your second time through, though. The game’s environment, though small, is fully covered during the story, and there are only a few small sections of the town that you don’t actually visit.

The weirder elements of the story are not completely out of place, although a few events didn’t make much sense to me as they were happening (I’d hate to ruin anything for you, so I’m not going to). These “horror-esque” moments impact the gameplay quite strongly, forcing you to leave a puzzle and come back later. It pissed me off a bit when a little red gnome appeared out of nowhere and caused me to go on a wild goose chase, but it all kind of makes sense in the end. 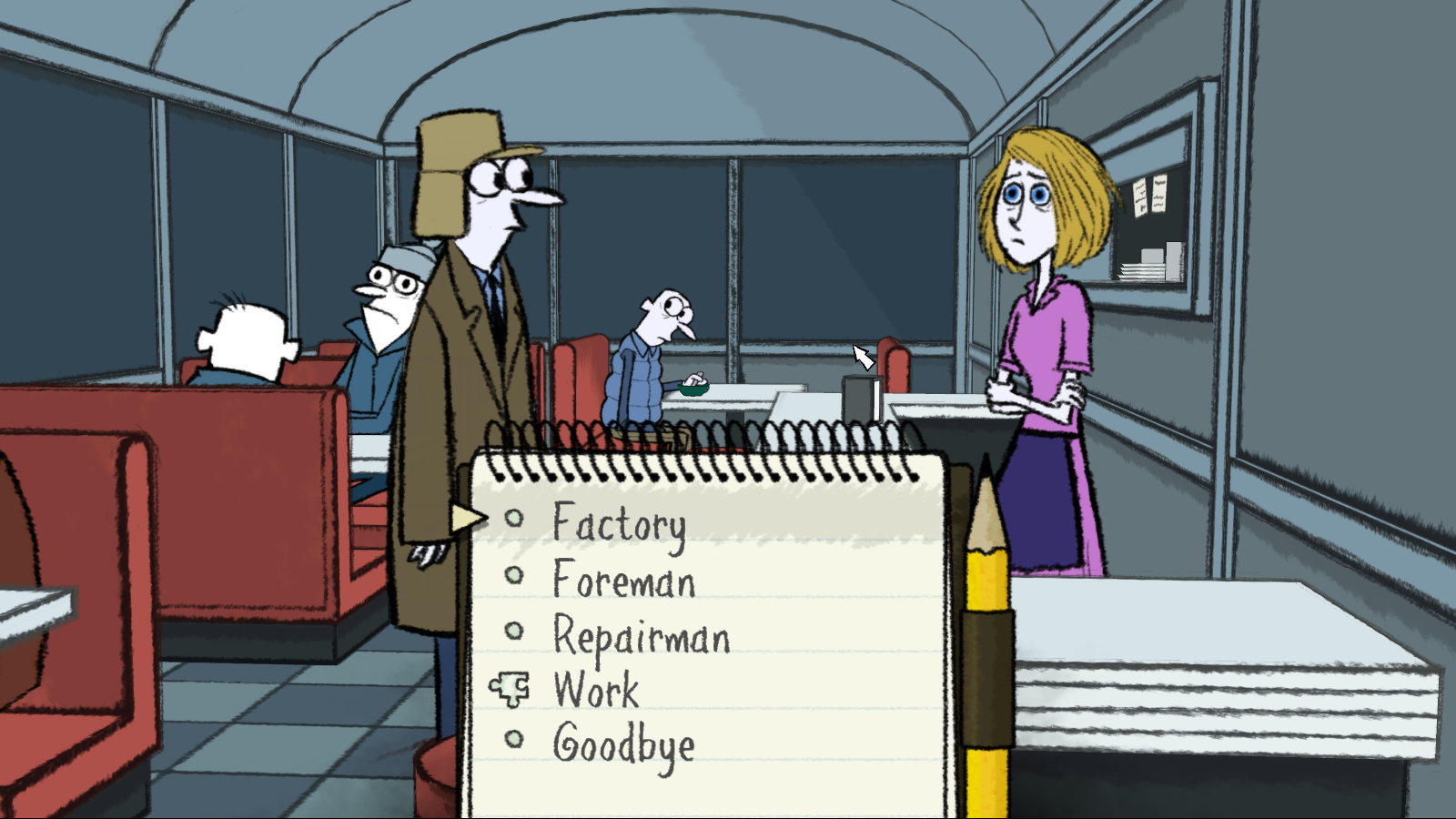 Conversation trees are simple and completely to the point.

Funny, genuinely charming, and very amusing, Puzzle Agent delivers an abundance of quirky characters and witty dialogue. The humor also extends into some of the puzzles, such as helping waitress Gloria fit a whole breakfast onto one plate, or physically altering a mad-man’s brain signals so that he stops freaking out. Despite being very simple in all of its delivery, Puzzle Agent excels creatively.

Every aspect of Puzzle Agent oozes charm. When you’ve correctly guessed the answer to a puzzle, you can click the “How?” button to learn why your answer was correct. Or, if you guessed the wrong answer, you can click the aptly named “What?” button for advice. Also, the way Nelson chooses to report the most inane rubbish into his portable dictaphone delivers a regular smirk, especially when he follows it up with “I don’t know why I’m reporting that.”

With the ease and simplicity of downloading and registering Puzzle Agent, there’s nowhere better to look if you’re in need of a quick adventure game fix. I look forward with anticipation and hope to future Puzzle Agent games. Without ruining any more of the magic for you, I suggest you make your way to the Telltale Games website and download the Puzzle Agent demo. If you like what you play, which I’m sure you will, then you might see a small red gnome swipe ten dollars from your wallet and run off in Telltale’s direction.