If you’ve been paying attention over the past nine months, GameCola Faithful, you have realized that I have an almost fanboyish obsession with two big game developers: Rare, whose upcoming Banjo-Kazooie: Nuts & Bolts I plan on giving a perfect score, our editors be damned, and, of course, Harmonix. And while I’m going to need another month until I have just enough information to give Rock Band 2 a perfect score as well, I can waste time now and write a review of another one of Harmonix’s recent treasures—a game that should be the only game you should actually buy for your iPod.

I do not consider an iPod or a cell phone to be the right medium for a videogame,1 but with Harmonix’s Phase, I had to call an exception to the rule, simply because I was fascinated with the idea of having a Rock Band-esque title that could play any song in my iTunes library. And for the most part, it does work. It’s a solid time waster; a must-be for any handheld game, and it’s a brilliant way for the rhythmless to build up their ability to press a button in time with whatever shitty J-Pop they are forced to carry on their iPod.2 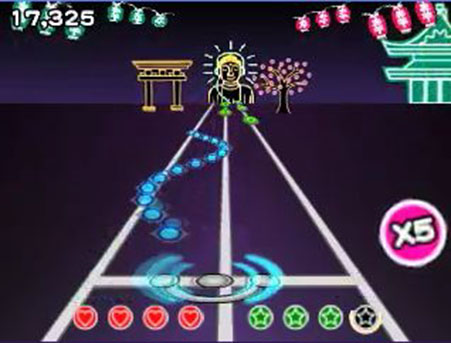 The visuals are kinda bare bones here. It’s like you’re running a marathon, and the winner gets to rub the Buddha’s belly.

If you’ve played any Harmonix title in recent years, you should understand Phase’s gameplay right away. Notes come flying at you on the screen. You press the left and right side on the click wheel and the middle button when the notes hit an indicator at the bottom of the screen. You spin the click wheel when a segment of notes in a squiggly line shows up. The more notes you hit, the more points you get. The more notes you get in a row, the higher your point multiplier is. It’s the same stuff you’ve been doing ever since you grabbed your first plastic axe in 2005. There are just fewer buttons to press and no real instrument to tap along with.3

Each song is divided up into two to 11 portions, depending on its length. During each segment, players must earn a number of stars in order to progress to the next section without losing a life. Playing well enough to earn extra stars earns you extra lives. Run out of lives and fail another track, and it’s game over for ye. If you want to get the stars you need, you need to keep your streaks going in order to keep your multiplier high. Normally, this wouldn’t be an issue, but it’s slightly hard to ensure you’re pressing the click wheel buttons hard enough to actually register with the game. It’s more of a design issue I have with the iPod that strengthens my resolve over the stance I stated a few seconds ago.

Perhaps the nicest feature of this game is the inclusion of your own music for your own use in game. Phase ships with seven songs with it, two by bands any member of the Life Partners of Harmonix should know and, to an extent, worship.4 All these songs are fine and dandy, and match really well with the charts produced in game, but throwing your own music into the mix is what makes this game great. I found much enjoyment playing the game with songs like “Devour” by Shinedown, “Vicarious” by Tool, and “Not the Sun” by Brand New, as well as several other songs, but I found that not every song gets a chart that really makes sense. 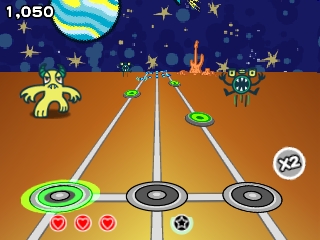 Somewhere on this page is a GameCola writer’s SAT score. Guess who it is, and what number it is, and you too will win a lifetime supply of GameCola t-shirts! 5

See, how a song’s chart is created is by Phase looking at all the beats and developing a rhythm out of them, paying no attention to what instrument has the melodic line at the time. This results in charts following parts you may not be paying attention to or not even following anything at all. The fact that the gameplay screen does not feature bar lines to indicate exactly when the notes sync up is a nightmare when the note is a sixteenth off the place you’d expect it to be. Interludes with no noise or held notes also have notes in them for seemingly no reason. The fact that we also have no way to create a chart for a song is slightly a tiny deal breaker. Not every song will simply work with the program, but the majority usually will. It’s something you’ll simply have to experiment with after you download the title.

Phase is a useful distraction when you’re listening to music. It takes a good idea and builds on it, and it can actually be useful when say, listening to new music, if you’re like me and you don’t like sitting there and just listening to something. If you’re that guy who sits around at home playing Rock Band all day, or maybe you love your iPod a big fluffy lot, or maybe buying more Harmonix games simply makes your balls feel bigger,6 you should take the splurge and memory space on your iPod and get the $5 download. It’s quirky and fun enough to make you feel too distracted to jump on your feet and dance when listening to your expansive collection of Musical Theater Showstoppers.

1. Sonic the Hedgehog on a click wheel? Playing that game with a standard controller is hard enough!

2. The amount of J-Pop on Meteo’s iPod is enough to make a German bodybuilder weep like a baby.

3. So no complaining about orange frets when you lose, you musically-inclined waste of space who couldn’t tell the difference between a triangle and a tenor sax!

4. We don’t accept gays into our church.

6. The sole reason EyeToy: Antigrav is in my collection.

After the seriousness of last month’s column, I thought I would take a step back this month and look at something a little bit lighter. After debating several possible topics, including “Why I Wil ...