In which GameCola writers and the videogame world at large talk about what’s up in gaming.

Brendan Becker is the Head Chairman/CEO of the Music and Gaming Festival, also known as MAGFest. MAGFest is a festival held in Virginia every year that celebrates videogames and videogame culture, featuring a large 24-hour gaming room and concerts with game-inspired bands. Other highlights include videogame tournaments, a 24-hour LAN room, a 24-hour video room, a videogame auction, and guest speakers.

MAGFest VII will take place on January 1st through the 4th in Alexandria. Powerglove, Smash Bros., and Year 200X will be performing, and speakers will include the Angry Video Game Nerd and representatives from PBC Productions, X-Strike Studios, and ScrewAttack.

This is Brendan’s first appearance in Versus Mode.

Sprite Monkey is a current GameCola writer known for his reviews as well as for Are You Game?, a column that rates your videogame collection and tells you if it’s up to snuff. He’s also the artist behind Secret of Mana Theater, a flash Web comic based on the classic SNES action RPG. This is Sprite Monkey’s third appearance in Versus Mode, having written previously with Alex Jedraszczak and Zach Rich.

1. Players should receive real-life rewards for earning Trophies or Achievements in videogames.

Serious answer: I can see the merit in this, but it’s not really going to make me buy a PS3. Buy a $400 console so I can get a free burger after playing something (which is still only going to be MGS4 or LBP) on it? $400 buys a lot of burgers, you know.

Sprite Monkey: Yes, why not? Most likely the things you’ll earn with Trophies will be online cosmetic enhancements, and that’s the way it should be. The purpose of the Trophy system is to show off your gamer “cred,” if such a thing even exists, so earning some little plastic Trophy on your bookshelf is pretty much the same thing. There is a problem, though, if Achievement nuts get rewards that help them play better, like better weapons than people who don’t earn Achievements.

2. Square should stop giving their lead characters such wussy-sounding names.

Brendan: Not-so-serious and serious answer: While they’re at it, Square 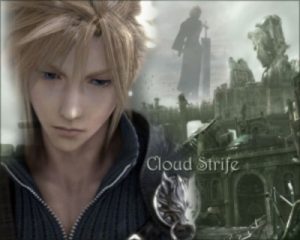 should stop making the characters themselves wussies, too.

Sprite Monkey: Not really; cool names are relative and silly names are nothing new. While the name Snow Villiers may sound wussy to Americans, it may be a really cool name in Botswana or Guatemala or Japan, but I wouldn’t know; ask Richo Rosai. Wimpy names are really nothing new, dating back to my personal favorite, Secret of Mana on the SNES. The hero and his two companions were named Randi, Purim, and Popoie. Nothing strikes fear into the hearts of villainy like a midget sprite named Popoie!

3. The ESA should bring back booth babes as part of its restructuring of E3.

Brendan: Not-so-serious answer: For E3 to become the pit of despair it used to be, this definitely needs to happen.

Serious answer: I can’t say I mind having something nice to look at while I’m at a gaming expo. But, for me, that’s games. The girls, while attractive, take a 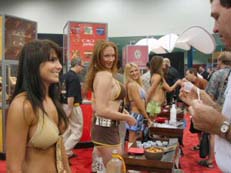 back seat to them, because in my experience their resumes don’t include knowing anything about the product. Sex sells, but ladies that worked on the product can probably sell it better.

Sprite Monkey: Yes, because booth babes don’t sell games—games sell games. If your product sucks, it doesn’t matter how much male or female skin you have at your booth; your game still sucks. You’ll just be remembered as that crappy game with the HAWT booth babes. Besides, E3 still isn’t open to the public, so who cares? Who am I to deprive someone else of a few gorgeous blood elf warriors? Ask me about restructuring conventions I can attend and then I might give a crap.

Brendan: Not-so-serious answer: So does this mean we’re going to have a bunch of naked Avatars running around playing games because no one is willing to buy clothes? And does that mean, for the people too lazy to dress their Avatars after buying it, their Avatars will just stay half-dressed?

Serious answer: How about taking a hint from Sony (yeah, I said it, *sigh*) and combining the whole Achievements thing with outfits? It would be kind of like getting outfits in Rock Band. I would maybe pay to design my own outfits, but not choose, unless they were like a dime or something. I guess even though I say it’s ridiculous, surely this will appeal to some girl addicted to shopping or some guy that wants new bling. And where there’s money to be had, there’s Microsoft.

Sprite Monkey: People should have the option of paying for exclusive stuff for their Avatars. If your choices are limited to underwear or only store-bought Avatar clothes, then that’s cruel, chilly, and leaves you prone to shrinkage. However, if you want a Companion Cube shirt to show off your demented sense of love, be willing to fork over some cash or points. Here’s an idea, Nintendo: please do this for Miis. Here’s another: how about being able to spend some of those Achievements Points….

5. LittleBigPlanet players should be allowed to make levels based on other IPs.

Brendan: Not-so-serious answer: Mario was too big for a little big planet. He needed an entire GALAXY.

Serious answer: Sony should have stuck with not owning the content and just disclaiming all of the content created by players. Yes, I realise there’s probably a billion loopholes there that would cause headaches, but really all that is going to happen is people are going to create IP-infringing content, make it copyable, tell people to get it right away, and off goes the “underground movement”…bleh. MAYBE unofficial LBP servers could remedy this, but I’m really getting ahead of myself here.

Sprite Monkey: Although I am a long time supporter (and abuser) of fair use copyright laws, I ride the fence on this one. On one hand, fan-made levels impede the ability of a company to sell levels. Who’s going to buy a Kratos level when there are hundreds of them already available by fans? On the other hand, if developers make unique, innovative, and entertaining levels that are superior to fan content, then people will pay for it regardless of how many fan levels exist. This also means developers will have to work harder to turn a profit off of every level, but ultimately I think the policy should stay the way it is. It will help churn some genuine creativity out of fan levels.

Because Panasonic is coming after your marketshare, with a brand-new portable gaming console that...only plays MMOs...