GameCola Faithful, I may have made a horrible mistake.

One year ago, when I was a bright-eyed, bushy-tailed lad of 17, I wrote my first article for the ‘Cola, celebrating an obscure Nintendo 64 game and taking a jab at an obscure GameFAQs reviewer known as Big_Blaze, and his love of that horrible furry fetish fuel of a game Sonic the Hedgehog (2006). Well, a few weeks ago, I received a strange package, mailed to my house with no return address. The package contained a copy of Sonic Unleashed, which looked slightly interesting, but I decided to throw it aside in order to put more time into staring at a blank wall and deciding if I really like Banjo-Kazooie: Nuts & Bolts or not.

Soon after, I would go to bed at night, and wake up to find myself not in my bed, but in my extremely comfy gaming chair, upside down, with a controller in my hand and a bottle of Vicks Vapor-Rub in the other, with Sonic Unleashed paused on my TV screen. I figured I was reliving my unhealthy relationship with F-Zero X back in ’98 and went on with my day, but as of a few days ago, I’ve been falling asleep in my classes and waking up in the same position, with the same items in my hands and the same game displayed on the screen. Now, I’m truly frightened. I fell asleep in the middle of my Advanced Algebra and Friends class yesterday, and just woke up at my computer, with a Word document pulled up. It was a message to me…from Big_Blaze.

“Yo, Punk! Dis be Big_Blaze in yo’ hizzy! Chillin here in teh afterlife and takin your body so’s I can get the good word out about amazing games, even in death! So’s I got my buddies up here to teach me all about dis possessin stuff and WHAM! I be takin your body for a little joy ride! Hope ya don’ mind me takin a few liberties. Yer sister’s hot shit, yo! Anyway, I’m takin control of your tiny and weak body so’s to spread the word about the best game in teh world! Hope yo’s not to be mindin. Big Love, Buaddah.

I’m not sure what to make of this, my friends. I’m being haunted by the spirit of a GameFAQs user who loved shitty games. There’s only two things I can do. I can either build a time machine and go back in time, and kill Paul Franzen before he can offer me a position as a GameCola staff member, or quickly play through Sonic Unleashed and write an unfunny but truthful review in the next ten minutes. However, I don’t have the patience to build a time machine. And I don’t have the creative capacity to be unfunny. Um…here, look at the monkey. I’ll be over here…thinking of something.

Upon further research, I discovered this to be Sprite Monkey’s granduncle, who fought in Vietnam. Oddly enough, he’s also Meteo’s grandaunt.

…OK. So, it’s been about 16 hours, and I’ve played through the game. I’m not sure if this is the spirit of Big_Blaze talking or not, but I actually had a bit of fun with the game. I can safely say that about 40% of this game is fun. And I’m thinking you know which 40% I’m talking about. The issue with Sonic games these days is the deviation from the program the series originally ran with. This is shockingly evident with Unleashed, when you compare the speedy, 2D levels with Sonic to the God of War-like dungeon crawlers you’re forced to drag through as the Werehog.

The speedy 2D levels are by far some of the best Sonic gameplay we’ve seen since Sonic’s jump into 3D. They’re fast, they’re fun, and they give us everything we want out of the character. There are multiple paths on each stage, hidden goodies to uncover, and a perfect sense of running really fast. The controls are a tad hard to get used to; Sonic’s homing attack is now mapped to the B button, while the jump is still the A. If you’ve been playing Sonic’s other 3D titles, it will take you an extremely long time to get used to this, which is frustrating when this mistake will often cost you a life, also resetting your score on the stage. Sudden and unexpected bottomless pits and awkward enemy placement don’t help much either, but it’s refreshing to know that one hit does not knock all of the rings out of you anymore, making combat a tad more forgiving. If this was all that Sonic Unleashed was, I could stop talking now, give the game at least a seven, and go to bed. But if this was all that was wrong with the game, I could also let the spirit of Big_Blaze take over and let him tell you this for me. 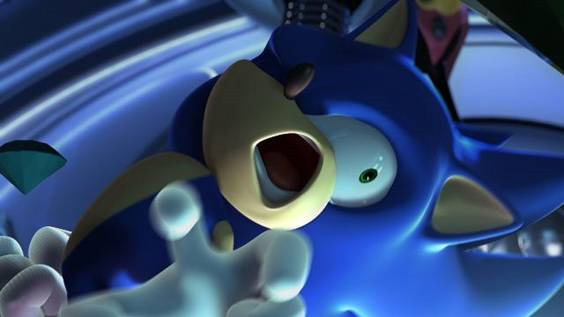 Kind of a precursor to the rest of this review.

Sadly, it’s the rest of this game that pretty much ruins any momentum the Sonic stages give it. Werehog levels not only come more often than Sonic levels, but a Sonic level will last about 10 minutes if you’re good. It took me a solid FORTY MINUTES to get through the FIRST Werehog level, and there wasn’t a second of those forty minutes I could call enjoyable. The emphasis on combat during these segments is laughable when the combat is about as fun as staring at the box art for 30 minutes then whacking your head with it for the other ten. Monsters are generic, plain, and boring. Unlocking combos means nothing when they become so touchy you need to pause the game every few seconds to make sure you’re doing them right. Every little hit makes the Werehog flinch for too long, and blocking them doesn’t do anything for you, ’cause usually there are so many monsters on the screen that the second you let down your guard, they just throw something at you anyway.

The constant use of quicktime events every second would be forgivable if you had a second to react to them, and the game gave you a break if you accidentally pressed the wrong button. I confuse the X and B buttons constantly, but most games give you a diagram to show button placement. Sonic Unleashed gives a great big FUCK1 THAT, and demands perfection right from the get go. Which makes the somewhat flashy finishing moves some bosses NEED to be taken down with frustrating, as your life bar goes down quickly due to the player’s constant fuck ups. The platforming in these levels is downright terrible, as well. Once again, grabbing ledges is mapped to the B button, and sometimes the game will simply not register the fact that you are RIGHT NEXT TO THE LEDGE, sending you into another bottomless pit, and the loss of another life.

The Hub Worlds also make a return for the 360 and PS3 versions, serving as grounds for random people to comment on absolutely nothing. These areas are populated with cartoony people with weird names commenting on nothing more important than the weather. You’d expect them to at least maybe run in fear of the Werehog, but no. All they do is offer you ice cream and comment on the local whore’s bleached blonde hair. The Wii version is lucky it didn’t have the space to include this horrible excuse of a feature. 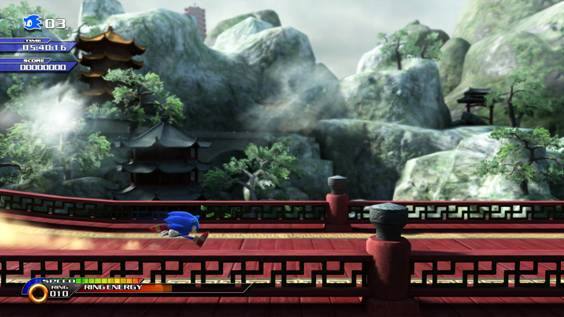 What they don’t tell you is that this is Green Hill Zone.

The storyline is laughable. Eggman woke up one morning and decided instead of joining Sonic and friends for tea, that he’d uncover the hidden evil inside the middle of the earth by…blowing it up? So, the world now has several floating continents, and it’s up to Sonic, now cursed to being a Werehog because he got zapped by Eggman’s planet-go-boom laser, to put the world back together, destroy the evil creature, and fix his little lycanthropy. I’m not sure which is the bigger curse, though: the Werehog, or the shitty little follower he picks up for this adventure. Chip has officially made my list of horrible, horrible videogame characters to burn in fires. The voice acting is a joke, the character looks like a cross between a Chao and a Furby, and there is no character trait that annoys me more than the one where food is your major motivation. The lack of almost every supporting character in the series is a tad weird for a series that has grown a roster of furry underlings, but the lack of Knuckles, of all characters, is downright confusing. At least Amy is around to unleash that pent up sexual tension you’re going to get from playing this game while not having sex.

It saddens me greatly to know that the key to making an incredible Sonic game again is locked up and buried deep within the wastes of Sonic Unleashed. I’m not sure how many tries it’s going to take until someone over at Sonic Team gets it right, but I also understand that Sega are controlling dicks who also don’t give the development team enough time to make an actual good game. I don’t know how much longer the old boy is going to take before someone puts a bullet through his speedy legs, but at this point, I can only imagine he’s only going to get about 34 more tries until someone actually does it.

OK, I think that should do it…now just send it off to Paul before…. There! Now Big_Blaze will never be able to touch my opinion of this game! As long as he’s not some ultra hacker or anything…I should go find myself a good exorcist….