Warning: The following article may include gratuitous use of italics and/or parenthetical statements. By reading it, you agree that you are assuming responsibility for your own risk and will not sue the author or distributor of this article for emotional distress due to overly emphatic writing. Thank you.

It has been a slow month in Gamer-Girlfriend Land (which is to say that it has been an extremely busy month in Real Life, so I did not have the time to play anything that I could recount for you all in hilarious detail). As a result, I am once again forced to relate the tragicomic adventures and travails of my boyfriend, who somehow always seems to find time to play games no matter how busy he is. He’s kind of a jerk that way.

Anyway, the latest craze in the Rich-Ridgaway household (shut up, I know it sounds funny) is a new game Mike is playing called The Valkyria Chronicles. It is certainly not the only game he has played this month (curse you, GameFly!), but it has definitely been the most interesting. Like any good game, it has well-developed characters and an engaging plot. But what really got me about this game in particular was that the plot was more than just engaging. It was moving. This, I have found, is a rare occurrence in videogames, and it certainly got my attention. 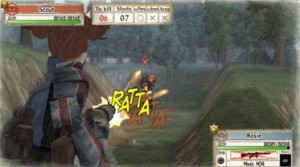 To be fair, I was only really half engaged for the first several chapters of the game. I would read or knit while Mike would occasionally fill me in on plot details. He described his favorite characters in depth, and talked about the faux-World War II setting, the back-stories of the main characters, and the indescribable loathing he felt for Selvaria (aka “Über-Bitch”).

As he spoke, I listened with passing interest, and then immediately returned to my book. So, it was a bit of a coincidence that I happened to look up at the precise moment when everything went to hell in a hand-basket. All the characters were standing around congratulating one another on the success of their most recent mission, and then one of the main characters was suddenly shot in the chest. No reason for it at all. Just one of those random, no-meaning-behind-it acts of violence. And then the character died. Actually died. It was…unexpected, to say the least. I was upset, of course. But more than that, I was impressed. Japanese videogame designers, infamous for their implausible “miracles-can-happen-if-you-truly-believe-in-the-power-of-friendship” plot devices, are not known for such shocking story developments.

And maybe the tragedy of that moment was part of a larger theme that really made me think twice about the game. Although the characters are (mostly) very capable soldiers, watching them, there is this strange sense that they shouldn’t be. In a different world, in a different time, you truly believe that they would have led normal, peaceful lives. A baker, a singer, a farmer, and an ecologist…these aren’t the people you would expect to carry arms voluntarily. There is little thirst for blood—only a grim sense of duty and a quiet understanding that if they don’t fight back, they will be swept away by the tide of an insidious invading power. Watching the game unfold, the true cost of war quickly became very apparent to me, and it made me like the game that much more.

Of course, The Valkyria Chronicles isn’t all gloom and doom. Parts of this game are quite entertaining. Actually, let me rephrase that. Parts of this game are extremely entertaining because of the effect they have on a certain boyfriend of mine. The other night, for example, I spent the vast majority of the evening just listening to him swear loudly (and creatively) at the game for hours on end, which is always quite enjoyable. I even broke out a bowl of popcorn just for the occasion.

So, you may ask, why all the swearing over what I have previously described 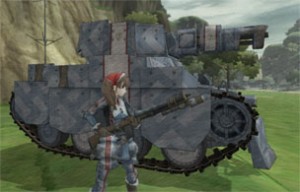 as a truly amazing game? Well, simply put, every army has its duds. There are alot of playable characters in this game, and while some of them really do have a great deal of depth and likeability, many of the others just kind of suck. Take, for example, the girl who refused to shoot an enemy soldier in the battle because she decided to bust out her extra-special “Humanitarian” bonus move (heh, that one alone was good for a solid five minutes of cursing). Or the one who has a special “Misogynist” move. Or the one who’s a blatant racist. They really do run the gamut.

Of course, there are also the in-between characters. These are the guys who are good enough to use in battle (and nice enough that you don’t actively try to get them killed), but who also make you frequently question whether they are really worth all the headaches they cause. My favorite example of this type of character is Ted.

Ted is a Scout-class character. Mike uses him a lot because of his many helpful qualities. For example, Ted can travel long distances in a single turn, and fire a machine gun with a reasonable degree of accuracy. He can crawl through the grass in stealth mode, and pop off a grenade every now and then. He can usually be depended upon to get the job done.

Ted is also an idiot. Ted will run into land mines that every other soldier in your army automatically sidesteps. Ted will use his special “Show-Off” move when no one is watching. Ted is afraid of metal. Oh, and he’s also a bullet magnet. No matter where he is in battle, no matter how well covered, you can bet enemy soldiers will be firing at Ted. In fact, as Mike puts it, the safest place to be in battle is next to Ted, because you will never, ever get hit.

As you can see, the game has a somewhat bipolar emotional range, but all in all, I have definitely been enjoying it so far. Even now, I find myself wondering—caring—how it will all end. Will Welkin and his squad save the day? Will Über-Bitch destroy our heroes? Will Alicia ever get to open her bakery? WILL TED SURVIVE THE GAME??? I wait with bated breath.

Come listen to all the topics that were TOO GOOD for the actual podcast!