If you’ve just finished reading the latest edition of “Versus Mode,” and you’re really interested in checking out the Square-canceled fan-made sequal to Chrono Trigger, Chrono Trigger: Crimson Echoes, then I have some sort of good news for you: You can kind of check it out. 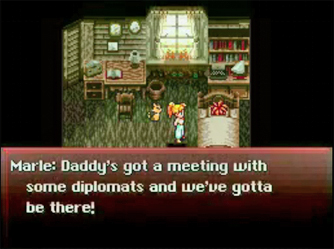 According to GossipGamers.com, an alpha version of the game has been leaked to the Internets, and you can probably find it if you Google around. I did, but I’m not going to post it here, because I don’t want Square to shut us down, too. It’s the very first version of the game that was sent out to beta testers, and it’s missing key things, like some lines of dialogue. Actually, the development team is “embarased” that this version is available publicly, so you probably shouldn’t check it out after all.

I have more sort of good news, though! If you want to see the almost final edition, you can check it out on YouTube. The developers are posting a playthrough video of the entire game, and you can see the first video right here:

To see more videos of the game, go here.

Let's you and me have a little chat about the retail industry. No, no, come on. It'll be fun.