Sorry for the wait, things have been interesting on my end. They always are, but this time it was actually pretty much for the better, so I needed to ride it out as I had new opportunities and positive changes come about in my life. I did do a different article I had hoped to publish here, but Jeddy and I both thought it would be best to wait on it. The review I knew I couldn’t wait any longer on, and to truly capitalize the moment, I choose Mystic Ark—a game that REALLY surprised me and made for much of my Autumn.

By SNES emulation and JRPG standards, Mystic Ark is still something of an obscurity, and it took me years to find a proper translation for it. I remain disgusted at Enix for not porting this over when The 7th Saga and Brain Lord (spiritual cousins to this title) still made it. The most people seem to know or remember about this game is that, due to one of the era’s famous mistranslations, it was assumed Mystic Ark was actually a sequel to 7th Saga. Even if you play the game and find out (SPOILERS!) it is not, you would still be forgiven for thinking at some point it was intended to be. 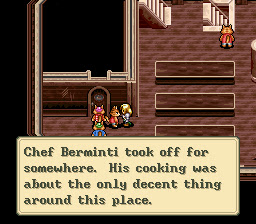 Mystic Ark, to put it simply, would’ve been an awesome release stateside. The development team who made 7th Saga really did their homework on this one and it almost feels like an apology for making 7th Saga not that easy to like in the first place. This game is almost too easy to like (certainly is too easy to play…) and it is VERY engrossing. I somehow put 55 hours on it (of which is very bloated from my end) and apart from getting lost all the damn time, it was still a fairly smooth ride. This game is designed to be very user-friendly where 7th Saga was not.

The premise is certainly delicious and hard not to be curious about. You wake up as a princely-looking thing in a mansion on an island in the middle of nowhere. Many secrets abound in this area and you are guided by the voice of a statue and a fireplace. In the back is a shrine with a closed off door and figurines of warriors. You need to find the 7 MacGuffins that restore power and get you ever so much closer to the mystery at hand. From there, you travel to some of the weirdest worlds ever committed to a Dragon Quest-style RPG and solve their problems so that you obtain the MacGuffin (and I’m calling it that because I forgot what it was) and go on to another world even weirder than the one before it.

What kind of worlds are we talking about? How about a world inhabited by a warring pair of pirate ships (and the pirates are all cats) in a land with no water and a witch named Matoya (umm, yeah) who’s the only person who knows what’s going on, but doesn’t tell anyone. How about a world where cities are made out of fruits and vegetables and crows are as dangerous as a Sturzkampfgeschwader is to London in 1940? A world made out of candy and children? A world split into areas that have either no color or no sound? A world where all the fairy tales live together and have issues you need to solve? A world taking place entirely in another mansion that seems to have no end and throws the whole game into much darker and far more disturbing territory? Yeah, it’s a trip from start to finish. Even the rather lackluster ending is completely left up to interpretation. 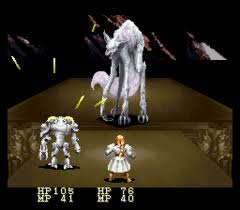 In a lot of ways, the game is structured very much like 7th Saga, but it focuses a lot more on puzzle solving and even embodies a small, fake point and click interface into the mix. I wasn’t thrilled with this at first, but I fully admit now that it adds a whole new dimension and a lot more for the game to be memorable about. Interestingly, unlike a lot of games of this type, you do very little cross-world fetch questing, which both feels like a wasted opportunity and makes the game easier to navigate. It’s not particularly great about telling you what you need to do next and just mostly being isolated to one world helps tremendously.

The battle system is definitely what confused a lot of people into thinking this was a 7th Saga sequel—it’s essentially the same with even a lot of enemy sprites from the former game reappearing (hell, even Lux from the first game is a playable character again!). The difference here is you get three characters to fight with (something 7th Saga definitely needed) and you get a number of special attacks in battle that are really spread across the spectrum of usefulness. Definitely broken but still helpful, almost every character gets something like a double attack, or an attack that can hit considerably harder, or potentially everyone on screen for maybe or maybe not a sacrifice in HP or MP. Either way, it’s definitely easier and smoother to level up when you need to. I lament that this game never truly feels challenging in battle, just frustrating when you’re stuck and no sure where to go, but it plays nice all the same. 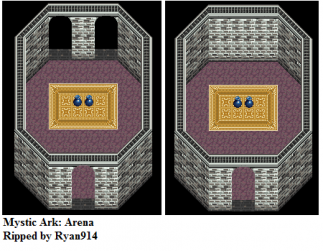 Thank you, Ryan914, for without this picture, the single greatest trial in all the game, I surely would have never made it to the end. >:S

My gripes are pretty minor but numerous—the graphics and even music feel a couple steps down from 7th Saga. Everything looks washed out and not nearly as crisp and TERRIFYING as 7th Saga was. I wish it had a more balanced difficulty instead of swinging one side or the other again, and I REALLY wish the ending could have lived up to what I hoped would happen instead of…well, maybe the developers didn’t have enough resources to finish it epicly and properly ala Black Sigil. It wasn’t a total letdown, but it could’ve been so, so much better with the awesome build up to it.

Give this game a spin if you’re out of everything else—you will be very pleasantly surprised like I was. 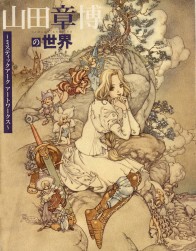 I don’t have anything snarky to add here, just click the picture and enjoy the artwork.

It's the second day of E3!  Yesterday, Microsoft gave a big press conference, and today, Nintendo gave one.  Naturally, they showed footage and announced all sorts of games. Things started with Wii