Jumping across rooftops, avoiding city police, and transferring information. Such is the life of a Runner—an illegal courier in Glass, the city of the future, sterile and austere by appearance but cultivating a seedy underbelly. Faith Connors is one of the best Runners and after recovering from a fall she’s back in the game, walking on the edge of a two-sided coin. Crime on one end, oppression on the other, carefully she treads the… 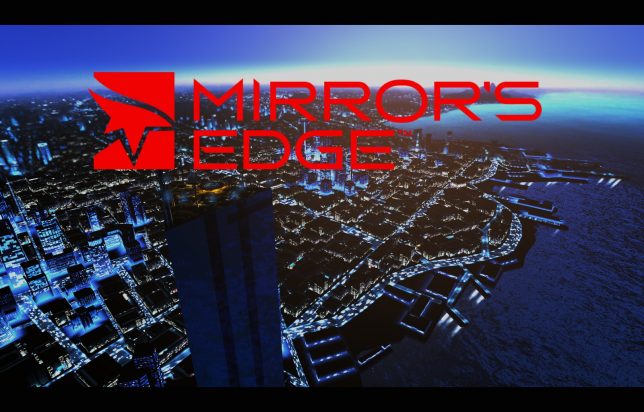 Not Included: The edge of a mirror

Mirror’s Edge is a first-person running and platforming game available on multiple platforms, and is somewhat of a mixed bag. Context-sensitive controls accompany the usual WASD movement keys and mouse controlled camera. While the environments are rather bland, the visuals as a whole are crisp, and sometimes there’s one hell of a cityscape below you. The music is atmospheric, changing between soothing tunes and pulsing rhythm. The story is one of a conspiracy rooted deep within the city’s government, told through daring acrobatics and hectic chase scenes. This is a game published by Electronic Arts, however, so don’t assume that the game is without fault.

Context-sensitive controls change based on what you encounter; red always shows where you need to go, and blue usually means safety.

Mirror’s Edge utilizes context commands to make it more than your typical first-person game. Aside from using WASD and the mouse to move, you also navigate the world through two context-sensitive commands, “jump” and “duck”, each performing different actions in their intended direction. This allows you to react to obstacles in a way similar to the runner genre found commonly on mobile devices. A momentum mechanic exists where the more you move the further and faster you go, and a slow-mo “bullet time” command exists that allows you to plan your move without slowing down. There’s also a clumsy fighting system, and even less elegant shooting mechanics, feeling like rushed additions to already completed game mechanics.

Crisp, if sparse, visuals are a hallmark of the game. Also, cinematography borrows from classic movie moments.

The visuals in Mirror’s Edge are crisp, minimalist, and streamlined, if perhaps a little gamma-heavy on the default settings. The main environments are open rooftops, featuring lots of flat and angled surfaces, though underground and indoor environments are provided. Colors guide you through levels, red being the most common in showing you where to go, blue foreshadowing a level end, and orange foreshadowing incoming enemies and obstacles. Supporting characters have this athletic or stylish aesthetic to them, while antagonists have a very authoritarian and official appearance. While the minimalism helps keep everything easily identified, it also results in a very bland environment. The game ends up looking like a highly-defined sort of plainness, and levels would mentally fade into one another were it not for the cutscenes in between.

During regular gameplay, feet and hands are visible, while cutscenes are told through stylized animated sequences.

The game has a pretty good selection of music in its soundtrack. The themes change frequently depending on the situation, and do not distract from the game. This is essential due to the focus required by the above mentioned gameplay. Lyrics or tunes that draw the mind would only detract from the experience. Thus a soundtrack that’s mostly pulsing ambiance when the action hits is essential, where it can afford to be calming and more noticeable during the slower scenes. When listening to it on its own the soundtrack sticks out, between pulsing beats and soft tones everything is crisp and distinct, yet still ready to vanish underneath your instincts when executing all the game has taught you.

Cutscenes, environmental objects, and behind-the-scenes bonuses explain elements of the story—both that made it into the game, and that got cut.

Mirror’s Edge tries to tell an ambitious story, but somewhere along the way ends up treading water and drowning. We’re first introduced to a story of information control and oppression. Faith Connors doesn’t sabotage government facilities or fight corrupt cops; she’s a courier that uses roof tops to transfer essential packages that contain sensitive documents. Starting off with this novel concept, the player is then suddenly thrust into a narrative about over-regulation and privatization of public services. The two stories never really intersect with each other, and the first one seems forgotten. Never mind that the first chapter, and the title, mentions walking an edge that never seems discussed. The story seems to have gone through several revisions, with the focus and the core themes suddenly changing. What could have been a coherent and powerful narrative was turned bland and confusing, with shells of both stories scattered across the game’s cutscenes and dialogue. Ultimately the story could have been interesting, but what we ended up receiving was thin and poorly executed.

A diverse cast—unfortunately you don’t really get to meet them and learn what motivates them.

Representation is an inexact science, and one you cannot expect every game to handle gracefully. Racially speaking, Mirror’s Edge actually features a varied cast. Unfortunately, other areas of representation are lacking. It’s not surprising given that this is an EA game, but it is disappointing. Chalk this mixed bag up to mainstream games taking the safest route possible—again. Honestly, Mirror’s Edge is a huge mixture of good and bad. Its core gameplay is great, its music is amazing, its visuals are crisp. However, there are gameplay elements that don’t fit in with the core of the game, the visuals are blandly designed, and the story goes nowhere. It feels like a great concept that had executive interference and poor editing. If it stuck to its core gameplay and a single story angle, I feel the experience would have been more worthwhile. Do I recommend this game? Probably not, to be honest. Watch someone play it, but don’t pay for it.

"More games should let you skip the gameplay." - Michael Gray