Well, it’s official. After more than a year of writing for GameCola, I am finally attempting (gasp!) my first actual game review! Truly, this is a momentous occasion. I mean, I’ve definitely reviewed games informally through my column (see: Every “Gamer Girlfriend” Column Ever Written), but this is the first time I have been assigned a game that I played specifically so I could write a review about it. This should be fun!

I shall begin by saying that, overall, Dream Chronicles: The Chosen Child is a very enjoyable game. Now, for those cynics out there who are thinking “she’s just saying that because this is her first review and she doesn’t have the balls to trash it,” I assure you, you are wrong! If you have any remaining doubts, I invite, nay encourage, you to peruse this month’s “Gamer Girlfriend” column, in which I basically rip apart a game that wishes it could be half as much fun as Dream Chronicles. So there. 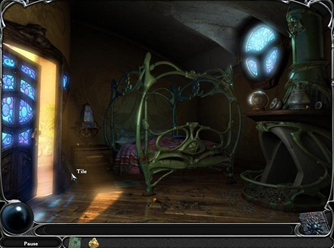 Dream Chronicles is based on a simple point-and-click mechanic, a fact for which I was extremely grateful while playing. In my defense, I’ve been dating my gamer boyfriend for a while now, and while I am no longer completely hopeless with a PS3 controller, I do still resort to panicked button mashing on occasion. This strategy does occasionally work (e.g. Kingdom Hearts), but for the most part, it only succeeds in frustrating me. As a result, I really did enjoy playing a game where I didn’t have to struggle with the controls. Actually, the only point at which the control mechanic didn’t work well was during one sequence in which the game inexplicably shifted from scenic frames to a 3-D immersive background. As your character progresses through a series of labyrinthine tunnels, you have to click every time you take a step. Trust me when I say that this gets old really quick.

In terms of graphics, Dream Chronicles is fairly static. The first-person point of view means that your character never actually appears onscreen, and there is almost no interaction with other characters. As a result, there is minimal movement on the screen, and the few animations the game uses are recycled as much as possible. Despite its simplicity, I actually really enjoyed the game’s detailed artwork, although from a practical standpoint, it definitely made the game a lot trickier. Throughout the game, you are required to solve many puzzles, most of which involve finding hidden objects. Given the complexity of the background graphics, some of these objects are REALLY well hidden, and I often found it difficult to distinguish “prop” from “setting. ”

I was far less ambivalent about the game’s music, which I really liked throughout. Apart from being pretty, it’s an effective, yet subtle, way of telling the game’s story. There is no voicework, so the music is crucial in establishing and developing the mood throughout the game, and it does that very well. In the beginning of the game, the music is fairly light and soothing, but it gets progressively creepier as the game begins to take darker turns. It made me feel more immersed in the game, and kept me emotionally invested through to the end. 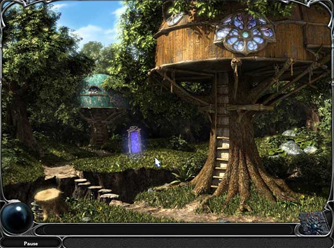 The story of the game is interesting, but certain parts of the plot really feel underdeveloped. For instance, throughout the game, some invisible, malevolent force kept trying to hinder my puzzle-solving. It was presented as one of the game’s central mysteries; however, its origin was never actually explained. It turned out that the person I thought was doing it actually wasn’t, so I was left wondering what the hell had been happening throughout the game.

That was by far the largest plot hole, but it certainly wasn’t the only one. For example, early on in the game, I noticed a tree house next to my character’s home. When I clicked on it, all my character would say was that the neighbor who lived there “kept to himself.” It seemed a very strange thing to say without any kind of additional explanation. I mean, in a game that is so clearly minimalist in its design, why would you include a detail like that and then not make use of it? It made me wonder if the tree house was perhaps a reference to a previous game, as I could think of no other purpose for having it there. On another occasion, my character ventured into the “Herbalist’s house,” which was completely empty, despite obvious signs that someone lived there and was there recently. For some reason, it was never explained where the inhabitants went or why it was OK for strangers (like me!) to use their house to make potions. I found it kind of unsettling.

Despite my minor concerns over plot holes, my biggest beef with the game was that it was too short. It only took a few hours to play through the whole thing, and I was actually able to go back and replay it in under an hour. In addition, the game’s ending was way too abrupt. I headed over to the Herbalist’s house to mix a potion, sprinkled it on a strategic tree root, collected a cute teddy bear, and WHAM!, the game suddenly flashed to a cutscene in which I was reunited with my missing family. I mean, yay for being with my family, but it happened so fast that it wasn’t very satisfying. Plus, there was an extra little twist at the very, very end that made me feel like the only real purpose in the ending was to set up the next game in the series.

Overall, I thought Dream Chronicles: The Chosen Child was fun, but ultimately disappointing. Apparently, this is the third game in the Dream Chronicles series. If all the individual games were combined into one, it might actually be worth buying. Until then, however, I would stick to the free online demos.

There's a reason Secret of Mana's one of the few SNES games with a soundtrack release in North America.